PC News Destroyer Command, SH2 Interoperability Update
Today Ubi.com is releasing a new and improved version of the game service application. This new version will provide the interoperability of Destroyer Command and Silent Hunter II as well as a number of new features to enhance the online gaming experience including improved ping time updating, an improved detailed view of game session information, and other features.

Microsoft To Join The Centennial Of Flight Celebration
Microsoft Corp. and EAA The Leader in Recreational Aviation today announced that Microsoft plans to provide technology and support for EAA s Countdown to Kitty Hawk presented by Ford Motor Company. Microsoft is developing a computer model of the Wright brothers 1903 Flyer that will work in its award-winning Flight Simulator software.

The model will enable the pilot to experience the 1903 Flyer just as Orville and Wilbur Wright did. To fly the virtual aircraft, the pilot will lie on his or her stomach in front of a giant projection screen depicting the sand dunes just outside of Kitty Hawk, N.C. The pilot then will use hand levers and a shifting hip mechanism to control the virtual Flyer and practice take-offs and landings. Those movements will control the Microsoft Flight Simulator version of the 1903 Flyer just as a computer joystick operates the flight controls on other aircraft in Flight Simulator.

Microsoft s simulation of the 1903 Wright Flyer is scheduled to be part of EAA s Countdown to Kitty Hawk touring pavilion that will premiere at the 2003 Sun n Fun Fly-in in Lakeland. The pavilion is scheduled to make several other stops at significant events and celebrations such as EAA AirVenture Oshkosh 2003, Ford Motor Company s 100th Anniversary Celebration in June 2003 and Inventing Flight: Dayton 2003. The tour will culminate at the First Flight Centennial Celebration event on Dec. 17, 2003 at the Wright Brothers National Memorial near Kitty Hawk, made possible through a partnership with the National Park Service.

Tactical Ops: Assault on Terror Goes Gold
Infogrames' Microprose division has announced that Tactical Ops: Assault on Terror has gone gold and will soon ship to stores. The game is a retail stand-alone version of the popular Tac Ops mod for Unreal Tournament, and it features new maps and skins, enhanced graphics, and improved code and animations. Like the popular Half-Life: Counter-Strike team-based shooter, Tac Ops lets players assume the role of a terrorist or an antiterrorist special forces soldier, and they must work with a team of other players in order to complete certain objectives, such as rescuing hostages, defending vessels, and capturing hideouts. In addition to the multiplayer mode, the game will include a complete single-player campaign.

Codemasters Delays Games
Codemasters has released a new 2002 release schedule that extends the target release dates for several of its upcoming games. The release of IGI 2: Covert Strike, its upcoming first-person shooter sequel in development at Innerloop Studios, has been pushed from May into June. Prisoner of War, Codemasters' stealth action game in development at Wide Games, was previously scheduled for release in June but is now scheduled for release this fall. The extended release dates are considered general delays in development rather than any specific problems or changes.

World War II Renamed
Codemasters has announced that its upcoming real-time strategy game World War II is now titled World War II: Frontline Command. The game, which is in development at UK-based Bitmap Brothers, was originally known as World War II: D-Day to Berlin. The publisher did not specify a reason for the name change. World War II: Frontline Command will let players command Allied forces in some of the war's most significant battles. The game uses a system that gives individual soldiers and units morale attributes such as heroism, confidence, despair, and cowardice. The game is scheduled for release at the end of 2002.

The War Engine Patch 1.03 Released
Shrapnel games announced the release of the newest patch for the War Engine. This patch, v1.03, adds features, AI changes, enhancements and fixes all known bugs. Besides fixing bugs, the AI has been tweaked, a driver for transports option has been added to units and the campaigns random-scenario functionality has been expanded, all at the requests of gamers. For a complete list of additions and fixes please go to Shrapnel Games

Commenting on events, Bob Haslam, Managing Director Eurofighter GmbH stated "The first flight of an IPA aircraft is an important stage in the Eurofighter Typhoon programme. It serves as a mark of our progress and commitment to delivering production standard aircraft to our customers. We must maintain this drive and commitment to meet the expectation of our customers in delivering service aircraft in 2002." 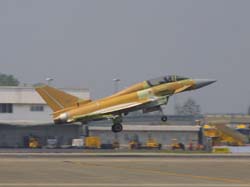 The aircraft was an instrumented twin-seater for in-flight evaluation of the basic configuration.

The Eurofighter Typhoon IPA 2 is the first aircraft to fly covered by an umbrella production contract for 620 aircraft. Production deliveries will begin to the four Eurofighter Typhoon partner countries in Germany (180), Italy (121), Spain (87) and the United Kingdom (232) in the second half of 2002.

JASSM ready for Independent Operational Test and Evaluation
Lockheed Martin's Joint Air-to-Surface Standoff Missile (JASSM) continues its testing at White Sands Missile Range in New Mexico. The latest test demonstrated its operational capabilities by attacking a hardened bunker. The missile penetrated the bunker structure and detonated as would be required in an actual engagement.

Following other hardened bunker in May and December 2001, this test is the last in the development series and JASSM will now enter the Independent Operational Test and Evaluation (IOT&E) phase.

"JASSM has proven itself to be a highly effective weapon," said Col. Tim Moore, JASSM Joint Programme Office programme director based at Eglin Air Force Base, Fla. "We look forward to proceeding with IOT&E tests, then deployment. The target template was created by the user and the mission included both development test and operational test participants in the control room. I believe that the IOT&E phase will further validate JASSM against difficult targets using real-world scenarios and CONOPS."

JASSM is a 2,000-pound class weapon with a dual-mode penetrator and blast fragmentation warhead. It cruises autonomously in adverse weather, day or night, using an anti-jam GPS navigation system and a state-of-the-art infrared seeker to find a specific aimpoint on the target. Its stealthy airframe makes it extremely difficult to defend against. The missile is planned for deployment on B-1, B-2, B-52, F-16, and F/A-18 aircraft and has a range of over 200 miles.

JASSM is currently in Low Rate Initial Production with first units available to the US Air Force next year.

"JASSM provides the Air Force with the ability to strike a wide variety of targets," said Larry Lawson, vice president of Strike Weapons at Lockheed Martin Missiles and Fire Control. "The bunker target in this test is typical of what JASSM will be used against in its first strike, first day of conflict role. We have also demonstrated success against small to large and hard to soft targets such as air defence sites."

"Today's successful flight test not only illustrates the tremendous war-fighting capability that the MH-60R brings to the fleet, but provides clear evidence that the Romeo team continues to make significant progress on the road to a Milestone III decision in early 2005," said Peter Schultz, president, Lockheed Martin Integrated Systems.

The MH-60R weapon system represents four decades of U. S. Navy helicopter evolution and is the centrepiece of the US Navy's Helicopter Master Plan and Concept of Operations. Today there are six MH-60R aircraft in testing; three test aircraft are at Naval Air Warfare Centre, Aircraft Division, Patuxent River in Maryland for development and operational tests, and three test aircraft are at Lockheed Martin Systems Integration - Owego for integration and test. The MH-60R programme is worth approximately $7 billion and encompasses the production of approximately 243 aircraft.