Airborne Assault Announced
Battlefront.com and developer Panther Games are proud to announce Airborne Assault  Red Devils over Arnhem, an operational level real-time wargame about the final leg of Operation Market Garden Players can take command of the British Airborne forces (the Red Devils) as they struggle to seize control of the strategic Rhine river crossing at the Dutch town of Arnhem in September 1944 or rally the desperate German forces as they try to repel the airborne invaders. Airborne Assault has officially entered Beta status, and is scheduled for release this summer. As usual, it will be available only from Battlefront.com and is not being sold in retail. 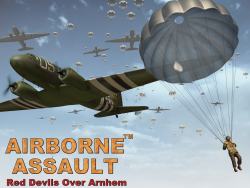 Realistic Command & Control, multiplayer support and unprecedented historical detail allow the players to jump right into history and change the outcome of one of the most daring operations of the war. Panthers Dave O'Connor says "We aim to bring a high level of realism to this genre. Our unique command and control systems, sophisticated artificial intelligence and easy to use interface provide the gamer with a very rich, realistic and rewarding game experience. The emphasis is on fun but our motto is: When realism counts ".

The MRAAS, envisioned by the Army as a highly lethal capability to be in incorporated into the Future Combat Systems program, will provide Line of Sight, Beyond Line of Sight and Non-Line of Sight fire capability on a platform that can be carried on a C-130 aircraft. The TMM weapon control system will provide the required weapon pointing control, accuracy and fires efficiency while operating in direct and indirect fire modes with new munitions and a new gun system.

VLS Single Cell Launcher in Development
Lockheed Martin and United Defense are developing a new Single Cell (SCL) launcher for ships either too small for the traditional eight-cell MK 41 Vertical Launching System (VLS) or with mission requirements not requiring an eight-cell launcher.

The SCL is designed to provide an affordable solution for improved ship self defense requirements on aircraft carriers, large-deck amphibious ships, and other smaller surface combatants, such as corvettes and frigates. SCL is based on proven MK 41 technology and incorporates the latest Baseline VII Launch Control System (LCS), and other Computer-off-the-Shelf (COTS) components.

SCL will integrate the MK 25 Quad Pack Canister, capable of accommodating the launch of four Evolved Sea Sparrow Missiles from one missile cell. The MK 25 has already been integrated with the MK 41, providing Lockheed Martin engineers the experience to manage a successful integration with the SCL. Because of its single cell modularity, the SCL can be configured in any number to meet the defined mission.

Dale Bennett, vice president and general manager, NE&SS-Marine Systems, noted that "The US Navy already has over 20 years and $500 million invested in the MK 41, and any potential SCL customer will truly benefit from the shared components, technical and logistics support currently in place. The fact that the MK 41 is found aboard 16 different ship classes in 11 navies world-wide speaks volumes about our experience and global acceptance in the launcher business."

A prototype of the SCL is scheduled for completion later this year and a restrained test firing will be conducted in late 2002 or early 2003.

Hungary Joins NATO Flying Training in Canada
The NATO Flying Training in Canada (NFTC) programme has expanded again with the decision by the Hungary Air Force to sign on for the training of its pilots in Canada. Hungary's participation in the NFTC programme was formally concluded yesterday at a signing ceremony in Budapest between Canada's Chief of the Defence Staff, General Raymond Henault, and the Hungarian Chief of the Defence Staff, General Lajos Fodor.

Under a 17-year arrangement, starting in 2003, Hungary will send seven beginner pilots per year to be trained under the basic phase of the program. Most of those students will go on to tactical fighter lead-in jet training, while the remaining Hungarian graduates of the basic phase will receive helicopter training depending on the requirements of Hungary's air force. (This latter training is conducted at Southport (Portage La Prairie), Manitoba.) 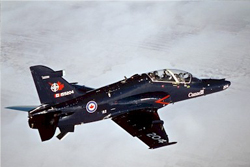 Equally, seven Hungarian air force pilots will serve as instructors within the three phases of the NFTC training programme. As well, some experienced Hungarian pilots will undertake the advanced and tactical fighter lead-in phases of NFTC over the next three years.

Hungary's decision to join NFTC broadens the international character of the programme, with its pilots joining those from the air forces of Canada, Denmark, Great Britain, Singapore and Italy. The Hungarian participation in NFTC also means that additional training aircraft will be required, specifically two more CT-156 Harvard II turboprops (Raytheon T6A) and two more CT-155 Hawk jets (BAE Systems Hawk 115), to meet the Hungarian requirement. This will bring the total number of Harvard II and Hawk aircraft to 24 and 20 respectively, located at 15 Wing Moose Jaw, Saskatchewan and 4 Wing Cold Lake, Alberta.

"Only a few years ago we were pleased to welcome Hungary as one of the new-NATO members, and today, we're delighted to welcome them into the international NFTC family," said the Honourable Art Eggleton, Minister of National Defence. "The training its pilots will receive alongside the other NFTC participants is the best available anywhere, and will contribute to an enhanced interoperability among the air forces of both NATO and non NATO nations in future coalition missions throughout the world."

The (Cdn) $3-billion NFTC program, currently in its third year of providing training to NATO and non-NATO pilots, is an alliance.