New Screens: Sudden Strike 2
Take a look what you will be able to do with your airplanes in the upcoming RTS Sudden Strike 2. As a pilot in WW II you have the following options; either take off and land your airplanes on runways; transport your parachutist units and drop them off where they are required to fight; unleash hell as you drop your payload of bombs onto the enemy, and in case the enemy hits your runway just to annoy you don't worry, just repair it. Screenshots

SH2/DC V4.0 Data Packs
Naval Warfare Simulations has released the NWS SH2/DC V4.0 Data Packs which are compatible with the latest official V1.1 SH2/DC patches and online play. Several changes have been made to compensate for the updates in the patches to maintain balance and accuracy.

Fishtank to Publish Silent Storm
Fishtank Interactive has announced that it will publish Silent Storm, the World War II turn-based tactical strategy game in development at Nival Interactive. The game lets players control a group of elite soldiers on a series of missions deep behind enemy lines in Europe. "Set in World War II, Silent Storm embodies the excitement of a secret mission deep in hostile territory," said Jerry Wolosenko, head of Fishtank Interactive activities in North America. "Players wage clandestine battles for months without duplicating a mission. The range and possibilities for this game are endless."

Silent Storm will include two independent campaigns--one each for the Allied and Axis forces--and each campaign will feature more than 40 different soldiers in six different character classes. Missions will take place in a fully interactive 3D gameworld that lets players engage in battle on open ground or in and around buildings, including underground dungeons and destructible multiple-story structures. The game's physics engine will provide realistic object destruction and accurate bullet tracing based on the type and speed of the projectile and the properties of the materials being penetrated. In addition to the two single-player campaigns, the game will include a complete 3D map editor. Release date: Spring 2003. Screenshots

Military News DOD Clarifies Origin Of GPS System
During a DoD press briefing, on March 20th, information was presented regarding the recovery of a Global Positioning System (GPS) unit by U.S. forces conducting a search of a cave in the Operation Anaconda area. Initial indications that the GPS unit potentially belonged to a U.S. servicemember killed in Somalia several years ago have now been determined to be inaccurate. 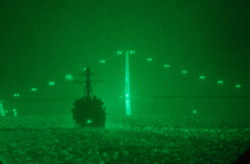 "What we planned to do in Strong Resolve was to exercise NATO's ability to conduct two very different operations simultaneously," Dawson said. "These missions encompassed the full spectrum of NATO missions. We also set out to implement and validate NATO's afloat CJTF capability. We were successful on all counts, and I think all participants had a tremendous learning experience."

For this exercise, the SFL staff was augmented by more than 450 personnel from all 19 NATO nations and 12 PfP nations, including Austria, Bulgaria, Estonia, Finland, Latvia, Lithuania, the Slovak Republic, Romania, Slovenia, Sweden, Ukraine and Uzkebistan. PfP integration for Strong Resolve 2002 was at the highest level for any exercise ever.

Mount Whitney received the additional personnel during a port call in Kiel, Germany, and SFL personnel provided them with shipboard orientation and training on NATO operations and all facets of the exercise.

The augmentees quickly integrated into the staff, and became invaluable participants in the conduct of the exercise, as they also got used to shipboard life and interacting with personnel from all military branches of more than 30 nations.

Petty Officer Wendy (Wren) Whitney, from United Kingdom's Royal Navy, served as a maritime command and control information system operator during the exercise. "It was very enjoyable," she said. "I met many different people from all different nations, and learned a lot about using Powerpoint and various other Microsoft systems. All of this gave me a very good insight into the exercise."

Polish Army Lt. Col. Miroslaw Lusiarczyk said all of the service branches and all of the nations worked very well together. "I was very glad to participate," he said. "It was a great experience, and helped prepare me for the real situation."

Strong Resolve 2002 was the largest NATO exercise hosted by Poland since that nation joined the alliance three years ago. In fact, the third anniversary of Poland's entry into the alliance was observed while the exercise was being conducted. Dawson praised the nation for being an outstanding host.

"Poland has done a tremendous job hosting this exercise," he said. "When Polish President Aleksander Kwasniewski visited our flagship last week, I had the opportunity to thank him and the Polish people for the great support they provided throughout the exercise. They were very generous in providing air, maritime and land training ranges, and also provided significant support in providing ground forces, maritime assets (10 ships) and air assets (14 aircraft)."

In addition to the Polish president, SFL hosted more than 130 NATO and Partnership for Peace officials from 38 different nations aboard the flagship during a brief port call to Gdynia. These officials included Italian Adm. Guido Venturoni, chairman of NATO's military committee; Army Gen. William Kernan, Atlantic supreme allied commander, and many of the military and political leaders of NATO and PfP nations.

The officials received a brief on the progress of the exercise, and briefings on the SFL staff structure and responsibilities, including an extensive overview of the staff's role as a NATO CJTF parent headquarters.

Romanian Army Lt. Col. Ilarian-Moria Costache, an engineer, said his experience in Bosnia helped him adjust quickly to the pace and scenario of Strong Resolve 2002.

"It was very easy for me to switch to the notional scenario because of my experience in real life," he said. "Engineers are always prepared, and there is a common understanding between all engineers, regardless of their nationality."

Air Force Maj. Tony Forkner, an F-16 pilot, worked in the Joint Forces Air Component Command aboard Mount Whitney. Although getting used to shipboard life was a challenge, he said the benefits were worth it.

"This exercise has brought a whole new perspective for me on working not only with other U.S. military men and women, but also with a wide variety of nations," he said.

These new perspectives were a common theme for all participants. A new appreciation for other service branches, combined with a new understanding and appreciation for NATO and PfP allies, made this two-week exercise a memorable, productive and rewarding experience for all who took part. 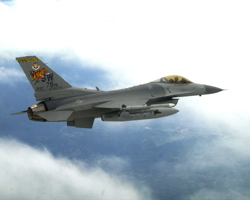 The aircraft crashed in a flat, wooded, unpopulated area along a logging road near Lanscheid, Germany. There were no injuries or apparent damage to personal property on the ground. At the time of the accident, visibility in the area was 5 miles with light rain and fog. A memorial service is scheduled for March 24 at the base here.

A board of Air Force officials will investigate the accident