Fighting Steel Project Updated
Naval Warfare Simulations has announced a major update to the Fighting Steel Project. For the first time in WWII 3D naval combat history the French Navy proudly sails once more in using one of the most realistic gunnery combat models ever designed. The new ship classes include the MNF BB Richeleiu, BB Bretagne, DD Le Fantasque, and CA Suffren. Also included is the most deadly torpedo cruiser ever built during WWII.. the IJN Kitakami class with 40 torpedoes! NWS has also added the last of the Royal Navy battleships, the RN BB Vanguard. The 39 knot IJN Shimakaze class is also included. All this and over 20 gunnery combat updates, improved custom ship textures with flags, and improved night combat. NWS also plans on having the Italians, Dutch, Russians and other navies coming soon. This does not even include the upcoming WWI battles, pre-dreadnoughts, Civil War, and possibly even sailing ships.

Eurofighter Typhoon Patch v2.1
Another patch for Eurofighter Typhoon has been released, now updating Rage Software's modern combat flight sim to version 2.1. This release should address the joystick, throttle and WinXP problems better than before, but just in case a joystick problem remains after that patch there's also a small registry fix that should remedy this. Download

COMBATSIM.COM Subsciber Benefits Update
COMBATSIM.COM subscribers now offers a 2 year subscription to MiGMan.com for the price of 1 year. Click here for details. Military News Missile Intercept Test Successful
The Missile Defense Agency (MDA) announced today it has successfully completed a test involving a planned intercept of an intercontinental ballistic missile target. The test took place over the central Pacific Ocean on March 15. A modified Minuteman intercontinental ballistic missile (ICBM) target vehicle was launched from Vandenberg Air Force Base, Calif., at 9:11 p.m. EST, and a prototype interceptor was launched approximately 20 minutes later and 4,800 miles away from the Ronald Reagan Missile Site, Kwajalein Atoll, in the Republic of the Marshall Islands. The intercept took place approximately 10 minutes after the interceptor was launched, at an altitude in excess of 140 miles above the earth and during the midcourse phase of the target warhead's flight. This was the fourth successful intercept for the Ground-based Midcourse Defense (GMD) Segment, formerly known as National Missile Defense. 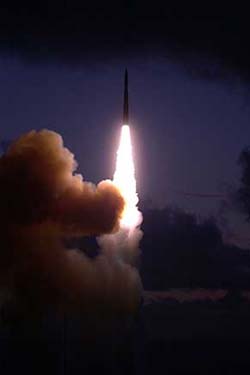 The test successfully demonstrated exoatmospheric kill vehicle (EKV) flight performance and "hit to kill" technology to intercept and destroy a long-range ballistic missile target. In addition to the EKV locating, tracking, and intercepting the target resulting in its destruction using only the body-to-body impact, this test also demonstrated the ability of system elements to work together as an integrated system. The test involved the successful integrated operation of space and ground-based sensors and radars, as well as the Battle Management, Command Control and Communications (BMC3) function to detect the launch of the target missile, cue an early warning radar to provide more detailed target location data; and integration of a prototype X-Band radar (based at Kwajalein) to provide precise target data to the EKV, which received the target updates from the In-Flight Interceptor Communications Systems (IFICS) at Kwajalein.

The EKV separated from its rocket booster more than 1,400 miles from the target warhead. After separation, it used its on-board infrared and visual sensors, augmented with the X-Band radar data provided by BMC3 via the In-flight Interceptor Communications System, to locate and track the target. Sensors aboard the EKV also successfully selected the target instead of three balloon decoys. Only system-generated data was used for the intercept after the EKV separated from its booster rocket. A C-band transponder aboard the target warhead did not provide any tracking or targeting information to the interceptor after the interceptor was launched.

This test is a major step in our aggressive developmental test program, and is the fourth successful intercept in six attempts. We will continue to pursue this testing regime to achieve a layered approach to missile defense, using different architectures to deter the growing threat of ballistic missiles carrying weapons of mass destruction.

Over the next several weeks, government and industry program officials will conduct an extensive analysis of the data received during the flight test to determine whether anomalies or malfunctions occurred during the test, evaluate system performance and determine whether or not all flight test objectives were met. Since the system is in the developmental phase of design and testing, performance of individual elements and the overall system integration was as important as the actual intercept.

Test Team Prepares CV-22 For Flight
A diverse team of flight-test experts at Edwards Air Force Base in California are working toward a common goal, returning the US Air Force version of the V-22 Osprey to flight this summer. Pilots from the test and operational worlds, along with a cadre of handpicked engineers and mechanics, are preparing the CV-22 to resume flight-testing here in July. Flight-tests of the Air Force version were halted after a V-22 crash in December 2000 grounded the entire Osprey fleet.

Since then, the integrated test force here has been working to correct those deficiencies in the aircraft that were identified through a US Marine Corps operational evaluation and the Defense Department's blue ribbon panel of experts. The Secretary of Defense formed the independent panel of defense and industry experts after the December 2000 crash to evaluate whether the programme should go forward and, if so, what deficiencies needed to be corrected. 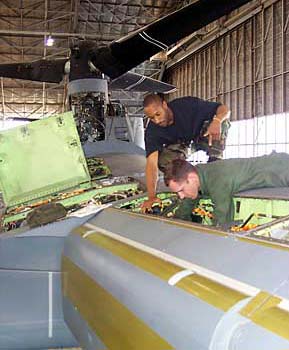 Today, the CV-22 test team is set to resume the engineering, manufacturing and development phase of the CV-22 acquisition program. Before the flight-test programme resumes, the test team will perform the necessary flight-checks to ensure all maintenance actions taken were performed properly.

Testing will pick up where it left off in 2000 with an emphasis on the aircraft's radar capabilities, said Maj. Todd Lovell, commander of the 18 Flight Test Squadron's Detachment 1 here. The 18 FLTS is a special operations test squadron based at Hurlburt Field, Fla. Lovell and his team are working with the Air Force Operational Test and Evaluation Centre's Det. 5 and the 418th Flight Test Squadron both at Edwards.

"Because the aircraft hasn't flown since late 2000, we will have two initial shake-down flights," Lovell said. "After that, we will resume developmental testing with a goal of moving the programme toward operational tests scheduled for 2006."

In the meantime, CV-22 mechanics and engineers continue to correct the deficiencies outlined by the Department of Defense. Much of the test team's work is focused on tubing and wires that were positioned too closely to other materials in the aircraft. The close proximity of the wires eventually led to chafing. Mechanics working on the two test aircraft here have been changing the routing and placement of the wires to create a free zone around them.

Air Force officials have plans to acquire 50 CV-22s to replace its fleet of MH-53J helicopters used to insert and extract special operations forces from hostile areas. The first production aircraft will go to the 58th Training Squadron at Kirtland AFB, where they will be used for CV-22 advanced aircrew training.