"When the Silent Hunter II update containing the game link feature is released in about two weeks, the world will know who the true kings of the ocean are as Silent Hunter II's experienced pack of submariners square off against a fleet of new destroyer commanders," said Carl C. Norman, executive producer for Ubi Soft Entertainment. "Hopefully the destroyer commanders will use the next two weeks to master their new ships' capabilities -they're going to really need the experience to win this war."

Bridge Commander Goes Gold
Activision has announced the latest space combat sim, Star Trek: Bridge Commander, has gone gold and is on its way to manufacturing. The game puts the player in command of a Galaxy-class starship tasked with identifying the cause of a mysterious solar eruption that destroyed a Federation colony. During the journey, players battle the Romulans, align with the Klingons, investigate the treacherous Cardassians, and reveal a secret plot that threatens the balance of power in the Alpha Quadrant. [More...] 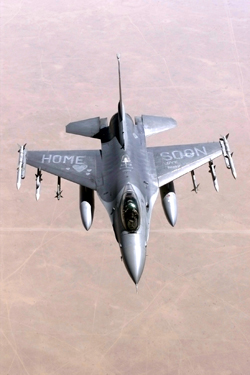 An F-16 Fighting Falcon from Cannon Air Force Base, N.M., sends a Valentines Day message to the people back home while patrolling the no-fly-zone over southern Iraq. Members of the Air Force, including the 523rd Fighter Squadron, routinely go overseas for 90-day rotations in support of operations. Operation Southern Watch is supported by about 13,000 men and women in uniform. (Photo by Tech. Sgt Jack Braden)

This is the first of 10 aircraft being upgraded from the Block 10 configuration to Block 20 with commercial off-the-shelf (COTS) data processing capability.

Lockheed Martin To Upgrade 35 US MLRS Launchers
Lockheed Martin Missiles and Fire Control has received a Low Rate Initial Production-V (LRIP-V) contract worth $69.4 million to upgrade 35 of the US Army's existing Multiple Launch Rocket System (MLRS) M270 launchers to MLRS M270A1s. Delivery of the launchers will begin in December 2003 and be completed in June 2004.

The US Army currently has more than 850 MLRS M270 launchers in its inventory, with plans to upgrade more of them to M270A1s. "The M270A1 upgrade demonstrates the Army's confidence in our team and the products we deliver," said Ron Abbott, vice president - Fire Support for Missiles and Fire Control.

The M270A1 upgrade includes an Improved Fire Control System (IFCS) that features a Global Positioning System (GPS), as well as the ability to process data from smart munitions within tactical timelines. Operational Testing of the MLRS M270A1 was competed in October 2001.

The system incorporates the Improved Launcher Mechanical System (ILMS) upgrade, which reduces the time needed to aim and reload the launcher. In a typical fire mission, the ILMS-equipped launcher is six times faster than the current M270 launcher. Reload time is decreased by more than 30 percent. Crew and launcher survivability should be enhanced because exposure time on the battlefield will be reduced.

Night-Vision Device Aids Downed Aviators
US Air Force pilots no longer have to grope around in the dark behind enemy lines, hoping to avoid capture, thanks to a new night-vision device that has recently been approved for use. The Evader, a night vision imaging system, is now part of an Air Combat Command aircrew member's survival vest ensemble.

"Scott O'Grady couldn't see his rescuers," said Maj. Al Gracia from the Human Systems Programme Office, referring to the downed Air Force pilot's 1994 ordeal in Bosnia. That CSAR operation magnified certain search and survival technological deficiencies that have since been addressed. Before the new system, downed Air Force pilots had been without a survival night-vision device. 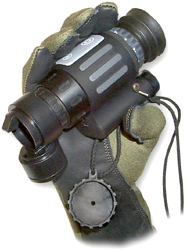 Gracia's warfighter requirements and new technologies integrated product team assessed the Evader, a commercial off-the-shelf device, because of an urgent ACC request. "An F-117 [Nighthawk] pilot, shot down over Kosovo in 1999, during a (post-rescue) debriefing, identified some big deficiencies -- the ability to evade the enemy and see rescuers at night," Gracia said.

"ACC contacted us in early 2001, recommending this device...," said Richard Rousett, SPO IPT requirements programme manager. "Once we got the requirements, we identified and coordinated tests to evaluate the device."

He said ACC officials wanted them to evaluate the multipurpose Evader, produced by Emmaus, a Pennsylvania-based night-vision equipment company. The company claims Evader is the only night-vision system in the world designed specifically to meet military requirements for survival, evasion, resistance and escape.

Operating on two double-A batteries, Evader is smaller than most survival radios, Gracia said. It weighs less than 15 ounces, uses infrared imaging technology, and features both a compass module and a covert signalling capability.

The device passed a series of rapid decompression, windblast and sled tests, said Al Gonzalez, SPO IPT member. ACC headquarters was subsequently granted an interim safe-to-fly approval for one year. The recommendation allows Evader to be used on all combat Air Force SRU 21/P and Air Ace survival vests for contingency operations only.

"In the future, we're looking at full safe-to-fly certification that will allow its permanent use on life-support ensembles," Gracia said.

The system includes several high-fidelity simulation cells for a variety of tanks and armoured vehicles that are networked together. Each simulator covers a 360-degree field of view and the visual display includes high-resolution geo-specific databases created from satellite imagery.

"We view the success of the simulator farm as an opportunity to further expand penetration of our ground force simulators worldwide, "said BVR Systems' Chief Executive Officer Yoel Katzir. "The successful completion of the simulator positions BVR as a major player in two important segments of the military training and simulation market: ground forces and the fast-growing Distributed Mission Training (DMT) arena."

The simulator farm enables trainees to develop their weapon proficiency, tactical skills and manoeuvres. They can conduct team training at the basic employment level or practice complex combat scenarios at the mission employment level. The Armour Gunnery & Tactical Simulator may even provide more effective training in areas that traditional methods are unable to deliver due to cost factors, and logistics.

This simulator is designed in a re- configurable "roll in roll out" technology, which enables the simulation of a variety of armoured vehicle types using the same hardware infrastructure through a simple "plug and play" process. The tactical environment is achieved through BVR's computer generated forces (CGF).