PC News HOTAS Cougar Resource Site Launched
Dr. James Hallows has launched Cougar World. Cougar World is the the ultimate resource centre for the Thrustmaster HOTAS Cougar. The site features, forums relating to the release of the Cougar, rudder pedal compatibility, pre-ordering information, etc. You can keep up-to-date with what's going on from the "Latest News" and "Current Status" sections, and common questions like will the Cougar work on Windows XP / the X-Box / my Palm Pilot are answered in the Frequently Asked Questions (FAQ) sections. Cougar World is currently in its pre-Cougar release version, and therefore, until the Cougar is released in March 2002, certain areas of this site will only come online at that time.

STMicroelectronics Withdrawing From PC Graphics
STMicroelectronics will withdraw from the PC graphics chip market, and is currently looking for a buyer for that part of its business, which produced and sold the Kyro and Kyro II graphics chips. Kyro II graphics cards were announced by ST and Hercules last spring and quickly gained some attention for providing a surprisingly high level of game performance at a low price point. The Kyro chips are based on an PowerVR's efficient tile-based architecture, which was also at the heart of the Dreamcast's graphics.

In North America, Hercules has been the primary producer of Kyro and Kyro II cards, which were marketed under the names 3D Prophet 4000 and 3D Prophet 4500. The company issued a statement assuring continuing supplies of the cards: "Hercules 4000 and 4500 series cards will continue to be available to you and your customers as we have secured ample inventory to fulfill everyone's needs. For the future, we will work with selected vendors in developing and marketing advanced, quality Hercules branded products." Hercules went on to mention that there's an additional Kyro II product on the way, the 3D Prophet 4800, which would likely use stored- up supplies of the ST chip. We'll have information on this new card as it becomes available.

X-Plane Demo/Upgrad 6.06 Available
The latest demo/upgrade version 6.06 for X-Plane, the comprehensive flight sim by Laminar Research, is now available. As a demo, it will stop the joystick after 6 minutes, but if you own the current X-Plane CD-ROM v6.0 then it will upgrade that and remain fully flyable. Download

New Global Operations Movie
Another movie for Global Operations has been released, showing off the team-based tactical military shooter that's being beta tested at Barking Dog. This clip features a minute of action-packed footage from the Peru level. Download

New Screens: LO:MAC
Ubi Soft has released two new screens from Lock On: Modern Air Combat. These two shots eature an F-15C preparing to aerial refuel with a KC-10 tanker and an A-10 flying low over the foothills of the Caucuses.

Also, you may have noticed that the LO:MAC site was down last week. Apparently, Ubi Soft's provider experienced a severe mix up with the paperwork, and Lock On went down in the process. They now have the situation fully resolved.

Military News Dutch Back JSF For European Fighter Production
Subject to Parliamentary ratification, the Dutch Cabinet has plumped for the enormous potential of the F-35 Joint Strike Fighter (JSF) as the replacement for its 138 strong fleet of F-16s, a decision that holds considerable significance for its European competitors. Following Canada's decision last week to invest $150 million in the development of the JSF, the Netherlands is poised to throw its full weight behind the project to the tune of $800 million, split between the Government and Dutch industry which expects subcontracting promises of considerable value.

The decision represents a body blow for both the Eurofighter (EADS and BAE Systems) and Dassault's Rafale who were competing with Lockheed Martin's F-35 for the Dutch contract, worth approximately Euro 5.5 billion s ($4.8 billion). The contract has gone the way of the JSF despite the fact that it is at least eight years from production for the US and UK and even longer for other foreign purchasers. Prime Minister Wim Kok described the F-35 as "clearly the best candidate". 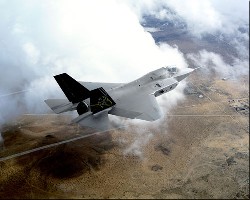 Originally a joint project between the US and the UK armed forces, the JSF team has been courting other nations since the programme began, and the Netherlands will be the first European country to jump on a bandwagon that is starting to gather pace. Norway, Italy, and Denmark are all considering whether to join the project.

All this enthusiasm for the F-35 is leaving the fighter's two European competitors somewhat in its jetwash, particularly with the lucrative South Korean contract seemingly going Stateside with Boeing, under significant US political pressure. French Foreign Affairs Minister Hubert Vdrine did make a cursory attempt last week to woo the Dutch vote the way of Dassault's Rafale, emphasising neighbourly support and relative technical strengths, but appears to have been unsuccessful. This leaves only 61 Rafale aircraft so far ordered by the French Air Force.

The waters of the European Aeronautic Industry are further muddied by split loyalties. Although Italian firm Finmeccanica is involved in the Eurofighter project, this may not be enough to stop the Italian Government from following the lead of the Netherlands. Likewise British firm BAE Systems is part of both the Eurofighter and JSF teams but it seems certain to give priority to the F-35 programme, which is likely to become the largest military production programme in history.

The US Government expects to purchase 3,000 F-35's over a 25 year period and the input from other countries will go towards the $26 billion needed for the development phase currently in progress. The UK is committed to investing $2 billion into this phase.

The rockets were launched from an MLRS M270 Improved Position Determining System (IPDS) launcher, and flew more than 35 kilometres to the target area dispensing their submunition payloads. Major test objectives included the successful launch of the rockets from the launcher, nominal motor performance, tail fin deployment and rotation, as well as navigation and telemetry performance.

"We continue to be pleased with the performance of this system and its potential for those who will use it," said Ron Abbott, vice president - Fire Support for Missiles and Fire Control. "Guided MLRS is a complex weapon system, but one that has exceeded our expectations, especially the guidance and control performance of the rocket. This is an extremely accurate rocket, as tests have repeatedly demonstrated."

The Guided MLRS rocket programme is an international cooperative programme between the United States, United Kingdom, Italy, France and Germany.

The Guided MLRS rocket incorporates a global positioning system (GPS)-aided inertial guidance package integrated on a product-improved rocket body. Additionally, small canards on the Guided rocket nose provide basic maneuverability and enhance the accuracy of the system. Guided MLRS initial operational capability is scheduled for 2005. The rocket will have a range of approximately 60+ kilometres.