Download Sites - a Sorry State of Affairs
The number of sites providing free downloads has been falling, placing more of a demand burden on the ones that remain. As of February 1, GameSpot announced it has shut down its public ftp servers and will now charge for downloads. What is the future of download sites? 3DGamers.com is feeling the bandwidth pinch, and is looking to organizations and institutions for help. To read more, click here.

World War II Online Free 14 Day Trial
Playnet.com, Cornered Rat Software and Strategy First announced that a 14 day free trial of their massively multiplayer online game, World War II Online is available for download through one of the web's leading download services, Gigex. Players can download the free trial version of the game and play for up to 14 days with all the game's features including operating tanks, field guns, aircraft, supply vehicles and boats or choose to play as a trooper- all with and against thousands of other players in the 3D world set in 1940 war-torn Europe. At the end of the 14 Day trial, players will be able to retain their characters by getting a full retail version of the game and activating their full subscription. To download the trial version from Gigex, click here.

Ubi Soft Sales Up
Ubi Soft Entertainment, one of the worlds top 10 videogame publishers, achieved consolidated sales of 146.4 million dollars (165.1 million euros)during the third quarter of the fiscal year 2001/2002. This represents an increase of 44.6% over the third quarter of the previous financial year. In addition, for the first nine months of the year, growth exceeded 54%.

Over the quarter running from October to December, Ubi Soft launched 57 new titles, compared with 48 during the same period in the previous year. The success of Tom Clancys Ghost Recon (430,000 copies sold), and IL2 Sturmovik, PC business represented 40% of sales for the quarter.

RADEON 8500 will get a boost as well -- it will now also feature 128 MB of DDR memory. RADEON 8500, capable of driving three displays simultaneously through VGA, DVI-I, and S-Video connectors, will maintain its suggested retail price of $299. Rounding out the mainstream segment in ATIs lineup is RADEON 7500, which is now offered at $149. Both RADEON 8500 with 128 MB RAM and RADEON 8500LE will be available in March. 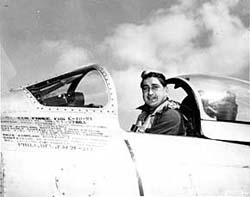 Gabreski led a series of fighter sweeps over the beaches of Normandy on June 6, 1944 -- D-Day, eventually surpassing Eddie Rickenbacker's World War I record. On July 5, 1944, he scored his 28th kill, making him America's leading ace. Later, he was held as a prisoner of war in Germany.

Funeral services will be held Feb. 6 at St. Matthews Church in Dix Hills, N.Y., on Long Island. The colonel will be buried at Calverton National Cemetery, Calverton, N.Y., also on Long Island.

Chile To Buy 10 F-16s
Officials of the government of Chile signed a letter of offer and acceptance (LOA) yesterday for 10 F-16C/D aircraft, according to Lockheed Martin Aeronautics Company. The LOA outlines a Foreign Military Sales agreement between the governments of Chile and the United States, with total value of about $500 million. A contract between the prime contractor Lockheed Martin and the US Air Force is expected later this year and will be worth approximately $400 million. The aircraft will be delivered between mid 2005 and mid 2006. 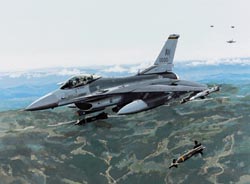 Henry Gomez, Lockheed Martin Aeronautics director for market development in the Americas region, described the F-16 as a high-technology fighter that will satisfy Chile's programme needs. "For Chile, the F-16 met or exceeded all the technical and operational requirements of the Chilean Air Force. The Chilean Air Force will benefit from the associated training opportunities and interoperability with the US Air Force. As a nation, Chile will also be able to benefit from the technology transfer by Lockheed Martin and the F-16 industrial team as a part of the associated industrial co-operation program," said Gomez

The mix of aircraft will be six single-seat F-16Cs and four two-seat F-16Ds. The aircraft is the latest version of the Block 50 F-16 and is powered by the General Electric F110-GE-129 engine, which is being procured under separate commercial arrangements. The F-16 is a candidate in the current F-X fighter competition in Brazil.

Speaking on ABC television's "This Week," Rumsfeld agreed with President Bush's characterization of Iran, Iraq and North Korea as "an axis of evil." He said the United States has solid proof that the three are engaged in developing chemical, nuclear, biological or radiological weapons.

"And we do know that those countries have relationships with terrorist networks," he said. "It's that nexus between weapons of mass destruction and terrorist networks that the president was citing as being different for today, and something that we really have to think very carefully about what we do as a people, and as a world, and as a society, given that nexus."

Rumsfeld backed up earlier statements he made that if terror networks get these weapons and attack America, then the casualty count could be tens of thousands or hundreds of thousands. He said the United States and the world cannot sit idly by with the danger "that eventually it's reasonable to expect that terrorist nations will provide weapons of mass destruction to terrorist networks."

He said President Bush will use his own judgment about Iran, Iraq and North Korea, "and he will watch and take the appropriate steps to provide for the protection of the American people, our deployed forces and our friends and allies."

Rumsfeld also said the Iranian government has let Al Qaeda terrorists escape over its border with Afghanistan. He acknowledged that border is porous, but noted Iran has not tried to seal it as has Pakistan with its equally porous border to the east.

Rumsfeld also addressed the problem of the Al Qaeda and Taliban detainees under U.S. control. He said everyone in the U.S. government agrees they are not prisoners of war.

He said even with this decision, the United States will continue to treat the detainees humanely as detailed in the Geneva Conventions. He said the only decision is whether this treatment should be done as a matter of law or of policy.

"A lot of people are quite concerned that we don't do anything that would blur the distinction between noncombatants and combatants," Rumsfeld said. "If you think about it, the reason the Geneva Convention is there is because we wanted to protect lawful combatants."