Featuring 18 highly detailed maps, including the most popular levels from the current, downloadable "Beta" version of the game, as well as several completely new and exclusive areas designed specifically for the retail release of the game. Mission locations have been created to look hyper-realistic and offer great variety, from the vast barren deserts of the Middle East to the deep snows of the Antarctic and from towering hydro-electric plants to crowded urban cityscapes of the United States.

Management Changes For SimHQ
Effective today, Pete Marone and Dan Crenshaw are stepping down as President and Vice-President of SimHQ.com and relinquishing ownership to Bubba Wolford. The reason given for today's decision is due to the strain of increased workload and financial responsibility required to maintain the site. [More...]

Soldier of Fortune II Delayed
Activision has delayed the launch of Soldier of Fortune II: Double Helix, its upcoming first-person shooter sequel, until later this spring, according to a company representative. The game was previously scheduled for release this winter, but it will now be held back in order to give the developer more time to balance the random mission generator and refine the multiplayer mode, which was added late in the game's development.

Haegemonia Site Launched
Cryo Interactive has opened a new Web site for Haegemonia, their upcoming space combat strategy game. The new site contains a general overview of the game's background story and gameplay features, along with a small gallery of screenshots. Haegemonia is set in a time when the populations of Earth and Mars are threatened by an invading alien force. The real-time strategy game features four different races and more than 40 different types of spaceships. Players will have to manage their fleet of ships, terraform and colonize planets, manage their resources, and research or steal new technology. The game is built on an advanced 3D engine, and it includes two different single-player campaigns, as well as cooperative and competitive multiplayer modes for up to eight players over Internet or LAN connections.

SuperPower Demo Available
Dreamcatcher has released the playable demo for SuperPower, its upcoming turn-based strategy game. The demo lets players control the US for up to 20 turns, and it does not include a save option. The full version of the game will let players lead a nation to worldwide dominance by directing the country's political, military, economic, and secret service organizations. It will also feature the largest military database ever assembled in a PC game, with every significant statistic published about 140 of the most important countries around the world and more than 4,000 different types of military units. Download

Military News United Defense Awarded Contract For M109a6 Paladin
United Defense has been awarded a $21.2 million contract modification by the U.S. Army's Tank-automotive and Armaments Command for the production of 18 M109A6 Paladin Self-Propelled Howitzers for the Army National Guard.

This contract calls for vehicle deliveries from June through September 2003. The Department of the Army has assigned these 18 howitzers to the 28th Infantry Division (Mechanized) of the Pennsylvania Army National Guard.

"This award was made possible through the use of reprogrammed funds from an international sale of older version howitzers, allowing the Paladin Enterprise to produce additional M109A6 Paladin systems toward meeting the Army National Guard's shortfalls. This is an important step in our continuing efforts to meet the Guard's critical need for modern self-propelled artillery," said Adam Zarfoss, United Defense's Paladin Program Director. "This award allows the Paladin team to retain a warm production base that positions United Defense and our production partners at Anniston Army Depot to continue to meet the Guard's needs."

The M109A6 Paladin provides increased performance, responsiveness and lethality to artillery crews. From the move, Paladin can receive a fire mission, compute firing data, select and take up firing positions, automatically unlock and point its cannon, fire, and then move again --providing "shoot and scoot" capability and protecting the crew from counterbattery fire.

Paladin fires the first round in less than 60 seconds, with a range up to 30km assisted. Paladin's enhanced capabilities further increase survivability because the crew remains in the vehicle throughout the mission. 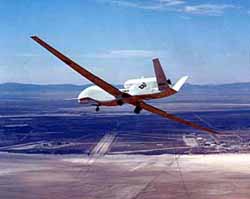 The contract covers the integration of worldwide operations capabilities, mission planning enhancements, logistics support and flight test activity. Work is expected to be completed by December 2003 and will be performed at Edwards Air Force Base and at company facilities in Palmdale and San Diego, Calif. The Aeronautical Systems Center, Wright-Patterson Air Force Base, Ohio, is the contracting activity.

TADIRCM Passes Major Test
The US Navy's Tactical Aircraft Directable Infrared Countermeasures (TADIRCM) system completed a final major, live fire, test in 2001, confirming that the technology is ready for the next stage of development. The programme is researching the feasibility of a deployable IR laser countermeasures capability aboard tactical aircraft.

The November 19, 2001, test was the first time that a modern infrared air-to-air missile launched at a tactical fighter has been defeated by an on-board laser-based directional infrared countermeasures system. The test was conducted at the US Naval Weapons Range at China Lake in California.

For the live fire test, the TADIRCM system was installed on a US Navy QF-4 drone flying at high speed over the China Lake range. The drone was pursued by two Air Force F-15 fighters, one of which was equipped with the infrared air-to-air missile. The F-15 locked onto the target drone and fired its missile. Aboard the drone, the two-colour missile warning system, using US Naval Research Laboratory developed algorithms, immediately detected the launch. Missile declaration and laser jamming by the BAE SYSTEMS "Agile Eye" IR countermeasures system occurred very rapidly, and drove the missile off course.

"The TADIRCM programme has demonstrated that this capability is ready for the next stage of development," said Captain Robert Boyd, Programme Executive Office, Tactical Air Programmes (PMA-272).

Kathy Lanier, BAE SYSTEMS programme manager said, "TADIRCM performed flawlessly. The system operated without a failure during an entire month of tests, and its performance in protecting the aircraft was outstanding." Lanier praised the system performance in previous surface-to-air and simulated tests earlier in the month as well, noting that the system detected every missile, and followed through by getting laser energy squarely on the target."

Extended Range TOW 2B Missile Tested
The US Army has successfully completed the initial testing of an extended range Tube-launched, Optically-tracked, Wire-guided (TOW) 2B missile.

The TOW missile system, historically limited to a maximum range of 3.75 kilometres, proved its ability to extend its range beyond four kilometres at the Army's Redstone Arsenal, in Huntsville, Alabama, last month. 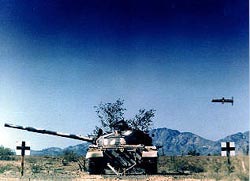 "This demonstration proved that the existing TOW missile propulsion system, coupled with minor airframe modifications, has the capability to deliver the TOW missile to extended ranges, with no decrease in terminal lethality," said Paul Walker, Raytheon Missile Systems, vice president, Land Combat product line. "The company is committed to the continued success and evolution of the TOW missile system," he added.

This TOW 2B extended range capability will be made available to current TOW 2B customers via the US Department of Defense's Foreign Military Sales office.