Regarding the stutter issue, this patch should greatly alleviate the problem. However, please be aware that if you attempt to run IL-2 at greater detail levels than your hardware is capable of, you will have performance degradation. In such a case, it is highly recommend lowering your detail levels and sound quality.

Mechwarrior 4 'Mech Paks Slated For 2002
Microsoft today announced that two new MechWarrior 4 'Mech Paks will be available in retail locations throughout North America this year. The Paks will expand the gameplay for MechWarrior 4: Vengeance. Each Pak will give players new 'Mechs, a new electronics package, a new weapon, and a multiplayer map. Cyberlore, the team behind the successful MechWarrior 4: Black Knight expansion, is developing the Paks in conjunction with the FASA MechWarrior 4 team. One Pak will contain new Inner Sphere content; the other will build up the Clan arsenal. MechWarrior 4: Inner Sphere Mech Pak will be released this spring and will include:

MiGMan's Flight Sim Museum Turns Pay Site
As of January 2002 the MiGMan's, Flight Sim Museum, moves to a subscription basis. MiGMan told COMBATSIM, "the switch to a subscription site was a necessary part of my plans for the Museum's future, which involve providing even better service to the Flight Sim community and industry both on the web and in related real world activities". There will remain a significant amount of free content on the site..

Military News US Army Testing Air-Mobile Command Systems
Commanders at two US Army divisions are testing a system that tracks the battle digitally while the tactical operations centre (TOC) is being torn down and moved to another location.

The Army Airborne Command and Control System, known as A2C2S, is a centralised work area with five laptop workstations and a centralised communications flat panel display that supports corps echelons or higher. The workstations, which are housed in of a UH-60 Black Hawk, support intelligence, fire support, logistics and communication functions.

There are currently two systems that are being used as demonstrator models. They were delivered to the 4th Infantry Division at Fort Hood, Texas, in July and the 101st Airborne Division, Fort Campbell, Ky., in December. The demonstrator models were put in the field to get early feedback, officials said. Other systems won't be fielded until January 2003, however, when three models will be sent to the 4th ID, said Maj. Tony Potts, the A2C2S assistant product manager. 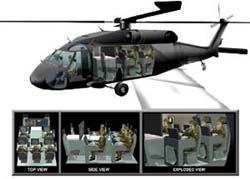 The 4th ID is the Army's first digitised division, which means the division will be equipped with technology that generates, stores and processes data. The first time the division used the A2C2S system was during its Division Capstone Exercise II.

"The system gives the commander flexibility to command and control from an aerial platform, and allows him to manoeuvre around the battlefield and reposition quickly," said Lt. Col. Michael Senters, the executive officer for 4th Brigade, 4th ID.

The whole Army will benefit from this system, Potts said, but especially the field commanders and their battle staff. Commanders will no longer lose those 30 minutes of situational awareness en route to another location, Potts said. The commander just transfers the battle to an airborne TOC. As updates come in he's able to transmit new orders or directives as events take place, Potts said.

"Commanders using the system don't have to wait until they get to the next location, wait until the TOC gets set up, see the changes that have taken place and then make decisions," Potts said.

It also allows commanders the option to get closer to the battlefield, Potts said. The human element of command should never be lost, Potts said, and soldiers need to see their commanders up front.

Another key function of the system is cross training is not needed for battle staff members. The battlefield software used in the TOC will work exactly the same in the A2C2S.

While the A2C2S is the part of a plan to digitise Fort Hood, a second system was given to the 101st Airborne Division so that the Army can monitor how other units can benefit from the system.

"Digitisation is where we're working to get, but we still have a few years to get there. We're going to have a lot of these in the field, some of which will either go to partially digitised divisions or maybe non-digitised divisions," Potts said.

Digitising Fort Hood is an ongoing process, Senters said, with Hood's 1st Cavalry Division and III Corps Artillery next on the list.

The capabilities of the Airborne TOC have also been put into a humvee, and labelled as a ground communications system. The ground system, however, is part of a homeland defence initiative and has not yet been funded.

"The ground system is what we call a horizontal technology integration," Potts said. "We transferred the technology from our aircraft to a humvee to show that we can use five workstations to form a battalion TOC, instead of four armoured vehicles."

If the $27.5 million funding for the homeland defence initiative is approved, Potts said the plan is to build systems for six aircraft and three humvees.