Gray Matter is an L.A.-based game developer founded by the top designers formerly from Xatrix Entertainment, developer of Redneck Rampage and Kingpin. The company has proprietary technologies that can be used to create first-person action games. Industry veteran Drew Markham has signed a long-term employment contract with Activision and will continue to manage Gray Matter studios. Additionally, key employees also have signed long-term employment contracts with Activision.

Under the terms of the agreement, Gray Matter will become a wholly owned subsidiary of Activision. Activision issued 133,690 shares of common stock in connection with the acquisition.

Comanche 4 Patch
There is a new patch for Comanche 4,version 1.0.1.13. The 6.25 MB download includes a variety of changes since the previous public version 1.0.1.2, including a new LanClient, multiplayer fixes, NovaWorld changes and more. This patch is also available through the game's auto-updater. Download

New Medal of Honor Video
EA's newest Medal of Honor: Allied Assault video. Your Springfield '03 Sniper Rifle not doing the trick? No need to worry, grab a tank to mow down your enemies! Click here

The Air Force initiated flight-testing on the F-16 with two missions at Edwards Air Force Base, Calif., Dec. 6 and 7. Those focused on the system's air-to-air and air-to-ground operation.

The JHMCS displays flight information on the inside of helmet visors, keeping that data in sight at all times. It also allows aiming or deploying sensors and air-to-air or air-to-ground weapons with little more effort than looking at a target and pressing a switch.

In addition to being the JHMCS prime contractor, Boeing integrates the system on its F-15 and F/A-18. Vision Systems International is the principal subcontractor and supplier of JHMCS system components. A joint program office at Wright-Patterson Air Force Base, Ohio, manages the JHMCS program.

JHMCS flight-testing on the F-15 and F/A-18 is to be completed by March.

Each of the new submarines will be fitted with dual enhanced NATO Ship's Inertial Navigation Systems based on Sperry's ring laser gyro (RLG) systems technology. Equipment deliveries under the $5.8 million contract are scheduled to begin in late 2002 and will be completed in 2004.

The first of the new 7,200-ton, 318-ft. Astute-class nuclear attack submarines will be launched in 2004. The Ministry of Defence has ordered six of these submarines, which will replace the existing Swiftsure-class and early Trafalgar-class boats. A follow-on contract for the remainder of the Astute-class platforms is expected in 2002.

ATK Conducts Successful Test Firing Of OICW Ammunition
ATK (Alliant Techsystems) has completed a series of test firings of the US Army's Objective Individual Combat Weapon (OICW) that included the system's 20-millimeter high-explosive ammunition with an advanced air-burst fuze. During the test firings, which were conducted at ATK's test range near Minneapolis, more than 60 air-burst rounds were fired successfully.

"The accuracy of the air-bursting projectiles far exceeded customer expectations," said Randy Strobush, OICW programme director, ATK Integrated Defense Company. "We tested at ranges out to 500 meters and the OICW consistently delivered airbursts within a very tight pattern. Performance was well within the specifications for ammunition accuracy."

ATK Integrated Defense Company is developing the OICW, designed to be the US Army's next-generation infantry rifle, under a $105 million contract from the US Army Armament Research, Development, and Engineering Centre (ARDEC). The company's work on the programme includes system integration of the gun, fire control, ammunition, logistics, and training.

In December, ATK conducted a series of successful test firings of an independently developed 30-millimeter ammunition round with an advanced air-burst fuze that combines timing fuze technology with turn-count technology similar to that employed in the OICW fuze.

U.S. Using Intel to Foil Terror Attacks
The U.S. intelligence effort in Afghanistan will pay off in thwarting attacks on the United States, its allies and friends, Defense Secretary Donald Rumsfeld said Jan. 11.

He also said that while the Taliban have been driven from power, the campaign in Afghanistan is far from over. He said many parts of the country are still in turmoil and that senior Al Qaeda and Taliban officials are still at large. Coalition and Afghan forces also need to deal with pockets of Al Qaeda and Taliban fighters.

While the United States remains committed to bringing Al Qaeda leader Osama bin Laden and Taliban chief Mohammad Omar to justice, an equal goal is to "stop terrorist networks from being able to continue to threaten the United States, or friends and allies," Rumsfeld said.

To this end, accessing and assessing all intelligence sites is crucial to stopping terrorist acts. The secretary explained that American forces are examining suspected weapons of mass destruction sites, Taliban and Al Qaeda safe houses, and information and material obtained by interrogating detainees.

"It is from these activities that we will most likely gain information that will help us prevent future attacks," Rumsfeld said.

Rumsfeld said he is "reasonably sure there are" other countries in which terrorists have been arrested.

Rumsfeld said detainees have told coalition officials that at least two senior Taliban officials were killed in bombing raids in Afghanistan during December. The two men were in the "top 20" of the Taliban regime.

The first group of Al Qaeda and Taliban detainees arrived at the U.S. Navy Base at Guantanamo Bay, Cuba, today. The group of 20 detainees arrived under heavy guard aboard a C- 17. Rumsfeld said the United States will treat the detainees in "a manner that is consistent" with the Geneva Conventions.

Chairman of the Joint Chiefs of Staff Air Force Gen. Richard Myers said nine U.S. fighters and bombers struck targets in the Zawar Kili area with 44 precision weapons. U.S. forces operating in the area called in the strikes, Myers said. "This was the sixth strike in that area. There are over 60 aboveground structures. There are over 50 caves, some of which have been closed, some of which have been exploited. (Coalition forces in the area) are finding lots and lots of military equipment and other items that will lead us down the paths we want to go," Myers said.

Stufflebeem said strikes over the weekend leveled the remaining buildings at the site and sealed all the caves. Coalition forces wanted to ensure Al Qaeda or Taliban could not reuse facilities at the complex. 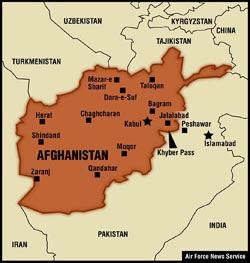 Pentagon spokeswoman Torie Clarke said coalition forces will now move into other areas in the search for Al Qaeda and Taliban leaders and fighters.

The Zawar Kili area had more than 60 buildings and 50 caves, Stufflebeem said. "It was obvious once we got special operating forces on the ground to be able to look at this complex that this had at one time been a significant Al Qaeda facility," he said.

The facility was a training area, logistics point, and command and control node for Al Qaeda. Coalition forces had been systematically inspecting these facilities and then calling in air strikes. "This should conclude most of what's happening in this area for now," Stufflebeem said.

But Zawar Kili is not a unique area in Afghanistan, the admiral said. "This entire part of the country is riddled with hillsides and valleys with caves and aboveground structures," he said. "So  we'll continue to look for where Al Qaeda forces are, where pro-Taliban forces are, and the facilities that they have used in the past." When coalition forces spot these targets, they will attack them.

More detainees will join the 20 already at the U.S. Navy Base in Guantanamo Bay, Cuba, Clarke said. She said members of Joint Task Force-160 at the base are treating the detainees humanely and in accordance with the Geneva Convention. The detainees are receiving "culturally appropriate" meals; they may shower each day; they receive medical care; and they can exercise once a day. Members of the International Committee of the Red Cross will visit the detainees in the next few days, Clarke said.

She said the detainees "are incredibly dangerous. (The detainees) are willing to blow themselves up or do anything possible to hurt and kill others. All the appropriate security precautions are being taken considering what you are dealing with."