PC News JackedIn Looking To Acquire B-17 2 Source Code
COMBATSIM has learned that JackedIn.com has been negotiating with Infogrames to acquire the B-17 2 source code. According to CEO of JackedIN, Robert Salinas, they are prepared to take on B-17 2, however, JackIn does not have the money Infogrames is asking for. To raise the money, JackedIn has turned to the community for financial contributions. For more information, click here.

Airport 2000 Vol3 Patch For FS2002
Wilco Publishing has released an update for Airport 2000 Volume 3 that makes the popular scenery add-on compatible with Microsoft Flight Simulator 2002. The free FS2002 patch for Airport 2000 Volume 3 gives simmers the ability to include the volumes seven precisely recreated airports San Francisco International, Denver International, Seattle Tacoma, Paris Orly, Kastrup Copenhagen, Berlin Tegel and London Gatwick in their virtual FS2002 takeoffs and landings. The satellite terminals, hangars, office and maintenance buildings, radar towers, gate numbering system and other airport features are replicas of the real thing, based on actual visits and photographs. The upgrade also adds several new features supported by FS2002, including FMC vertical speed and ground illumination by aircraft headlights. All other features from Airport 2000 Volume 3 operate with the patch except for the flight adventures, which are not currently compatible with FS2002. Click here

Military News Raytheon to Sell AIS To L3 Communications
Raytheon Company will sell its aircraft modification and integration business to L-3 Communications for $1.13 billion in cash. The companies expect to finalize the sale by the end of the first quarter 2002, following government approval.

Aircraft Integration Systems (AIS) provides aircraft modification, systems integration, and maintenance services to U.S. and global customers. It has modified more than 15,000 aircraft of more than 125 types. Under the agreement, Raytheon will retain the UK Ministry of Defence ASTOR (Airborne Standoff Radar) program, certain receivables and the Boeing Business Jet program, which is nearing completion. Annualized revenue of the business being sold was approximately $900 million in 2001.

"The sale of AIS represents a major step in our strategy to focus on growth in key areas such as missile defense; intelligence, surveillance and reconnaissance (ISR) electronics; precision strike weapon systems, and homeland defense," said Daniel P. Burnham, Raytheon's chairman and chief executive officer. "This transaction provides us financial flexibility and the strategic resources to dedicate to these markets."

Raytheon will continue as the lead integrator on the $1.3 billion ASTOR program, which the company was awarded in 1999. ASTOR is an advanced airborne radar surveillance system that provides day/night and all-weather imagery of the ground over a large area. The imagery can be analyzed on board the aircraft and passed in real-time to ground stations and other military systems. Raytheon will retain its strength in ISR, with capabilities in imagery, communications, electronics (radar and data links); mission planning and management; and signal and image processing.

Lithuania, Jordan To Buy Javelin Anti-Tank Weapon System
The US Army has signed two Letters of Agreement (LOA) paving the way for the sale of the Javelin anti- tank weapon system to international customers in Europe and the Middle East, according to the Raytheon-Lockheed Martin Javelin Joint Venture.

The agreement with the government of Lithuania represents the first European sale of Javelin. It is expected to result in an award to the Joint Venture of $10 million.

Jordan became the first Middle East customer for Javelin on Dec. 26 when representatives of the US Army and Jordan signed the LOA at a ceremony in Amman. It is expected to lead to a $12 million contract for the Joint Venture, and it may pave the way for additional Javelin foreign military sales in the region. 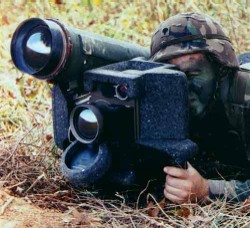 The Javelin medium-range, anti-tank missile system is a one-man transportable and employable fire-and-forget anti-armour missile system. Javelin is approved for international sales through the US Army's Foreign Military Sales system.

Javelin's infrared seeker is resistant to countermeasures and battlefield obscurants and is also safe to fire from enclosures. It can be fired three times in less than 90 seconds.