Mechwarrior 4 Expansion Now Available
Microsoft today announced that the multiplayer trial version of MechWarrior 4: Black Knight Expansion is now available from the game's official site. The multiplayer trial version allows players to try out the Absolute Attrition and 'Mech Strongholds modes on a volcanic map. BattleMechs available in the demo include the Bushwacker, the Mad Cat Mark II, the enormous Atlas, and the brand-new Ryoken and Sunder models. MechWarrior 4: Black Knight Expansion pack introduces five new Mechs for the player to pilot: the Ryoken, Sunder, Uller, Wolfhound and Black Knight. It also includes several new vehicles, such as the Demolisher II Heavy Tank and the Nightwind Attack Helicopter; and new weapons, like the incredibly devastating Cluster Bombs.

Exclusive Soldier of Fortune II Footage
GameSpot has an exclusive video clip from Soldier of Fortune II: Double Helix, Activision's upcoming first-person shooter in development at Raven Software. The brief video, which may be inappropriate for some viewers, shows off the new dismemberment zones that will be featured in the game. Viewer discretion is advised. Click here 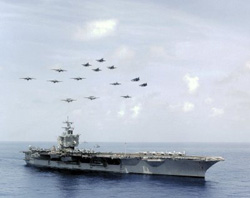 ENTERPRISE was launched at Northrop Grumman Newport News in 1960 and was the first nuclear-powered aircraft carrier to join the U.S. Navy's fleet. The ship and its battlegroup were most recently deployed in the Middle East as part of Operation Enduring Freedom. ENTERPRISE is 1,101 feet 2 inches with a flight deck width of 252 feet and a displacement of 89,600 tons. It can travel in excess of 30 knots.

Rumsfeld: U.S. to Keep Nuclear Test Moratorium for Now
WASHINGTON (Reuters) - Defense Secretary Donald Rumsfeld on Tuesday reasserted the U.S. commitment to a nuclear testing moratorium as the Pentagon prepared to send Congress proposals for a major overhaul of the nation's nuclear policy. But Rumsfeld, speaking to reporters as the Nuclear Policy Review was scheduled to go to Congress later in the day, left open the possibility that controversial underground testing might be needed in the future to keep a shrinking U.S. arsenal of thousands of devastating warheads "safe and reliable." [More...]

Officials were concerned that Al Qaeda terrorists were using the complex to regroup. "It is an Al Qaeda training facility, storage facility and a command facility," Joint Staff spokesman Rear Adm. John Stufflebeem said. "The strike was prompted by the intelligence that there was a lot of stuff there."

U.S. Central Command officials said the strikes hit armored personnel carriers, other tracked vehicles, supplies and munitions. Stufflebeem said the camp consists of one area above ground and two cave complexes. The strikes have leveled the buildings and sealed many of the caves.

"Al Qaeda is widely dispersed," Stufflebeem said. "They are attempting to regroup so they can amass for leadership and mischief purposes. The numbers are small and they are trying to find each other so they can continue their war."

Paktia is on the border with Pakistan. The province is just south of the Tora Bora cave and tunnel complex. Stufflebeem said the area had previously been a haven for Al Qaeda and the Taliban and that Al Qaeda and Taliban still occupy the area.

"We're continuing to find them and we're continuing to strike their equipment as we find it," he said during a press conference. "When you find tanks, it's pretty easy to determine that they are not ours, and they are clear targets."

He said instead of "chasing shadows," DoD would cast a regional and worldwide net to capture Taliban and Al Qaeda leaders. "We will stop speculating openly about where they may be, as we build an intelligence picture that will allow us to have the 'sanctuary' to be able to move when the time is right without giving anything away," he said.

Stufflebeem said the air campaign is going well. Typically, U.S. and coalition aircraft are flying "a bit more than 100" sorties per day. They are primarily flying close air support or on-call interdiction missions called in by Special Forces with anti-Taliban forces.