Awards will be given in the following categories:

Fifth US Army Apache Longbow Battalion Certified Combat Ready
The U.S. Army has certified as combat-ready its fifth AH-64D Apache Longbow helicopter battalion. The unit is equipped with 18 of the world's most lethal and versatile attack helicopters, which Boeing builds here.

The Army's 1st Attack Helicopter Battalion, 101st Aviation Regiment, received its certification Dec. 6 during ceremonies at Fort Hood, Texas, after having completed an accelerated six months of intensive training there. The unit has since returned to its home station at Fort Campbell, Ky. 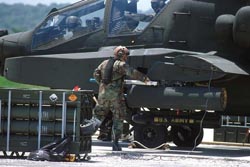 To qualify, the men and women of the battalion completed a series of comprehensive classroom, flight and field exercises. Members of the unit underwent a rigorous field examination, which included two live-fire exercises, and logged approximately 3,000 flight hours during the training program.

The Army is modernizing its fleet of AH-64A Apaches into next-generation Apache Longbow helicopters, which link a wide range of avionics, electronics and weapons into an advanced integrated weapon system. Boeing is under contract with the Army to remanufacture 501 AH-64As into AH-64D Apache Longbows.

This contract is the beginning of a more than $1 billion development effort to deliver unprecedented early warning and battle management capabilities by the end of this decade and is expected to lead to a multibillion-dollar program for production of this next-generation Advanced Hawkeye.

The RMP Pre-SD&D effort will advance the design of the E-2C mission system, which has been researched by Integrated Systems over the past several years. Under the 12-month Pre-SD&D contract, Integrated Systems will define the physical architecture of the next-generation E-2C mission system, produce the preliminary weapon system specification and provide associated program plans. 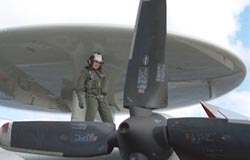 "Our military is transforming itself for the new world environment," said Philip A. Teel, AEW & EW Systems vice president for Northrop Grumman Integrated Systems. "Real-time information will be one of the war fighters' primary tools and networks will be the major force multiplier. The Navy's primary airborne node in its future network-centric structure will be the Advanced Hawkeye which results from this Radar Modernization Program."

The development program will integrate a number of new capabilities into the aircraft's new airborne early warning and control system. The Hawkeye 2000 radar system now in production will be replaced with a new, solid-state, electronically steered UHF radar.

This next-generation Hawkeye will also have theater missile defense capabilities. Other improvements will include a tactical cockpit giving the co-pilot the capability to function as a fourth mission system operator; a new communications suite; new generators; improved identification friend or foe system; and an updated mission computer and software.

The development program will also target reducing production and operations and support costs. The full SD&D program contract is expected to be awarded at the end of next year.

The new order is in addition to a $9 million Navy contract received in early 2001, as well as previous contract modifications to accelerate production and increase the number of kits. Production will begin immediately. 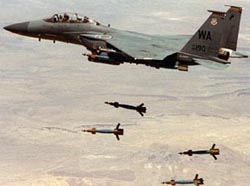 "When we were awarded the contract early in 2001, it was the first time since the inception of the Paveway II programme that a second supplier was chosen to make laser guidance kits," said Dr. Dennis Beres, general manager of the Archbald facility.

Each guidance kit consists of a Computer Control Group (CCG), which is the front-end guidance system, plus an Air Foil Group (AFG), which includes the flight stability fins on the back of the Paveway II kit. The kits significantly improve the accuracy of gravity weapons - often referred to as "dumb bombs" - thereby reducing collateral damage and risks to US and allied ground forces.

Since 1990, Lockheed Martin has delivered to the US Navy and customers in seven countries over 16,000 laser guided training rounds, which are used to train aircrews in place of more expensive laser guided bombs. The Paveway guidance kits built and tested by Lockheed Martin draw on key technologies and components from the training rounds but meet more stringent live-weapon and aircraft interface specifications.