PC News ProSIM Offering Cash For Best BCT Scenarios
Have you been building scenarios for BCT: Brigade Combat Team in obscurity? Want to share your creations with the world? Submit your scenarios to ProSIM Company. You could win $50!

ProSIM is collecting submissions from BCT players for BCT Commander, our next commercial release. After we have collected all of the entries, our panel of judges will select the top twelve entries. These individuals will receive a $50 cash reward and have their names published on the ProSIM website. There submissions will also be featured in BCT Commander, due for release February 2002. This contest will only be open for a limited time. To enter, go to ProSIM

Red Ace Squadron, a follow-up to the highly successful Master Of The Skies: The Red Ace, is an arcade-style flight combat game set in World War I. Using simple-to-learn controls, players can take a variety of real WWI bi-planes through a series of single-player campaigns, fighting for both Allied and German forces. But the most exciting feature of this new version is the multiplayer mode, which The Demo Version of Red Ace Squadron is available to download from the Small Rockets site.

Military News Navy Area Missile Defense Program Canceled
Edward C. "Pete" Aldridge, under secretary of Defense for Acquisition, Technology and Logistics, announced today the Navy Area Missile Defense Program has been cancelled due to poor performance and projected future costs and schedules. The cancellation will result in a work stoppage at some contractor and governmental field activities.

In the case of the Navy Area Missile Defense Program, the program acquisition unit cost and average procurement unit cost exceeded 57 percent and 65 percent, respectively. The Department has decided not to certify the program as currently configured.

"It's unfortunate we've reached this point," said Aldridge, "but certification was impossible. We are still in pursuit of a sea-based terminal phase capability as part of the overall missile defense strategy, but we must now move forward from here."

New Munitions Dispenser Greatly Improves Accuracy
For the first time in combat, US aircraft are dropping cluster bombs contained in wind corrected munitions dispensers (WCMD) against Taliban forces in Afghanistan with what US Air Force officials said are devastating effects.

A WCMD is a tail kit that is attached to a tactical munitions dispenser, which contains cluster bombs. The cluster bombs are dispersed as the TMD glides over a target.

Before introducing WCMDs to the Air Force inventory in April, TMDs were unguided. They often missed the intended target because of pilot error or strong winds, especially when launched from mid to high altitudes, said Col. Ken Merchant, director of Eglin's Area Attack System Programme Office. The weapons typically needed to be dropped from low altitudes to be accurate. 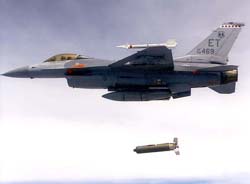 Air Force combat crews during Operation Desert Storm were exposed to extremely heavy surface-to-air missile and anti-aircraft artillery fire when flying low over Iraqi targets, Merchant said. They had to drop their weapons from mid to high altitudes to enhance their chances of survival.

When dropped from high altitudes, the strong desert winds made it difficult to achieve accuracy, Merchant said. The targets were often obscured by sandstorms or smoke from oil fires. So, Air Force officials turned to the Air Armament Centre here to find a solution.

Merchant's system programme office experts began a programme to develop a guidance kit for cluster munitions in 1996. Pentagon officials estimated it would take 10 to 12 years to get the guidance kit developed at a cost of $40,000 per kit.

Eglin's experts delivered the WCMD to combat aircrews in half that time at a cost of $10,000 per kit, Merchant said. It also exceeded all accuracy and performance requirements.

A WCMD can be used on three major weapon systems: the sensor fuzed weapon, the combined effects munition, and the gator aerial mine system.

The SFW contains 40 submunitions and is primarily used against massed armour. The B-1B Lancer can carry 30 SFWs, which gives it the potential of attacking 1,200 targets in a single pass.

The CEM contains 202 bomblets that scatter over a wide area. These are a mixture of incendiary, anti-personnel, and anti-armour submunitions.

The gator TMD scatters a large number of small mines over a large area. The mines can be programmed to self-destruct at a pre-programmed time to prevent needless injuries after their combat usefulness has passed.

TheTopowl HMS/D is already operational on the Tiger and Rooivalk helicopters. With this latest contract signed on December 12th, armed forces from seven countries (France, Italy, Germany, Norway, Finland, Australia, South Africa) have now chosen the Thales Avionics Topowl. The current programmes will lead to a production of more than 1000 Topowl.

Images are presented on a binocular, fully overlapped large field of view of 40ø. Unlike the formerly used Night Vision Goggles (NVG) the visor projection reduces the tunnel effect and provides an excellent peripheral vision with a good and natural view of the cockpit instruments.

This visor projection improves flying over luminous urban areas and ship landings allowing the pilot to see through the intensified image. 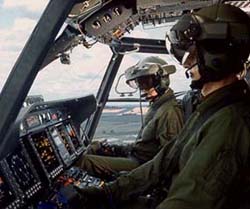 The display of the symbology on the large field of view leaves the strategic central area of the image free of visual obstruction.

These characteristics contribute to the reduction of the crew workload and to the safety of the flight. Crew comfort is also enhanced by the lightweight, well-balanced headgear and customised helmet.

General Dynamics Awarded MK19 Weapon Systems Contract
General Dynamics Armament Systems, a business unit of General Dynamics , has been awarded a $13.7 million, firm-fixed price contract option by the U.S. Army, Tank-Automotive Command in Rock Island, Illinois, for production of 880 MK19 40mm grenade machine guns. The original contract was awarded in June 2001; this option award raises the contract value to date to $27.2 million. Deliveries under this order will take place from October 2002 through July 2003. The MK19s will be produced at the General Dynamics facility in Saco, Maine.

General Dynamics has produced more than 25,000 MK19 systems for the U.S. Government and other customers since 1986. Firing M430 High Explosive Dual Purpose grenades, the MK19 enhances the normal infantry firepower, which consists of rifles, mortars and crew-served machine guns, by providing lethal firepower against lightly armored vehicles and dismounted infantry.