Matrix Releases Five Games
Matrix has released five new games that span from Napoleons glittering armies to deadly combat above far-flung worlds. "We wanted to give gamers a choice," says David Heath, Director of Operations for Matrix. "From hard-core wargamers to space strategy enthusiasts, there is something here for everyone."

The quintet of new games includes:

La Grande Armee at Austerlitz. The first in a series of Napoleonic designs, Austerlitz uses a no-hexagon map and 3-D views to capture the thunder and glory of Napoleons greatest victory. Scheduled for release December 19.

Starships Unlimited: Divided Galaxies. Take command of a stellar empire in this exciting game that combines the flow of pausable real-time simulations with the detailed control of turn-based games. Scheduled for release December 19.

Fortress Europe. Command the Allies armies storming Hitlers Atlantic Wall in this real-time game of the Normandy campaign. Not an RTS, Fortress Europe has the detail that wargamers love and the simplicity that makes it a perfect choice for those new to computer wargaming. Scheduled for release December 19.

Lost Victories. A mega campaign module for Matrixs popular Steel Panthers: World at War tactical armor game, Lost Victories puts players in the commanders seat as they lead the German panzers in their invasion of the Ukraine. Scheduled for release December 28.

Operation Watchtower: Guadalcanal 1942. Another mega campaign module for Steel Panthers: World at War. Lead a hard-bitten rifle company of the 1st Marine Division as it fights to seize Guadalcanal from its tough Japanese defenders. Scheduled for release December 28.

AMD Makes Major Strides In Commercial And Consumer PC Markets
AMD today announced it has posted impressive year over year market share gains based on shipments for both the commercial and consumer markets worldwide, according to the Gartner Dataquest quarterly report for the third quarter of 2001. Most significantly, AMD gained ground in the U.S. commercial sector, securing 40 percent of the small business PC market in the third quarter. Additionally, AMD processors accounted for more than half of all processors shipped to the Japanese home desktop PC market, as AMD captured 54 percent share, up from 24 percent one year ago. And in Western Europe, AMD grabbed 49 percent market share of processor shipments targeted for the home desktop PC market, an increase from 25 percent one year ago. All figures reflect Windows®-based desktop market segments.

Military News New Aegis Destroyer To Be Christened Mustin
One of the nation's most prestigious naval families will be honored Dec. 15, 2001, when the U.S. Navy's newest Aegis guided missile destroyer is christened at Northrop Grumman Corporation's (Ingalls Operations here. The new ship, the DDG 89, will be launched Dec. 12 and later officially christened "MUSTIN" in recognition of a family that has devoted nearly a century of Navy service to America.

MUSTIN (DDG 89) is the 39th ship in the ARLEIGH BURKE (DDG 51) Class of Aegis-guided missile destroyers, the Navy's most powerful destroyer fleet. These highly-capable, multimission ships can conduct a variety of operations, from peacetime presence and crisis management to sea control and power projection. 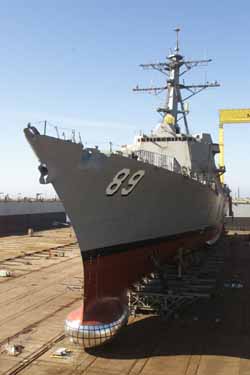 DDG 89 is the 18th Aegis destroyer to be launched and christened of 25 ships under contract or option to Ingalls Operations. Ingalls' first 15 Aegis destroyers have been delivered to the Navy. Two additional ships now in production at Ingalls will precede DDG 89 into the fleet.

The mission of MUSTIN will be to conduct sustained combat operations at sea, providing primary protection for the Navy's aircraft carriers and battle groups, as well as essential escort to Navy and Marine Corps amphibious forces and auxiliary ships, and independent operations as necessary. DDG 89 will be capable of fighting air, surface and subsurface battles simultaneously. The ship contains myriad offensive and defensive weapons designed to support maritime defense needs well into the 21st century.

MUSTIN (DDG 89) will honor the Mustin family, which has recorded a rich and honorable tradition of naval service. This tradition is marked by officers who were extraordinarily creative innovators. The Mustins' legacy to the Navy service lasted from 1896 until 1989, nearly one century of naval history.

Capt. Henry C. Mustin, U.S. Navy, (1874-1923), a 1896 graduate of the U.S. Naval Academy, earned a commendation for distinguished service in the capture of Vigan, Philippines, in 1899; flew the first aircraft ever catapulted from a ship; flew the first operational missions of naval aircraft during the Veracruz operation in 1914; and was the first commander of Aircraft Squadrons, Battle Fleet.

His son, Vice Adm. Lloyd Mustin, (1911-1999), a 1932 graduate of the U.S. Naval Academy, took part in developing the Navy's first lead-computing anti-aircraft gun sight, which proved of major importance in the air-sea actions of World War II, and served on the cruiser USS ATLANTA (CL 51) during the naval battle of Guadalcanal. His postwar service included commands at sea and development and evaluation of weapon systems. He later served as director of operations for the Joint Chiefs of Staff.

BAE SYSTEMS Completes First ADF Rapier Upgrade
BAE SYSTEMS has completed the refurbishment of the first of 20 Rapier ground-based air defence missile systems for the Australian Army. The delivery of the refurbished system is the first contract milestone and completes the pilot programme for the LAND 140 project.

The refurbishment was done by the company's Australian Product Support Group and will extend the life of the Rapier system for the Australian Defence Force (ADF). This will allow the ADF to maintain this important air defence capability, at an improved performance standard, while it considers a future air defence system, planned under JP117. 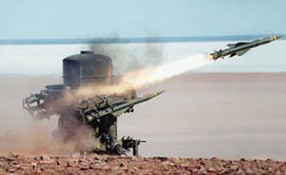 The refurbished Rapier system will provide improved supportability and operability for the life of the equipment in Australian service. The project has a through-life support element to 2006 with the first eight systems due into service in mid-2002.

"The refurbishment is a sensible upgrade for Australia that brings the system to a standard (B1M) equivalent to key user customers around the world," said Mike Brownhill, Operations Director, BAE SYSTEMS Customer Solutions and Support.

BAE SYSTEMS has supported the Rapier System for more than 20 years. It has worked closely with Matra BAe Dynamics, the Rapier design authority, and the Australian Army on a guided weapons strategy that led to the development of LAND 140.

ATK To Continue Production Of Sparrow Missile Rocket Motors
ATK (Alliant Techsystems) has been awarded a $16 million contract option by the US Navy for the procurement of 968 rocket motors for the Sparrow tactical missile. Of the 968 motors, 266 are for air-to-air missions and 702 are for surface-to-air missions.

The Sparrow is a medium-range, radar-guided, aerial-intercept missile with a high-explosive warhead that flies at supersonic speeds. It can attack high-performance aircraft and missiles from any direction.

The new motors are being procured under the Foreign Military Sales (FMS) programme and will satisfy individual country requirements as well as NATO requirements. Countries procuring the Sparrow missile include the US and NATO allies. Production is expected to continue through December 2003.

ATK Tactical Systems Company began production of the dual-thrust solid-propulsion rocket motor for the Sparrow missile in 1969 at its manufacturing facility located at the Allegany Ballistic Laboratory in Rocket Centre. The motors contain separate boost and sustain propellants in a side-by-side configuration to propel the missile to its target. The company has produced and delivered over 33,000 motors in a number of configurations to meet the increased capabilities of the Sparrow over the years.

The system generates simulated radar threat emissions and can emulate any known friendly or enemy radar system. Developed as part of AUTEC's Improvement and Modernization Program, the ESM TGS can emulate up to 64 threat radar modes dynamically. The system is also completely reprogrammable, a key distinguishing feature.

"The ESM TGS system represents a major enhancement to the Navy range's ESM test and evaluation capability, particularly for advanced receivers located on ships, helicopters, aircraft and submarines," said Dr. Edward Eberl, president of Amherst Systems. "Our system meets or exceeds all requirements associated with the ESM TGS installation, including delivery ahead of schedule."

The flight was the first subsonic free flight test of the MALI using a new processor, the AIMS-II computer system that includes a low-cost communications data link for off-board guidance, as well as a built-in inertial measurement unit. The Hamilton Sundstrand TJ-50 Engine powered the subsonic version of the MALI vehicle in Tuesday's flight.

The next flight test scheduled for early next year will integrate all major components of the MALI system including the MALI supersonic airframe and Hamilton Sundstrand TJ-50M, and the AIMS II computer system. The TJ-50M engine will enable supersonic flight of the MALI, while the AIMS II will facilitate uplink of off-board target data, flight control of the vehicle, and telemetry of flight test data.

Two subsonic MALI flight tests were conducted in November, also at China Lake. Both flights were flown on a BAE-operated F-4 aircraft for approximately one hour and flew the missile up to altitudes of 18,000 feet and Mach 0.9. Northrop Grumman's effort on the MALI program is led by Integrated Systems' Air Combat Systems business area at its Unmanned Systems unit in San Diego. The company's work leverages its systems integration capability, as well as advanced technologies derived from extensive experience in the design and development of numerous aerial targets and other advanced aircraft.