PC News Star Trek Armada II Demo
Mad Doc Software and Activision have released a playable demo of Star Trek: Armada II, available for download from FilePlanet. The 86.9 MB demo contains the first mission in the Federation campaign and one Instant Action and Multiplayer map, but save/load games have been disabled. 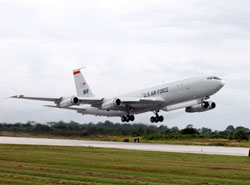 Airframe refurbishment and modification takes place at Integrated Systems' Airborne Ground Surveillance and Battle Management (AGS&BM) Systems facility in Louisiana. The Joint STARS radar and the computer systems are installed at AGS&BM Systems Florida facility, where the team completes work on the production aircraft with ground and flight-testing. AGS&BM Systems also provides support to the user under a Total System Support Responsibility (TSSR) contract. The TSSR effort is a partnership between Northrop Grumman and the Air Force to provide the most efficient support to the E-8C Joint STARS fleet, maximising operational availability and mission reliability.

The Ministry of Defence (MOD) has placed an £8 million order with Kent-based FLIR Systems for its STAR-Q thermal imager. Sixteen RAF Sea King helicopters across the UK will be equipped with the detectors.

While their primary purpose is to find missing military personnel, they will also be used by RAF crews called out to help find lost climbers, sailors and fishermen. 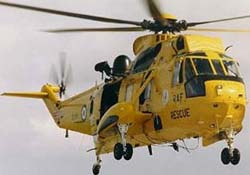 STAR-Q detectors enables RAF crews to detect a thermal signal at over 1000 metres and identify a person at 500 metres on land and 750 metres at sea. Their infa-red capability makes it possible to detect a missing person in conditions that make visual identification very difficult or impossible.

For mountain rescue particular it has many benefits, since RAF crews will be able to scan the ground far quicker that at present and either complete the rescue themselves or direct mountain rescue teams to the missing person.

Currently search and rescue teams use aids such as radar, radio homing and night-vision goggles, which give limited assistance to what is in effect-searching by eye. Because of these limitations search techniques require visual search patterns to be flown along narrow tracks, usually at low levels because of the limits of human eyesight. As a result searches can be slow and costly in terms of flying hours and increase risk to the crew by requiring them to fly close to the ground, frequently in poor weather conditions.

By contract, modern sensors, particularly those operating within the infa red spectrum, are capable of providing clear images in conditions that make visual identification either very difficult or impossible. The new system reduces search time by allowing crews to search along wider paths from higher attitudes, significantly reducing the flight risk inherent in flying at low level in adverse conditions. As a result crews are expected to be able to increase the number of missions they can fly, helping them locate missing people far quicker that at present.

The STAR-Q system consists of a turret, containing a high resolution (640 x 480 array) Thermal Image Camera linked with a CCD-TV camera and a powerful zoom lens, mounted on the lower fuselage of the helicopter, which feeds a signal to a monitor and a VCR inside the helicopter.

The first STAR-Q system should be installed in mid-2003 with all systems in place by mid-2004.

Boeing To Explore Electric Airplane
Boeing Commercial Airplanes will develop and test an electrically powered demonstrator aeroplane as part of a study to evaluate environmentally friendly fuel cell technology for future Boeing products. The aircraft manufacturer is working with Boeing's new Research and Technology Centre in Madrid to modify a small, single-engine aeroplane by replacing its engine with fuel cells and an electric motor that will turn a conventional propeller.

The idea of fuel cells and electric motors is not to replace jet engines on commercial transports, but the gas turbine auxiliary power units, which are coupled to generators and compressors to produce electricity and air for aeroplane systems while on the ground and for backup use in flight.

A fuel cell is a chemical engine that produces electricity directly through an electro-chemical process. Like a battery, a reaction inside the fuel cell creates direct-current electricity. Unlike a battery, which needs to be recharged, fuel cells keep working as long as the fuel lasts. Fuel cells are inherently cleaner and quieter than auxiliary power units. They have fewer moving parts and can generate more than twice as much electricity with the same amount of fuel.

"Our ultimate goal is to replace the auxiliary power unit," said Dave Daggett, associate technical fellow in the environmental performance strategy group. "But first, we're going to learn more about fuel cells by powering a small aeroplane and, as the technology matures, use fuel cells to power an aircraft electrical system, such as the in-flight entertainment system."

Test flights of the electric aeroplane will begin in Europe in early 2004. Boeing Madrid will design and integrate the craft's control system and NASA, fuel cell manufacturers, the automotive industry and several European universities are supporting the project.

MH-60S Programme Moves Closer To Full Rate Production
The Sikorsky Aircraft MH-60S helicopter has entered the Operational Test and Evaluation (OPEVAL) phase, the final phase in development before the start of full rate production. Three MH-60S helicopters will take part in field test operations through January and the results will then be presented to the US Navy. A successful completion of OPEVAL is expected to lead to the Navy's recommendation to the Department of Defense for full rate production. The Navy's Helicopter Master Plan calls for the purchase of up to 237 MH-60S aircraft to replace the CH-46D.

Since the Navy awarded the first MH-60S contract to Sikorsky in 1997, 19 MH-60S aircraft have been delivered and the first aircraft are scheduled to join the Navy fleet in 2002. "The MH-60S will prove itself a rugged, versatile, multi-mission aircraft for the Navy in the 21st century," said Sikorsky President Dean Borgman. "It will build and enhance the world-wide reputation of the Sikorsky H-60 line."

The first production MH-60S completed its maiden flight January 27, 2000. Six aircraft were delivered under the Lot I contract awarded in September 1999 and 14 will be delivered under the Lot II contract awarded in 2000. Lot III calls for delivery of 15 aircraft between November 2001 and January 2003. Following OPEVAL, the MH-60S will join the fleet at Naval Air Station North Island, where Helicopter Combat Support Squadron Three (HC-3) will train pilots, aircrew and maintenance personnel on the aircraft. The MH-60S will see its initial fleet service in 2002 at HC-5 in Guam.

Lockheed Martin Demonstrates F-16 Four-Ship Training System
Lockheed Martin Training is demonstrating its four-ship F-16 Training System at the Interservice/Industry Training Simulation and Education Conference in Orlando this week. F-16 pilots will fly multiple types of missions through a visual database that displays imagery at up to one-half meter resolution.

"Integration of a high-fidelity F-16 cockpit with three role player stations will give conference attendees a hands-on opportunity to test basic elements of the distributed mission training (DMT) paradigm now taking shape at US Air Force bases," said Rich Roop, director-simulation and training business development at Lockheed Martin in Akron. "Pilots will fly various four-ship missions or force-on-force missions to show the versatility of our system design and how we apply the DMT philosophy to training."

Three role-player stations with individual VisionStation visual systems join the new high-fidelity F-16 simulation device to make up a four-ship demonstration unit. The role-player stations have basic flight controls-stick and throttle-and communications connectivity with the support aircraft as a mission is configured.

After a mission is completed, pilots use the debrief station to review the mission from any point in time, from beginning to end. "The timeline feature lets pilots and instructors choose the exact points in a recorded mission that they want to evaluate. It allows specific lessons to be reinforced while the mission is still fresh in participants' minds," Roop said. "This quick replay from any point in the mission provides a responsive feature that enhances the overall effectiveness of the training system. This is one feature, among the many, that separates our training solution from others in the industry."