PC News MiG Alley Source To Be Released Soon?
Rumors are swirling that the MiG Alley source code is soon to be released. COMBATSIM has not be able to confirm this, but we are working on it. We will keep you posted.

Wolfenstein MP Test 2
Activision has released an new multiplayer test demo of Return to Castle Wolfenstein, the first-person shooter that is nearing completion at Grey Matter Interactive and Nerve Software.The 57.7 MB file is a bit smaller than the first test but still contains the same map, and there's a massive list of new features, changes, and bug fixes included on the download page. Download

Edge of Chaos SDK Released
Particle Systems has announced that the first Software Development Kit (SDK) for Edge Of Chaos is now available for download. The Graphical SDK allows you convert Lightwave objects and textures into the game's format, and also includes documentation on how to create and set up ships and weapons for Edge Of Chaos. The SDK also includes uncompressed versions of the player ship textures, that you can edit using standard paint programs. Download

Military News Edwards Prepares To Test Military's New Fighter
The competition is over but preparations to fully develop the Joint Strike Fighter are in full swing at the Air Force Flight Test Center here.

The government's selection of Lockheed Martin Corp., as the prime contractor Oct. 26 allowed the JSF to enter its next acquisition phase -- system development and demonstration.

This phase will evolve the fighter, now known as the F-35, from a concept demonstrator to a combat-capable fighter aircraft.

Initial plans call for 14 test aircraft to be built, with seven going to Edwards and seven going to Naval Air Station Patuxent River, Md., said Joe Dowden, the JSF Site and Integrated Test Force director at Edwards. Both sites will serve as principal testers for the JSF demonstration. Both will conduct testing on all of the JSF variants, including the Air Force, Navy and Marine versions, as well as the foreign version of the aircraft. 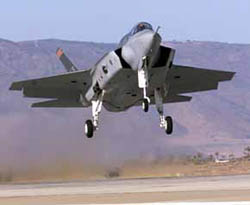 Lockheed Martin Corp.'s winning aircraft designs for the Air Force, Navy, Marine Corps and United Kingdom will be developed throughout the next 48 months.

The first JSF aircraft is set to arrive here for flight testing in late 2005, Dowden said.

With the 10-and-a-half year contract awarded, Dowden said he is starting to build up the integrated test force here while working closely with his counterparts at the JSF integrated test force in Patuxent River. Both will support a three-phased block approach to evolve the aircraft's mission capabilities.

The first block of testing includes the evaluation of the aircraft's airworthiness, its ability to carry internal weapons and its envelope expansion qualities.

"Our developmental, demonstration test and evaluation challenge now is to improve our joint processes between Edwards and Patuxant River Naval Air Station so that we ensure seamless testing of the Air Force, Navy, Marine Corps and the United Kingdom variants on the West and East Coasts," Dowden said. "All this will be necessary to get the JSF aircraft to the warfighters on schedule, with the capabilities they will need for future defense of our national interests."

The test force is also planning to receive more than $30 million in military construction funds to renovate and add facilities that will support and house the JSF test fleet, Dowden said.

The Air Force will be the largest JSF customer, purchasing 1,763 of the conventional takeoff and landing version of the aircraft. The Air Force version is designed primarily for air-to-ground combat to replace the F-16 Fighting Falcon and A-10 Thunderbolt II and to complement the F-22 Raptor.

Boeing Co., and Lockheed Martin Corp., were each awarded contracts to compete in the concept demonstration phase of the JSF program in 1996. Both began flying their concept demonstrators, the X-32 and the X-35 variants respectively, here in the fall of 2000. The JSF X flight-test program was completed in August with the last flight test mission of the X-35B and its ferry to the Lockheed Martin Corp., facility in Palmdale, Calif.

"This last flight closed out the most successful X demonstration flight-test program in this nation's history during which many aviation firsts were achieved and new test and evaluation benchmarks set," Dowden said. (Air Force Flight Test Center Public Affairs)

JSF Expected to Generate $4 - $5 Billion for Goodrich
Goodrich Corporation announced today that it will supply the landing gear and lead the landing system integration effort for the Lockheed Martin Joint Strike Fighter (JSF). The company estimated the potential value of this business at $4-$5 billion over the life of the new fighter jet program, including original equipment and aftermarket sales and service, but excluding foreign military sales.

Goodrich has a signed agreement in excess of $70 million for the initial System Design and Development phase for the landing gear and the undercarriage integration. In addition to landing gear technologies, Goodrich will provide fuel quantity gauging components and the associated wiring harnesses as part of the aircraft's fuel measurement system.

Goodrich also intends to leverage its broad range of products, systems and experience to provide other technologies to this critical program. The company will be pursuing additional JSF content opportunities for aerostructures, engine systems, lighting systems, avionics and sensors as they become available.

TRW has an agreement with Northrop Grumman to provide the weapons bay door drive system for the Lockheed Martin JSF variant. With current market projections for the JSF expected to exceed 3,000 aircraft, the potential value of the award to TRW Aeronautical Systems, including prototype and production hardware, is expected to exceed $600 million over the life of the programme.

Northrop Grumman, a principal member of the Lockheed Martin JSF team, is responsible for integration of the centre fuselage and weapons bay door drive system as part of its work share.

"The specific capabilities that they'll bring in this theater, I won't specify," said Stufflebeem, Joint Staff deputy director of operations for current readiness and capabilities. However, he noted, the capabilities of the Joint Surveillance Target Attack Radar System are a matter of public record, and they come in handy "when you're looking for trucks or SUVs that are moving around." 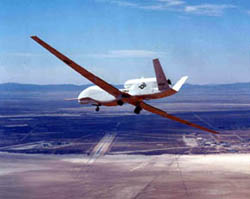 The admiral suggested that Global Hawk, an unmanned aerial reconnaissance vehicle, has a long "dwell time" that allows it to remain airborne longer than other aircraft to collect intelligence information.

He said that U.S. and allied air operations in Afghanistan Nov. 1 included targets involving active and suspected Al Qaeda terrorist and Taliban cave complexes, and a variety of other Taliban troop and military targets arrayed against Northern Alliance opposition forces.

Stufflebeem described the current situation between Taliban and Northern Alliance forces battling near the northern Afghan city of Mazar-e Sharif as "fluid."

Stufflebeem showed reporters imagery depicting strikes made by Navy F-18 jets on two Taliban armored vehicles and a Taliban command and control building near the southern Afghan city of Kandahar.

Yesterday, Defense Secretary Donald H. Rumsfeld told Pentagon reporters that he would like to triple the number of U.S. special forces troops on the ground assisting anti-Taliban forces in some parts of Afghanistan. The admiral noted today that freezing rain is currently delaying the deployment of more of those kinds of troops.

Stufflebeem noted the U.S. military and its allies "have the means" to tighten the noose around elusive terrorist Osama bin Laden, still believed to be holed up somewhere in Afghanistan. The admiral said he didn't know when bin Laden would be captured or eliminated, but agreed with President Bush's announcement today that U.S. or allied forces would eventually "get" him.

"The noose" around bin Laden "is tightening," Stufflebeem emphasized. Afghanistan "is getting much smaller," offering fewer and fewer places for bin Laden to hide, he concluded. (American Forces Press Service)

Ramadan and War
A great debate is ongoing about whether the United States and its coalition allies will continue the campaign against terrorism during the Muslim holy month of Ramadan.

U.S. and allied officials won't say what they will do, figuring the enemy doesn't need to know the campaign plan. But what is Ramadan and why would people think it's a good idea to stop a war during it?

Ramadan is the ninth month of the Islamic calendar. The lunar-based calendar figures the start of the month from the first sighting of the crescent moon. This year, calculations say Ramadan starts Nov. 16.

Ramadan is a month of fasting for Muslims. One of the five pillars of the faith, fasting is compulsory for every Muslim adult. The word "fasting" is a loose English translation -- the Arabic word, "sawm," literally means "to refrain," but in Islam means refraining from food, drinks and sexual activity from dawn to sunset. The month will end Dec. 16 with the celebration of Eid-ul-Fitr.

The people of the Arabian Peninsula practiced fasting during Ramadan before the Prophet Mohammed. Jewish and Christian prophets, most notably Abraham, Moses and Jesus, practiced fasting. The Koran says, "O ye who believe! Fasting is prescribed to you as it was prescribed to those before you, that ye may (learn) self-restraint."

Muslims during Ramadan are encouraged to do good deeds, refrain from habitual and reprehensible deeds. The Koran says Allah, the Almighty, ordains special rewards for good actions and thoughts during this month.

The virtues of fasting and other recommended actions by the Prophet Mohammed teach Muslims how to appreciate those virtues and get nearer to Allah, and put an end to vices, bad habits and character faults.

Mohammed received the Koran from Allah during Ramadan. It is called the Night of Power (Lailat-ut Qadr) or the Night of Blessing (Lailat-ul Mubarak). This was the night when the Koran was revealed to mankind. Prophet Mohammed recommended Muslims search for this night of power in the odd nights of the last 10 nights in Ramadan.

The most famous instance was the Battle of Badr, which took place on the 16th day of Ramadan. The Prophet and 313 of his companions set out to intercept a caravan from Mecca. They were met by a well-equipped army of the nobility of Qurayish. The Qurayish ruled Mecca, and Mohammed considered them idolaters. Though outnumbered. Mohammed and his followers fought to a draw.

The final campaign against the Qurayish was also during Ramadan. Mohammed led a great army from Medina to Mecca to take and purify the Ka'aba, the holy shrine built by Abraham and Ishmael. Seeing the power of the army, the Quyarish surrendered Mecca without a fight. Following the city's occupation, Mohammed sent detachments to outlying areas, where Muslims destroyed the idols of al-Lat, Manat and Suwa.