PC News New Screens: Flight Simulator 2002
COMBATSIM received these exclusive screenshots showing off the aerobatic feature in Microsoft's Flight Simulator 2002. FS2002 lets players fly and navigate some of the most advanced civilian aircraft, including the Cessna Caravan amphibious floatplane and the Boeing 747-400 jumbo jet. Flight Simulator 2002 is available in a standard version and the professional version. 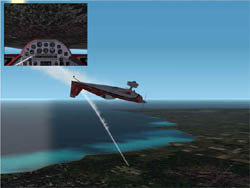 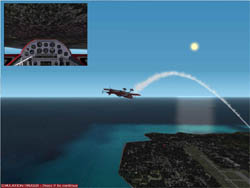 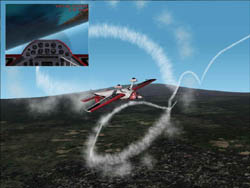 Global Operations will feature team-based action in 16 different real-world locations, including Peru, Sri Lanka, Mexico, Ireland, and the South China Seas. The game will include more than 30 types of realistic weapons and a variety of equipment, such as body armor, night-vision goggles, binoculars, and medical kits. Release Date: Early 2002. 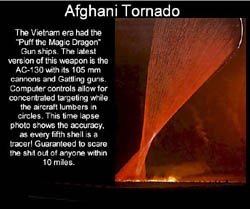 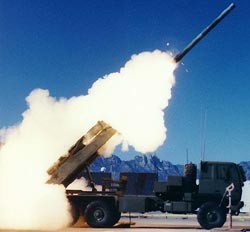 Lockheed Martin Missiles and Fire Control developed and manufactured four operational HIMARS prototypes as part of the Army's Rapid Force Projection Initiative Advanced Concept Technology Demonstration contract, which was awarded to the company in March 1996. Three of the wheeled vehicles (a platoon) are undergoing user evaluation at the Army's XVIIIth Airborne Corps Artillery and a fourth vehicle has been retained by Missiles and Fire Control for testing and evaluation.

HIMARS is a C-130 transportable, wheeled, indirect fire, rocket/missile system capable of firing all rockets and missiles in the current and future MFOM. The system will extend the range of support provided to fighting forces from 30 km to 60 km.

The HIMARS fire control system, electronics and communications units are interchangeable with the MLRS M270A1 launcher, and the crew and training are the same. Because of its size, HIMARS can be deployed into areas previously inaccessible to the larger aircraft required to transport the standard MLRS launcher. It retains the self-loading, autonomous features of the MLRS.

Harris Expects $2 Billion In Avionics Work On JSF
The Harris Corporation expects to provide more than $2 billion in advanced avionics systems design, development, and production work for the Lockheed Martin Joint Strike Fighter (JSF) aircraft. Lockheed Martin was selected by the Department of Defence on October 26th to lead the JSF programme, which is valued at approximately $200 billion in total and will be a cornerstone of future defence capability for the United States and its allied partners.

As part of the Lockheed Martin JSF team, Harris expects to design, develop, and produce next-generation avionics infrastructure, image processing and digital map software, fibre-optic physical layer components and interconnects, high-speed communications data links, and other components such as power supplies, RF backplanes, and portions of the Communications Navigation & Information (CNI) system. These systems are critical to providing an efficient, high-capacity, and affordable avionics capability. The programme is expected to produce around 3,000 JSF aircraft to replace the A-10, the AV-8 Harrier, the F-16 and the F/A-18. 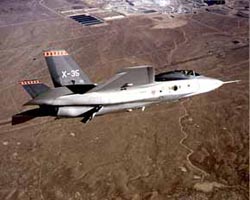 The order, worth a total of SEK 60 million, represents the first phase in a long development process. The confirmed order and related option cover a period up to November 2002.

A first preliminary objective, to be achieved by 2005, will be to demonstrate how the new technology can help the transformation of the Swedish Defence Forces into a Network Centric Defence system. 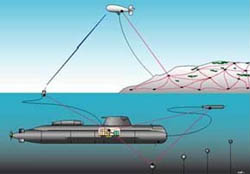 Anders Jansson has been appointed project manager at Kockums, with Par Dahlander as project sponsor.

"LedsystT is the name of a major development project designed to produce a joint-forces information/command-and-control system. The name 'LedsystT' is an abbreviation of the Swedish for Command-and Control system," explains Par Dahlander.

The project comprises a series of studies extending all the way to 2010, with a systems demonstrator planned for 2005. Kockums' business interest in the project is to find and develop new products and develop new know-how that will strengthen the Company's position - and add value to our products.

Honeywell Expects $5 Billion Plus From F-35
Honeywell says it expects revenues generated from Honeywell products, systems and services on the Lockheed Martin Joint Strike Fighter to exceed $5 billion over the life of the new fighter jet programme.

Honeywell's presence on the fighter jet includes the landing system's wheels and brakes, onboard oxygen-generating system, engine components, and the power and thermal management system driven by an integrated auxiliary power unit (APU). 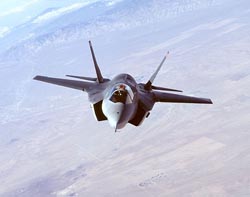 Other Honeywell products being finalised for the programme include radar altimeter, inertial navigation/global positioning system and air data transducers. Beyond new components and systems, the company also will provide repair and overhaul maintenance services, including spare parts.

"We expect to begin realising revenues from the programme beginning in the first half of 2002," said Honeywell Chairman and CEO Lawrence A. Bossidy.

War On Terrorism War Will Continue Until Americans Live Without Fear
Pointing out that the Al Qaeda terrorist network crosses more than 50 countries, Defense Secretary Donald H. Rumsfeld said the task is to go after it, and the Taliban, "until Americans can go about their lives without fear."

Rumsfeld and Chairman of the Joint Chiefs of Staff Air Force Gen. Richard Myers spoke to the press Oct. 29. AFRTS Radio Report: "SecDef says Taliban and Al Queda responsible for every casualty in the war on terrorism"

Rumsfeld left no doubt where he believes responsibility for the war belongs. "Let there be no doubt, responsibility for every single casualty in this war, be they innocent Afghan or innocent Americans, rests at the feet of Taliban and Al Qaeda," he said. "Their leaderships are the ones that are hiding in mosques and using Afghan civilians as human shields by placing their armor and artillery in close proximity to civilian schools, hospitals and the like."

As the campaign against terrorism enters its fourth week, coalition forces continue strikes against Taliban and Al Qaeda targets throughout Afghanistan, the secretary said. "Our goal is not to reduce or simply contain terrorist acts, but is to deal with it comprehensively," he said. "We don't intend to stop until we've rooted out terrorist networks and put them out of business. Not just in the case of the Taliban and Al Qaeda in Afghanistan, but other networks as well."

But Rumsfeld reiterated that eradicating worldwide terrorism wouldn't happen overnight. "It's a marathon, not a sprint," he told reporters. "It will be years, not weeks or months."

Victory will not come without a cost, he said. "[War is] ugly. It causes misery, suffering and death, and we see that everyday," he said. "Brave people give their lives for this cause. Needless to say, innocent bystanders can be caught in crossfire."

Rumsfeld said at every press briefing he and Myers are asked to respond to Taliban accusations about civilian casualties, much of it unsubstantiated propaganda.

"There are instances where there are unintended effects of this conflict and ordnance ends up where it should not," he said. "That's true of every conflict.

"As a nation that lost thousands of innocent civilians on Sept. 11, we understand what it means to lose fathers, mothers, brothers, sisters, sons and daughters," Rumsfeld said.

But no nation in history has done more to avoid civilian casualties than the United States, he said. "Every day in the midst of war, Americans risk their lives to deliver humanitarian assistance and alleviate the suffering of the Afghan people," he said. "When the Taliban issue accusations of civilian casualties, they indict themselves."

America's task is to put pressure on Al Qaeda and the Taliban to dry up their finance, continue the arrests and interrogations and to gather every scrap of information and intelligence possible, the secretary said.

"It's to continue to force them to move from cave to cave and tunnel to tunnel," Rumsfeld said. "It's to continue to providing humanitarian assistance. And it's to find and stop the Al Qaeda and Taliban military leadership to keep them from continuing their terrorist acts."

Air Strikes Target Caves, Tunnels, Troops
DoD spokeswoman Victoria "Torie" Clarke held an impromptu Pentagon press briefing this morning to give reporters "the top line" of what happened in Afghanistan Sunday, what's being focused on today and to run down responses to rumors and speculations.

Noting that the United States continues to support the Northern Alliance and other opposition groups, Clarke said 79 air sorties flown in the areas of Mazar-e Sharif, Kabul, Jalalabad, Konduz and Bamian struck at targets including Al Qaeda and Taliban caves and the Taliban military.

Secretary of Defense Donald Rumsfeld said in Oct. 28 television interviews that the United States is focused on the caves and that there are a lot of them. "'It's a complex system and we're trying to work through them systematically,'" Clarke quoted Rumsfeld as saying.

Clarke parried reporters' requests for specific details on Enduring Freedom operations. "We can tell you what we plan to do, give a general sense of how we plan to go about doing it, but I'll leave the adjectives up to others," she said of military operations. "We've been consistent about what our objectives are and pretty clear about what we've been doing lately, which is going after troop concentrations, command and control and emerging targets where we find them.

Asked about the second attack on Red Cross warehouses in Kabul over the weekend, Clarke said the strike was purely accidental -- a "different kind of mistake" from the first incident earlier this month. The military's information was incomplete -- attack planners knew the facilities were warehouses, but not that they belonged to the Red Cross.

Rumsfeld Says Progress in War Is Measurable
After three weeks of action in Afghanistan, Defense Secretary Donald H. Rumsfeld said the war on terrorism is going well and there has been measurable progress.

Rumsfeld, speaking to Cokie Roberts on ABC's This Week program, said aircraft now have much better intelligence and that means better targets. The air campaign has also put pressure on Al Qaeda and Taliban troops forcing them to move, and that has given U.S. aircraft additional targets, he added.

Rumsfeld said he has every reason to believe that coalition forces will find Al Qaeda leader Osama bin Laden, but warned that finding him will not end the threat of terrorism. "This is not about a single person, it is about the problem of terrorism," he said. "He is one element of Al Qaeda, there are a lot of leaders.

Rumsfeld said the president has declared war on international terrorism, and U.S. forces are taking the war to these networks. "There is no way to defend everywhere in the world against terrorists, you simply must go find them and root them out," he said. "That is what is under way. To think only of one man is a mistake. Will we get him? I think we will."

Roberts asked Rumsfeld if Iraq supplied the anthrax that has infected so many places in the United States. Rumsfeld said Iraq is listed as a state that sponsors terrorism. "There's no question but that Iraq is a state that has committed terrorist acts and sponsored terrorist acts," he said. But he refused to speculate on news reports on the source of the anthrax or possible U.S. response.