PC News WWII Online KGM V1.30 Fix
A KGM fix has been released for World War II Online base130. Any user that downloaded base130.exe on 10/15 need to download this file to fix the keyboard input problems they are having. Download

New Screens: Cossacks: Art of War
CDV Software presents two examples for creative map editing and for the formation of units.map editor in Cossacks: The Art of War. There are almost no limits, and everybody can create the maps they always wanted to play - in more detail and with more units to control.

"Northrop Grumman's JETS team is dedicated to providing a superior test platform," said Alan Doshier, Integrated Systems vice president for Airborne Ground Surveillance and Battle Management (AGS&BM) Systems. "We've built a strong relationship with the JTF and this will ensure we continue to test the latest technology for the Joint STARS program. The timing of this delivery order will also allow for a seamless transition of test support from FOTS to JETS and provide uninterrupted test coverage for ongoing and future Joint STARS development efforts."

The GR4 programme is an update to the GR1 aircraft that involves modifications to strike, trainer and reconnaissance variants. It enhances the existing GR1 capability and introduces structural improvements and an avionics system enabling the latest weapons and systems to be progressively introduced. 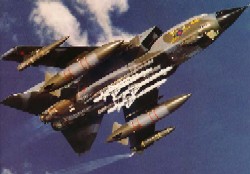 The upgrade includes a range of weapon system improvements including a Thermal Imaging and Laser Designator system (TIALD), which allows it to drop laser-guided Paveway bombs. It also has hands-on throttle and stick controls, a forward looking infra red (FLIR) system and Night Vision Goggle (NVG) compatible cockpit displays, to provide a full night capability. The aircraft also has upgrade navigation and warning systems, with the introduction of a laser inertial navigation system and an integrated global positioning system and ground proximity warning system.

New production methods were introduced from the outset and continually developed during the programme to meet the needs of a modern aircraft return-to-works production environment. The first GR4 aircraft conversion took 12 months; the 100th was completed in just 32 weeks thanks to the new processes introduced.

These new flexible production methods have allowed the team to incorporate 50 additional modifications over and above the original specification. At the same time they have continued to reduce man-hour costs and maintain the same aircraft build timescales.

Steve McNair, Head of Operations, BAE SYSTEMS Military Solutions & Support said: "The success of these achievements can clearly be attributed to the hard work, innovative ideas and commitment of the whole GR4 team."

The FAA-issued Supplemental Type Certificate allows Gulfstream to offer EVS as an option on new GV ultra-long range business jet aircraft and also to install the system as a retrofit on in-service GV aircraft.

The EVS incorporates a unique sensor system based on Forward-Looking Infrared (FLIR) technology developed and manufactured by Kollsman Inc. The EVS sensor projects an infrared, real-world conformal image on Honeywell's Head-Up Display in the cockpit. The image enables a pilot to see through fog and darkness. In-service GVs outfitted with HUD can be retrofitted with EVS to achieve the same safety enhancements.

"As part of our FAA certification flight testing last month, three pilots and an FAA flight test engineer flew 80 approaches using EVS during the day and at night in all kinds of weather conditions," said Mike Mena, programme manager for the GV-SP and EVS. "The Gulfstream flight crew flew the aircraft over mountains at night to show the FAA how well EVS detects terrain. EVS met or exceeded all expectations during this testing, successfully meeting the demanding FAA certification criteria."

U.S. Inadvertently Strikes ICRC Warehouses
At approximately 4:57 a.m. EDT today, Tuesday, Oct. 16, GBU-16 1,000-pound bombs from a U.S. Navy F/A-18 Hornet inadvertently struck one or more warehouses used by the International Committee of the Red Cross (ICRC) in northern Kabul, Afghanistan. Reports from the ICRC indicate that wheat and other humanitarian supplies stored in the warehouses were destroyed, and an Afghan security guard was injured.

Although details are still being investigated, the ICRC warehouses were among a series of warehouses targeted by U.S. forces because the Taliban used them for storage of military equipment. Military vehicles had been seen in the vicinity of these warehouses. U.S. forces did not know that ICRC was using one or more of the warehouses.

U.S. forces intentionally strike only military and terrorist targets, and regret any innocent casualties. The U.S. is the largest donor of food and other humanitarian aid in Afghanistan, and U.S. forces are aggressive supporters of the worldwide effort to help the Afghan people.