PC News Ghost Recon Ahead Of Schedule
Ubi Soft Entertainment has announced that its upcoming tactical shooter Tom Clancy's Ghost Recon is now scheduled for release on November 13, a week earlier than expected. The company also released two new screenshots showing off some of the characters, environments, and lighting effects that will appear in the game.

Sub Command Patch Released
Electronic Arts has released a Sub Command patch 101 which allows multiplayer with other language versions of Sub Command plus much more. Refer to the readme text in the patch for more details. Click here to download the 1.53mb file.

Detonator XP WHQL Certified
NVIDIA announced today that its Detonator XP unified driver architecture has been awarded certification from the Microsoft Windows Hardware Quality Labs WHQL for all versions of the Windows XP operating system, available on Oct. 25. In addition to the WHQL certification for both Windows XP Home and Professional Editions, NVIDIA is the first company to receive certification on Windows XP 64-Bit Edition, which comes with full workstation features and capabilities.

The company's Engineering and Manufacturing Development contract with the Air Force for the Large Aircraft Infrared Countermeasures (LAIRCM) system is valued at $66 million, with production options totaling another $112 million. The Air Force plans to install the LAIRCM equipment on a total of 20 Air Force C-130 and C-17 transport aircraft.

"Inexpensive, yet lethal, surface-to-air missiles have proliferated around the globe and unfortunately are in the hands of our potential adversaries," said Arnold Welch, vice president-Infrared Countermeasures Programs at Northrop Grumman's Defensive Systems Division in Rolling Meadows. "It is essential that our military pilots and aircrews have this sophisticated type of protection in order to perform their missions and return safely."

Orbital Wins Order For USASMDC
Orbital Sciences Corporation has announced that it has been awarded a $24 million development task order by the United States Army Space and Missile Defense Command (USASMDC) for the Short Range Air Launch Target program.

The air-launched target missile will be transported to an area over the ocean aboard a C-130 cargo aircraft. Once at the correct location, the target missile will be extracted from the C-130 using parachutes and stabilised in descent, then its rocket motor will be ignited. This launch method allows target missions to be carried out from locations and directions where no ground-based launch range exists. This capability has already been successfully demonstrated by USASMDC.

The Short Range Air Launch Target vehicle will utilise surplus ICBM solid rocket motors for its propulsion. The target vehicle trajectories will be less than 500 kilometres and will support the Navy Area Wide missile defense program.

Northrop Grumman Receives New Nato Software Contract
Northrop Grumman Corporation's Information Technology (IT) sector today announced that one of its European subsidiaries has entered into a significant new contract with the NATO C3 Agency (NC3A) on behalf of the participating NATO nations. The total value of the purchase for the IT sector's Logicon Europe Ltd. unit is undisclosed.

Since September 1997, Logicon Europe has been providing its ICS product to the Supreme Allied Commander, Atlantic, as the core component of the Maritime Command & Control Information System (MCCIS). MCCIS is integrated by NATO support staff and includes commercial-off-the-shelf products together with NATO-developed applications. It is installed in every NATO maritime headquarters, which includes more than 300 workstations.

To allow the national command staffs to adopt MCCIS for national, as well as NATO, purposes, NC3A has arranged a central contract called "MCCIS For The Nations" (MFN). This allows individual nations to capitalize on the success of the NATO program, and promotes interoperability among allied forces. Each participating nation commits funds annually to NATO to obtain the right to use a suite of Logicon Europe products in their national MCCIS capabilities.

This award for Logicon Europe is a growth opportunity because nine NATO nations have committed to MFN initially, noted Andrew Farrer, Key Business Accounts manager, Logicon Europe. Others may join at any time, subject to successful negotiation with the NC3A, he added.

"We are very pleased to be a major contributor to the success of the NATO MCCIS program, and even more so now that these nations have committed to making MCCIS a key part of their national command and control scenarios," said Mr. Farrer.

This was the first flight test of Boeing's commercial-off-the-shelf booster and the Northrop Grumman-developed software that controls the booster launch. The test successfully demonstrated the capabilities of both the booster and the ground launch system.

GMDS is designed to protect the United States against attack by ICBM's. As the GMDS prime contractor, Boeing selected Northrop Grumman's software to plan the intercept trajectory, command the booster and monitor its status. The software communicates with the booster during prelaunch checkout until the time it commands the booster to launch.

"We are pleased with our software's performance and its contribution to a successful flight test," said Christine Reynolds, vice president, C3I Systems, Northrop Grumman Information Technology (IT). "This flight test was a significant step towards the development of a missile defense system that will protect the United States. Northrop Grumman will continue to apply our command and control technologies to support this very important program."

We regret the loss of any civilian life. U.S. forces are intentionally striking only military and terrorist targets. They take great care in their targeting process to avoid civilian casualties. We have no accurate way of estimating the number of casualties, but reports from the ground indicate there may have been four deaths and eight injured.

Although details are being investigated and may take several days, preliminary indications are that the accident occurred from a targeting process error.

Whiteman B-2s Participate In Air Strikes
The 509th Bomb Wing here took center stage in the war on terrorism when six B-2 Spirits participated in air strikes over Afghanistan during the first three days of Operation Enduring Freedom.

Standing in front of a B-2 named the "Spirit of America," Brig. Gen. Tony Przybyslawski, 509th BW commander, told more than 50 national and international news media representatives about the capabilities of the B-2 and the people of the 509th BW.

"The B-2 performed as advertised," Przybyslawski said. "It was flawless. 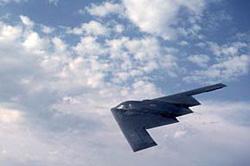 "The B-2's combination of stealth technology, long range, large payload, and precise munitions makes it the world's most capable long-range bomber," he said. "But the B-2 is just an aircraft until you add people. We have America's best (people) flying, maintaining and supporting this aircraft. I couldn't be prouder of these people."

All six of the B-2 sorties were longer than 40 hours, with the longest a little more than 44 hours, Przybyslawski said.

The 44-hour mission is the longest combat sortie in the history of aviation, he said.

B-2 pilots train for these missions by regularly flying long-duration sorties in the wing's flight simulator. They fly simulator sorties as long as 50 hours, Przybyslawski said.

"We have a tremendous training program," he said. "We combine the human factor with technology to ensure our pilots are ready for long-duration missions."

The record missions originated here, attacked targets in Afghanistan, then landed at Diego Garcia, a British island in the Indian Ocean, Przybyslawski said. After about an hour on the ground for an engine-running crew change, the jets were airborne again with a fresh crew on board for the more than 30-hour flight home.

"The fact these aircraft never shut down their engines for more than 70 hours highlights the durability and reliability of this weapon system," Przybyslawski said. "Every aircraft landed here 'code one,' which means they are mechanically ready to go again."

He praised the teamwork of everyone involved in making the B-2 so successful in the opening days of the war on terrorism.

"To pull off a combat sortie takes a tremendous amount of teamwork by countless people," he said. "From the support of tanker units who refueled the B-2 to the seamless integration with other aircraft to form a strike package, to the support of our allies around the world, this was a team effort. The B-2 was just a small part of the entire operation."

When asked by a CNN reporter if the B-2 would be tasked to support operations again, Przybyslawski said he couldn't discuss operational details, but also said "we're ready" if called upon.