Real War Enhancement Kit Revealed
Rival Interactive has announced the development of the Real War Enhancement Kit. The Enhancement Kit addresses a handful of issues that the community has expressed a desire to have changed. Issues include, adjustment to anti aircraft units, infantry firing on tanks and finer balance in power between the two sides, the U.S. and the enemy ILA. The free upgrade will also contain at least four new multiplayer skirmish maps geared toward four-person gameplay. Released Date: Three Weeks. For more details click here

Operation Flashpoint Beta V1.26 Released
Operation Flashpoint Public Beta version 1.26 is available now. It introduces major rework of the network code that should lead to notable improvement of multiplayer performance. There are a lot of bug fixes as well. For more information click here.

WWII Online V1.3.0 Due Monday
Playnet.com and Cornered Rat Software have announced that the update to World War II Online is scheduled for release on Monday October 15th. "We are in the final phases of testing 1.3.0 and it appears we will be ready for release on Monday", says Producer Chris 'MO' Sherland.

Military News Photo of the Day 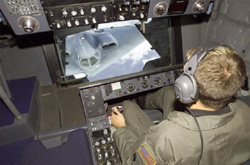 The new bombing system will be fitted to the Tornado GR4, the Harrier GR7, the Eurofighter, and possibly the new Joint Combat Aircraft. It will use a 500 lb bomb - smaller, more accurate and more effective in bad weather than the current Paveway 2 and Paveway 3 (1000 lb and 2000 lb) bombs used by the RAF.

Alenia Marconi Systems, Elbit Systems Ltd, Leigh Aerosystems, Northrop Grumman, Raytheon, and SAGEM have been invited to tender for the new system, which is due to enter service in 2006.

The system will be designed around the US Mk 82 type warhead, which offers the benefits of interoperability with our NATO allies, a greater choice of fuzing options, and economies of scale.

Until the new system enters service, the RAF is being provided with an interim Precision Guided Bomb capability, ordered after the experiences in the Kosovo campaign underlined that the ability to bomb accurately in all weathers was a priority requirement. The interim capability - based on an enhanced version of Raytheon's Paveway 2 and 3 bombs, using the Global Positioning System to give increased all weather accuracy - is due to enter service with Tornado GR4 aircraft on 27 October.

This marks the first time in NATO's 52-year history that the alliance's assets are being used to help protect the United States, NATO officials said. 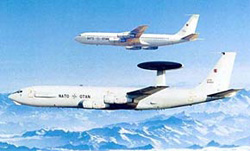 The AWACS planes, plus a support aircraft, will assist the United States' continental defense operations which have increased since the Sept. 11 terrorist attacks, said Capt. Ed Thomas, spokesman for the North American Aerospace Defense Command, Peterson Air Force Base, Colo.

The first NATO aircraft deployed Oct. 9 from Geilenkirchen, Germany, and the last of the five are expected to be in place at Tinker Air Force Base, Okla., by Oct. 11, Thomas said.

The aircraft, under NORAD command, will be flown by multinational crews from 12 NATO nations, he said. NORAD is responsible for air defense and early air warning for North American airspace.

The aircraft feature high-tech airborne surveillance, command and control, state-of-the-art communications systems and a crew of up to 19, depending on the mission, he said. The NATO AWACS planes, he said, will be providing radar coverage and surveillance operations for NORAD combat air patrols.

"They'll augment what our U.S. resources were doing ... and provide an enhanced situational awareness to NORAD," he said, adding that the planes would "be here as long as we need them."

After the terrorist attacks on America, NATO invoked Article 5 of its charter, which states that a foreign attack on one NATO member is considered an attack on the other 18 NATO members.

Ralston said NATO naval assets taking part in an exercise off the coast of Spain have been reassigned to the Standing Naval Force Mediterranean, consisting of nine ships from eight NATO countries.

"They've set sail to provide an allied military presence in the eastern Mediterranean and to demonstrate our resolve," he said.

"These two actions underline the unwavering commitment of the 19 NATO nations to fight terrorism," Ralston said. "We stand ready to provide any additional support requested by the United States, on order of the North Atlantic Council."

Allies Cloak Afghan Campaign in Secrecy
LONDON (Reuters) - Washington and London are keen to cloak the details of their war against terrorism in secrecy, but key aspects of the campaign could be forced into the open if Afghanistan's rulers start using the media to their advantage. Military analysts believe that if the ruling Taliban allow international news teams to report on the bombing of their country, the allies will have to explain themselves more fully. [More...]