"On the cusp of release Jane's Attack Squadron had a really great buzz around it, but unfortunately, was placed on hold," says Ian Davis, Ph.D., CEO of Mad Doc. "Looking Glass Studios had done a great job with it, so much so that we've brought the core team from the game together to finish what they started."

"We're very excited at the prospect of being able to finally complete Jane's Attack Squadron for Xicat. And since Mad Doc has managed to bring back many of the original team members, we can ensure that the finished product will closely reflect our original vision of the game: an action-packed World War II air combat simulation accessible to users of all skill levels." says Steve Nadeau, former lead designer on the game, and now a lead designer at Mad Doc.

No release date has been set.

Microsoft Loses Antitrust Appeal in Supreme Court
WASHINGTON (Reuters) - The U.S. Supreme Court on Tuesday rejected Microsoft Corp.'s request to overturn a ruling that the software giant violated U.S. antitrust laws, leaving the case in the hands of a lower court which has ordered settlement talks in the landmark case. The high court declined without any comment or dissent to review the June 28 ruling by the U.S. Court of Appeals for the District of Columbia, which concluded Microsoft had illegally maintained its monopoly over the market for personal computer operating systems. [More..]

The aircraft will stay in Stratford for additional tests and be flown later this autumn to Sikorsky's Development Flight Centre in West Palm Beach in Florida., where it will begin a rigorous flight schedule. The S-92 is scheduled for 2002 certification. 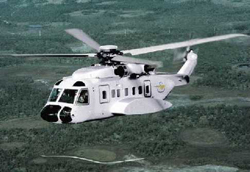 Aircraft 4 is the last S-92 prototype to be completed and the first that incorporates both the customer-inspired design changes and the Rockwell Collins cockpit. In response to requests for additional cabin space and a larger main cabin door, Sikorsky has increased the S-92 cabin length by 16 inches (41 cm), reduced the height of the tail pylon and relocated the horizontal stabilizer.

At the centre of the Rockwell Collins AMS are four portrait 6 x 8-inch high-resolution colour active matrix liquid crystal display Multi-function Displays, with a fifth display to be offered as a customer option. The displays are sunlight and cross-cockpit readable, and are also compatible with night vision goggle operations.

All subsequent S-92 aircraft will include the design changes as well as the Rockwell Collins cockpit.

"The Rockwell Collins cockpit incorporates the most advanced avionics technology available today for rotorcraft," said Nick Lappos, Sikorsky's S-92 Programme Director. "The unique schematic data presentations provide pilots with a visual depiction of the aircraft's condition that is intuitively easy to interpret, a real plus in emergency situations."

The AMS draws upon the previous experience and developments with Sikorsky for the S-70A and S-70B International Naval Hawk helicopters.It provides the first step in helicopter implementation of the Collins Flight2 open systems architecture and represents a major step in supporting the reduction of overall aircraft systems costs, system weight and improved performance capabilities.

In addition to the MFDs, Rockwell Collins AMS consists of Data Concentrator Units (DCUs) and a Maintenance Data Computer (MDC). The Collins DCU's provide the interface between the S-92 aircraft systems and the MFDs, while the MDC provides the single point collection for maintenance and performance data of the aircraft systems. Rockwell Collins will also provide the radio and navigation equipment to be certified for delivery to initial civil customers of the S-92.

In all, the S-92 programme has accumulated more than 760 hours in flight test. Aircraft 2 has flown over 380 hours. Aircraft 3 has accumulated 221 flight hours since first flying in October 1999, including flight evaluations in military mission applications. Aircraft 5, which validated the longer cabin and lower tail, joined the flight programme in early 2001 and has logged more than 157 hours in the air. The Ground Test Vehicle, Aircraft 1, completed the 200 hour FAA endurance run to certify the entire drive system including main, intermediate and tail gearboxes in 1999.

Russia Crash Probe Finds Parts Like Missile Pieces
SOCHI, Russia (Reuters) - Speculation that a rogue missile downed a Russian airliner over the Black Sea intensified Tuesday after investigators said they had found fragments similar to missile components in the wreckage of the jet. Experts said also that a radio locating station had picked up an unidentified object flying toward the scene where the airliner exploded and crashed Thursday with the loss of all 78 passengers and crew. [More...]

Federal Government Authorizes Stronger Cockpit Doors
WASHINGTON (Reuters) - One day after the latest in-flight scare aboard a commercial jetliner, U.S. regulators on Tuesday granted airlines wide latitude to reinforce cockpit doors aboard commercial aircraft. The Federal Aviation Administration regulations leave it up to each airline to determine the safest and most-effective way to reinforce access to the flight deck. The rules, which are effective immediately, were issued just days after a federal task force recommended stronger cockpit doors as a way to protect pilots from potential intruders. They give airlines wide discretion to retrofit cockpit doors, mandating no specific design or engineering standards. The chief requirement is for carriers to notify the FAA within 90 days on the changes they have made. [More...]