Please note today's edition will be the last regular daily posting until Tuesday 2 January 2000. Everyone here at COMBATSIM.COM wish all our readers a happy Festive Season and a prosperous New Year.

PC News Thrustmasters Hotas Update!
Thrustmaster has posted an article/interview with James Hallows on the up-and-coming Hands On Throttle And Stick products. Check it out at the: Thrustmaster Site

IL-2 Weekly Update!
Oleg Maddox's last update of the year. This week Oleg and the team tell us they have been playing LAN deep into the night---Oh Stop! You're killing us. Thanks to the IL-2 team, they have a gift for everyone---a series of images for download. Check out the final update of the year, and get your "gift" at the:IL-2 Forum - Weekly Update 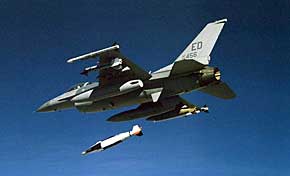 Released from several miles away, the weapon -- set in a Global Positioning System-denied mode -- punched a hole in a target nearly dead center, relying only on JDAM's inertial navigation system and DAMASK's template-matching capability. The test measured what effect DAMASK has in tightening weapon accuracy during a GPS-jamming scenario. (Courtesy photo)

Aces High Version 1.05 Released!
Aces High 1.05 is now available for download. Look for mannable guns, a new plane selection interface, the introduction of perk points and player controlled task groups, and a new scoring system, as well as the naval aspect and a new terrain. New planes in 1.05 include the F6F-5, TBM-3, and the Seafire IIC, and the first boat in Aces High is the Elco 80' PT Boat.

HiTech Creations is currently having some problems with their primary download site. If you can't use that link, the patches are also available from mirror sites. They have rerouted their auto-update system, so that is operational as well but there is limited bandwidth and they ask that you only use the auto-update if you can't download it from their download page. Go to: HiTech Creations

F4Alliance Releases Mig29A Package!
The F4Alliance released their Mig29A package on Christmas Day. The package includes the Mig29A Installer, Sound and Artwork, as well as the Read Me documentation. COMBATSIM.COM hasn't had a chance to go through the package yet, once we do, we will let you know what we think. Until then, you can download the files at: SimHQ News

Military News F-16 Midair-Crash Investigation Results Released!
Air Force investigators have determined the midair collision of two F-16 Fighting Falcons near Moapa, Nev., Aug. 8 was due to pilot error. One jet (Viper 4) was destroyed when it hit the ground on the slopes of the Mormon Mountains. The pilot ejected safely and was picked up by search and rescue forces from Nellis Air Force Base, Nev. The other jet (Viper 1) landed safely despite sustaining damage from the collision.

The pilots were taking part in a tactical-intercept training mission involving a total of four aircraft, with the two mishap aircraft in opposing two-ship elements. All aircraft were assigned to the 422nd Test and Evaluation Squadron, based at Nellis AFB.

According to the investigation report released Dec. 22 by Air Combat Command, there were two main causes that led to the accident. First, the two mishap pilots failed to clear their flight paths prior to the collision. Viper 1 had the principal responsibility for ensuring a clear flight path, but Viper 4 also shared this duty, investigators said. Second, investigators determined that Viper 1 violated flight rules by entering his opponent's pre-planned altitude block and then failing to stop the engagement.

Investigators also pointed out three factors that substantially contributed to the mishap. First, Viper 1 experienced channelized attention while trying to visually identify his opponent. This channelized attention led to decreased situational awareness. Second, Viper 1 made incorrect assumptions about his wingman's and his opponent's positions, leading him to misinterpret the situation. Finally, investigators cited inadequate situational awareness on the part of Viper 4 and his wingman due to poor communication between the two.

"The X-32A approached and exceeded Mach 1 effortlessly, demonstrating significant tactical potential," Cabrera said. "I'm very impressed with the fact that the plane continues to fly as predicted based on extensive modeling and simulation." The X-32A is more than halfway through a five-month flight-test program to validate the JSF's predicted flying characteristics.