Operation Flashpoint Mod, Invasion 1944
Invasion 1944 is a mod for Operation Flashpoint, it plays in the second world war at the west front. Main topic are the fightings between the Allies (US Army) and the Germans (Wehrmacht). One has the possibility to fight in the battle as a infantryman or as a tank crew or as a pilot. It is possible to use fixed cannons such as PAKs, MGs or FlaKs, you can drive your troops to to the main combat line via trucks or let them jump off over the combat area out of a transport airplane.

Matrix Games and SPME Developing Napoleonic Wars
Matrix Games has joined with SPME Technologies to develop Napoleonic Wars, the wargame that gives players a chance to command one of several major powers as they engage in combat and diplomacy.

Matrix chose to develop Napoleonic Wars after wargamers were disappointed to hear of the cancellation of an earlier strategic Napoleon title. "I was always sorry we had to cancel our other game, says Matrix Director of Operations David Heath. Since then, we have been looking to develop a good strategic game on this era. The design has been in development now for a few months, and we decided our fans deserved to know.

"We just fell in love with the game design, says Marshall Ellis of SPME Technologies. I have been playing wargames for many years and this is a game I would want to play on my own time.

New Cossack European Wars Add-On Feature
CDV Software has revealed a new feature to their upcoming Cossack: European Wars add-on. One of these features, which render the add-on grand, is the peace time feature. This features ensures that the gamers participating in a battle do conform to the peace agreement. In case one of the parties fires a shot during a peace time, the respective units will immediately be eliminated! Click here to take a look at this feature demonstrated at an Island-Random-Map.

"Today's introduction of our GeForce Titanium series of GPUs continues our quest to deliver dramatic advances in 3D technology and cinematic-quality graphics on every PC," stated Jen-Hsun Huang, president and CEO at NVIDIA. "The GeForce Titanium Series is our most aggressive product introduction ever. We are delivering twice the performance at every price point. We are also taking a giant step to drive NVIDIA's 'GeForce Shader Technology' aggressively into the mainstream. The combination of GeForce3, Xbox, and the GeForce Titanium Series will create an installed base of NVIDIA's GeForce Shader Technology exceeding 5 million units by early next year. And with our patented UDA driver architecture, we're bringing our industry recognized driver quality, stability, and application compatibility, to the XP platform. The Geforce Titanium Series will be the unambiguous graphics platform of choice of Windows XP."

Military News Raytheon To Modify CF-18 Launchers and Pylons
Raytheon Company has been awarded a $21 million ($32 million CDN) contract by the Canadian Government, Department of Public Works and Government Services, to upgrade launchers and pylons for the CF-18 aircraft. 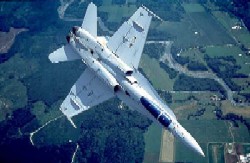 Under this contract, Raytheon will provide modification kits and engineering support to modify LAU-115 and LAU-116 launchers and SUU-63 pylons, enabling the CF-18 aircraft to carry and launch the latest high technology weapons. Work will be performed in Calgary, and Indianapolis, and is expected to be completed by June 2006.

Raytheon also provides repair and support of the radar and other avionics on the CF-18, as well as other high technology systems for the Canadian Army, Navy, Air Force and international customers, at its Calgary facilities.

War on Terrorism U.S. Will Disintegrate Al Qaeda, Rumsfeld Says
The United States will "disintegrate" the Al Qaeda terrorist network, Defense Secretary Donald H. Rumsfeld said Sept. 30. He said the Taliban leaders in Afghanistan have not met one of the demands President Bush made to them following the Sept. 11 terror attacks. The world is going to have to do everything possible to "disintegrate" the Al Qaeda war plan, Rumsfeld said on the NBC program "Meet the Press."

Taliban officials announced over the weekend that Osama bin Laden is under their control. "It was just a few days ago, that (the Taliban) said they didn't know where he was," Rumsfeld said. "So I have no reason to believe anything a Taliban representative would say."

Rumsfeld said the U.S. military needs to transform to address the problems of homeland defense among other things. "This has never been a problem (before), with friends to the north and south and oceans on either side," he said. "Today, because we are a free people, these attacks can come from within."

The United States has refashioned national strategy toward capabilities aimed at countering asymmetrical threats such as terrorism. The change is necessary "so we can arrange and train and organize and equip to deal with the kind of capabilities that are out there rather than orienting them solely to a specific country or threat," he said.

Rumsfeld said the world has always had terrorism, but that terrorists today are especially dangerous because of the weapons available to them. Chemical, biological and nuclear weapons are spreading to countries that harbor terrorists, he said. "One has to recognize the possibility -- the probability -- that at some point these terrorist- sponsoring nations will provide these capabilities to these terrorist networks," he said.

Rumsfeld said the goal in this war on terrorism is the same as it has been in all America's wars: Victory. "The goal is to be able to have dealt with the problems that exist -- in this case, the terror networks and the countries that harbor them -- in a way that we have won," he said. "That they no longer are free to go out and terrorize the world. How that happens, the president's phrase was, 'We need to bring them to justice or bring justice to them.'"

U.S., NATO, Russia Partner in Terrorism Fight
Whatever happens from now on in the struggle against global terrorism, the United States knows it can rely on its fellow NATO members, and Russia, as allies. The United States received "very strong affirmation of support" from its NATO allies and from Russia's defense minister, U.S. Deputy Defense Secretary Paul D. Wolfowitz told reporters late Sept. 26.

Winging home after attending a day of defense meetings at NATO headquarters in Brussels, Belgium, Wolfowitz noted to reporters that he had "good discussions" with Turkish, British, French and Italian NATO defense ministers, and Russian Defense Minister Sergey Ivanov.

"The discussion with Ivanov was almost entirely about counterterrorism. And, clearly, (the Russians) are ready to offer all kinds of help, advice and cooperation," Wolfowitz said. He said he had remarked to the ministers over dinner that, in the United States' view, the events of Sept. 11 make missile defense and cooperation with Russia "more important than ever."

Before the terror attacks, Wolfowitz said, NATO members and senior Russian officials had realized "that one of the areas of common interest on which a new strategic framework could be constructed is a common interest in countering terrorism."

During an evening press conference with NATO Secretary- General George Lord Robertson at NATO headquarters, Ivanov said to reporters through an interpreter that Russia had proposed an anti-terrorism initiative five years ago.

"We drew up a mandate for the Permanent Joint Council between NATO and Russia and we actually put forward the subject of terrorism as a possible area of cooperation, and that is what we're doing at the moment," Ivanov said.

Ivanov said Russia has in past years assisted the Afghan Northern Alliance in its fight to unseat the Taliban government. Many Taliban members had fought against the Soviet occupation of Afghanistan in the 1980s. The Taliban is alleged to have been helping Osama bin Laden, the suspected ringleader of the Sept. 11 terror attacks on New York and Washington, and his al Qaeda terrorist network.

Ivanov said Russia has assured NATO members that it has no ulterior political motives in aiding the rebel Northern Alliance. "Today, I think, virtually, unanimously, we acknowledge that we must strengthen cooperation as much as possible in this area of combating international terrorism," he said.

The Sept. 11 attacks on the United States represent a blatant example of the threat posed by global terrorism, Ivanov said. The Russians, he added, will join with NATO in fighting international terrorism, noting his country has also had "direct experience of terrorism."

Ivanov remarked that he and NATO ministers stressed the importance of not giving the terrorists "any grounds for accusing us that we are attacking Islam in general," adding that Russia is a country where "many nationalities live and many are of the Muslim faith."

Echoing Ivanov's concerns, Wolfowitz noted the importance of preventing the fight against terrorism from being perceived as "Muslims vs. the rest of us, or NATO vs. the Muslim world." He observed that five times in the past decade "NATO has defended Muslims who were victims of aggression or victims of war-induced starvation."

The day after the Sept. 11 terror attacks against New York's World Trade Center and the Pentagon, NATO's Council in Permanent Session for the first time invoked Article 5 of the Washington Treaty, Robertson remarked during a Sept. 26 NATO press conference. The article states that a foreign attack against one NATO member is an attack on all.

Wolfowitz said he explained to the NATO and Russian defense ministers why the United States is convinced that bin Laden and his organization are responsible for the Sept. 11 attacks.

"A lot of what I told them is simply in the public record," Wolfowitz said, adding that "some number" of the 19 hijackers have been linked to bin Laden's network, which has been implicated in the 1998 attack on the U.S. embassies in Kenya and Tanzania, last year's attack on the USS Cole and other incidents.

The Russian response "has not only been befitting a major partner of this alliance, but has also been the reaction of a real and genuine friend. And all of the allied nations and their defense ministers appreciated this very much," Robertson said during the Ivanov press conference.

On Sept. 13, NATO and Russia jointly condemned "the cowardly acts against the United States on Sept. 11," Robertson said. "We are united in our determination to work together in fighting the scourge of international terrorism," he emphasized.