New Screens: Comanche 4
Novalogic has sent us 5 new screenshots from "Comanche 4". "Comanche 4" is a fast-paced action shooter in the sky. "Comanche 4" features scalable flight models, weapons include a 20mm cannon, 70mm rockets, Stinger heat-seeking and 6 campaigns. Environments range from dense forests to arctic tundra to tropical islands to urban cities to vast deserts and the open sea. The game can be played from both first and third person perspectives, as well as in single or multiplayer modes. Release Date: November 1, 2001.

Operation Flashpoint Number One
Codemasters Operation Flashpoint has topped the PC game sales charts in the U.S. for September 9-15. Good reviews and positive world of mouth has spurred on this jump to the top of the rankings. (Ed Note: FS2000 in 5th Position, interesting.) Here are the top ten titles: 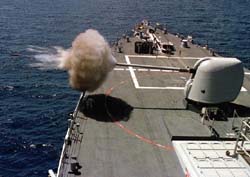 With the exception of range performance confirmation, all test objectives were met. Gun instrumentation, video and radar, and telemetry captured performance parameters.

"The data show we are on track in our development of a low-cost, precise-fire support round," said Dan Murphy, president, ATK Tactical Systems Company. "We are disappointed that a test configuration rocket motor initiator did not operate, thereby preventing flight to maximum range and a clean sweep of test objectives. We will fix and test the initiator within two weeks. Because the operational unit will use a different electronic initiator, no operational design change is needed. Looking ahead, we will return to Wallops Island in early November to fly 50 nautical miles from a standard Navy 5"/54 gun. Next spring we will begin guided flight testing."

ATK is developing ANSR to meet the fire-support needs of ground forces through the existing fleet of more than one hundred 5"/54 guns.

"In tandem with the round under development for the larger 5"/62 gun (being introduced in new construction destroyers), ANSR provides the existing fleet with long-range, affordable fire support capability," Murphy added.

Approximately 3,164,228 shares of Newport News Shipbuilding common stock had been tendered to Northrop Grumman as of 5:00 p.m. E.D.T. on Sept. 27, 2001, including approximately 1,464,762 shares tendered pursuant to notices of guaranteed delivery.

Wolfowitz: Terrorism Fight Means More than Military Action
Don't expect the United States and its allies to simply drop a heavy military hammer on terrorists worldwide and leave it at that.

"I think it can't be stressed enough that everybody who is waiting for a military action because they think that is the definition of a campaign" doesn't understand the war on global terrorism is a multifaceted endeavor, Deputy Defense Secretary Paul D. Wolfowitz said to reporters Sept. 26 at NATO headquarters.

Wolfowitz, attending defense ministerial meetings in Brussels, Belgium, noted that actions have been taken against the terrorists already. For example, he noted, President Bush on Sept. 24 froze the financial assets of some 27 suspected terrorist organizations and individuals.

He said DoD is engaged in efforts to find the terrorists responsible for the Sept. 11 attacks on the New York World Trade Center and the Pentagon and bringing them to justice. However, he added, the ultimate goal is to shut down terrorism worldwide.

Military action may indeed be taken against global terrorists, Wolfowitz said. He also said it is important for the United States and its allies to first gather more information on where the terrorists are and how they operate.

Generating information about crucial targets is part of fighting terrorism, Wolfowitz said, adding that accurate information means more effective results. "We're trying to find every snake in the swamp." But it is also necessary to drain that swamp, he added.

To be effective against global terrorists, Wolfowitz said the United States and its coalition partners must be flexible and adaptive. This means bringing diplomatic, economic, humanitarian and political pressures to bear in addition to military methods, he said.

Members of anti-terrorist coalitions may mix or match specific contributions to achieve goals, such as one member providing diplomatic expertise in a particular region of the world, Wolfowitz said. "Some countries will be very active with us, we think, going after problems that affect them more directly, and (also) helping us with problems that are more remote," Wolfowitz said.

Other countries would be willing to help anti-terrorist nations secretly, Wolfowitz said. "We'll take that help."

Must See Afghans' Lives Are Better Than With Taliban, Rumsfeld Says
WASHINGTON (NNS) -- Many Afghans are being starved and are fleeing the Taliban, and the United States must do all it can to help them, Defense Secretary Donald Rumsfeld said during a Sept. 25 press conference.

Rumsfeld echoed the sentiments of President Bush, who said America's issues and anger are directed at Afghanistan's Taliban rulers, not toward the citizenry. Bush called the Taliban "an incredibly repressive" regime that made a decision to harbor terrorists.

Bush said one way to get rid of Al Qaeda is "to ask for the cooperation of citizens within Afghanistan who may be tired of having the Taliban in place, or tired of having Osama bin Laden, people from foreign soils, in their own land, willing to finance this repressive government."

Rumsfeld's comments at the Pentagon came while he described the situation in Afghanistan for reporters. In the north of the country is an anti-Taliban alliance, he said, then there's the Taliban, and in the south are a number of tribes not affiliated with Taliban.

"It is not a perfectly clear picture where everyone fits into a nice box," Rumsfeld said. Even factions within the Taliban don't agree with the rulers' support of the Al Qaeda terror network of Osama bin Laden.

He likened America's and its allies' options in Afghanistan to playing billiards. Sometimes you watch the balls careen around and don't know exactly what'll happen.

"But the end result, we would hope, would be a situation where the Al Qaeda is heaved out," Rumsfeld said. "And the people in Taliban who think that it's good for them and good for the world to harbor terrorists and to foment and encourage and facilitate that kind of activity, lose -- and lose seriously."

"The mission is to rout terrorists, to find them and bring them to justice," the president said. "Or, in Western terms, to smoke them out of their caves, to get them running so we can get them. I understand the reality of what's taking place inside Afghanistan. We're angry, but we've got a clear vision."

Report: U.S. Special Forces in Afghanistan
WASHINGTON (Reuters) - U.S. special forces have been in Afghanistan for two weeks searching for Osama bin Laden, the prime suspect in the airborne assaults on the World Trade Center and the Pentagon, USA Today reported on Friday. Citing unidentified senior U.S. and Pakistani officials, the newspaper said U.S. commandos arrived in Pakistan on Sept. 13 -- two days after the attacks -- and began moving into Afghanistan with orders to capture or kill the Saudi-born Islamic militant, or pin him down until the United States can launch air strikes. [More...]

Algeria Pilot Arrested in London 'Taught Hijackers'
LONDON (Reuters) - An Algerian pilot arrested in Britain last week was a flying instructor for four of the hijackers involved in the September 11 attacks on Washington and New York, a court in London heard on Friday. Prosecutors made the allegations against Lotfi Raissi, 27, during an extradition hearing. He has denied any involvement in the attacks. "He adamantly denies any involvement in the recent appalling tragedies and is confident that he will be absolved of all involvement," his lawyer Richard Egan told reporters. [More...]