New Screens: Warcommander
The new tactical RTS game "Warcommander" by CDV Software Entertainment AG is about to be completed. "Warcommander" features two single player campaigns with 20 missions each, including special bonus missions, a multi player mode for up to 8 players over the LAN/Internet, and a real time physics engine for lifelike movements. Release Date: Q4, '01

Return to Castle Wolfenstein Mulitplayer Test for Linux
id Software has a FAQ on installing and running the Linux dedicated server software for the Return to Castle Wolfenstein multiplayer test.Click here
Mech Warrior 4: Blacknight Site Launched
Microsoft has launched the official Mech Warrior 4: Black Knight website. The website includes an overview of the expansion's backstory and features, a Flash-powered Mechbay and a new gallery with screenshots.

Warbirds In Danger Of Extinction
The aviation site Aero-News Network is reporting disturbing news regarding a piece of legislation currently waiting for approval by the US Congress. S.1155 would allow the DoD to order the destruction ("demilitarization") of anything the DoD ever owned, like a P-51 or a P-38, or a Corsair, for instance; or the B-17 manual in your town's library. S.1155 Targets Warbirds

General Aviation Remains Grounded
Contrary to media reports general aviation ("private") flights are not currently permitted in the United States (except for Alaska). Only IFR (instrument flight rules) general aviation flights are permitted. VFR (visual flight rules) flight is not permitted. The AOPA (Aircraft Owners and Pilot Association) is meeting with national security officials today. AOPA is providing FAA with additional information about general aviation and the impact of the VFR ban, which FAA will present to the national security officials.

There are concerns that General Aviation will be premanetly prohibited. AOPA President Phil Boyer, in attempting to manage pilot expectations, stated, "One thing is clearly evident from my discussions with FAA management and what little of the national security concerns they can publicly share: the return of VFR privileges will almost certainly be implemented in stages. 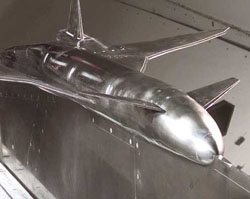 The Sonic Cruiser's new airplane concept is intended to change the way people fly, enabling passengers to travel non-stop directly to their desired destinations in less time. Likewise, it will allow airlines to maximize the economic performance of their airplanes. Environmental performance is an important factor in the design of the Sonic Cruiser; it will be quieter and cleaner than all anticipated regulations and provide excellent fuel efficiency.

The recent Sonic Cruiser wind tunnel tests provided valuable information that will be used in evaluating the general design concepts for the airplane. The specific size, range, capacity and performance attributes of the airplane will be developed and tested as needed. Boeing continues to work together with customers around the world as it evaluates this airplane concept and continues to gather input on airline needs and direction for future travel.

Initial results of the high-speed wind tunnel test are within the range typical for first tests of a new transport airplane design," said Walt Gillette, vice president and program manager of the Sonic Cruiser program. "The test results match the expectations we had based on our modeling approach for this new airplane. We continue to see this concept as a promising new airplane design that is consistent with our view of the future direction for passenger travel," Gillette said. (Boeing Photo)

Taliban Rulers Say They Need Proof of Bin Laden's Guilt
(Reuters) - Afghanistan's Taliban rulers said Tuesday they did not rule out the possibility that Osama bin Laden masterminded the attacks on the World Trade Center and the Pentagon, but needed proof before he could be handed over. [More...]

"Very Small" Hope of WTC Survivors, Giuliani Says
(Reuters) - The possibility of finding anyone else alive in the ruins of the World Trade Center was "very, very small," Mayor Rudolph Giuliani said on Tuesday, one week after the city's skyline and psyche were permanently scarred in an attack by two hijacked commercial planes. "The chances of recovering any live human beings are very, very small," Giuliani said at a news conference. "Those chances are not totally ended or over. We will still conduct ourselves as a rescue effort and a recovery effort." [More...]