Xicat To Publish Jane's Attack Squadron
If you missed this yesterday, Xicat Interactive announced earlier this week that they have reached an agreement with Jane's Information Group for sole licensing rights to publish military simulations under the Jane's brand. The first title under this agreement is "Janes Attack Squadron" being developed by Mad Doc software. "Jane's Attack Squadron" is a World War II flight combat simulation for the PC. Release Date: Q1 2002. Click here for Screenshots and Details.

U.S. Abandons Microsoft Breakup Effort
(Reuters) - The U.S. Justice Department said on Thursday it was no longer seeking the breakup of Microsoft Corp. and would strive to find a remedy in the three-year old case "as quickly as possible." In a statement that initially pushed the technology giant's shares higher, the department said it would also not pursue an unresolved claim that the company illegally tied its Internet Explorer browser to its Windows operating system. "The Department of Justice's Antitrust Division today advised Microsoft that it will not seek a break-up of the company in remand proceedings before the U.S. District Court," the statement said. [More...]

Infogrames,Codemasters Announce Distribution Agreement
Infogrames has announced that it has entered into an exclusive distribution agreement with UK-based game publisher, Codemasters. Under the terms of the one-year deal, Infogrames will be the sole distributor of Codemasters interactive entertainment titles throughout North America. Codemasters expects to publish 17 SKUs in the next 12 months. The first title Infogrames will distribute under the agreement will be Operation Flashpoint. Operation Flashpoint shipped on August 28, 2001. 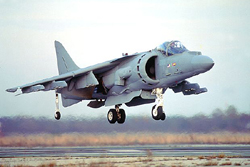 "This second contract validates the success of the LITENING program technology in support of the USMC," said Michael Lennon, vice president-Targeting and Navigation Systems at Northrop Grumman. "The system is particularly well suited for USMC rapid deployment missions since maintenance has been simplified to include 'built-in test.' This eliminates the need for ground test support equipment, while maintaining a meantime between failures of over 400 hours and a LITENING II system availability of 99 percent."

The LITENING II combines night and day targeting and navigation capabilities in a single, low-cost, high-performance pod. It enables the aircraft to detect and identify ground targets for extremely accurate delivery of both conventional and precision-guided weapons. LITENING II features include a forward-looking infrared camera; charge-coupled device television camera; laser spot tracker/range finder sensors; laser marker; and laser designator. The system is currently equipped with a 256 X 256 FLIR. USMC flight tests at China Lake with a 512 X 640 FLIR are ongoing and upgrades are expected.

"This is a key milestone for the Shielder program, marking the completion of our first international contract and culminating five years of development and production work by Larry Paryz and our tactical barrier team," said Hube Hopkins, president, ATK Integrated Defense Company. "With Shielder, the U.K. now has a highly effective anti-tank barrier system that can be used in all tactical operations."

The U.K. Ministry of Defence selected Shielder from a number of competing systems in 1996, awarding ATK a basic contract and options valued at more than $100 million.

CSC Awarded Army Aviation, Missile Simulation Contract
Computer Sciences Corporation has been awarded a task order from the U.S. Army Aviation and Missile Command (AMCOM) to support simulation and development of missile and aviation systems at Redstone Arsenal, Ala. The task order has a ceiling value of $145.8 million if all options are exercised over a five-year period.

CSC will provide a broad range of simulations, modeling and associated engineering support services for both missile and aviation systems. Work will involve live, virtual and constructive simulations for both real-time and non real-time applications, including virtual prototyping and highly immersive, virtual battlefield environments. The task order also calls for vulnerability and lethality analyses of aviation systems and associated hardware.

"We are pleased to continue our 26-year history of helping the U.S. Army improve readiness," said Thomas G. Robinson, president of CSC's Defense Group. "We look forward to supporting all major functional areas of the AMCOM Support Services program."

The Systems Simulation and Development Directorate is a major element of the AMCOM Research, Development and Engineering Center (RDEC) and is responsible for developing, utilizing and maintaining high fidelity simulations to support the U.S. Army's acquisition, requirements, training and related activities. Simulation results are used during the acquisition and readiness life-cycle for development of system doctrine and tactics.

Israel Signs Agreement for 52 More F-16s
Israel signed an amendment to a letter of offer and acceptance (LOA) with the U.S. government for 52 more Lockheed Martin F-16I fighters on September 4. This agreement follows the announcement at the Paris Air Show in June of Israel's intent to exercise an option for more F-16s. These aircraft are in addition to the 50 F-16I aircraft ordered in January 2000 and were an option to that order.

The agreement covers aircraft, logistics support and training, and U.S. government program management and services under the Foreign Military Sales arrangement. Total program value for the option is approximately $2 billion, and Lockheed Martin's portion is approximately $1.3 billion for only the aircraft.

"Israel's sixth acquisition of F-16s demonstrates their continued confidence in the F-16I to satisfy their future defense needs," said Dain M. Hancock, president of Lockheed Martin Aeronautics. "This option extends the F-16 production base to 2009, which not only provides a base for future F-16 sales, but also provides a solid bridge to the possible JSF production at our Fort Worth facility."

The F-16I aircraft are of the same two-seat configuration as the original Peace Marble V program. Many of the electronic systems are being developed and produced in Israel. The aircraft will be powered by the F100-PW-229 engine.

SAAB, BAE SYSTEMS Form Gripen International
The recent success of Gripen in the export market has demonstrated the potential of the BAE SYSTEMS and Saab joint approach to securing export sales for the aircraft. Significant market interest in the Gripen has resulted in sales campaigns in a number of countries. BAE SYSTEMS and Saab will be working closely together to secure and deliver export contracts for this excellent defence system for many years to come. 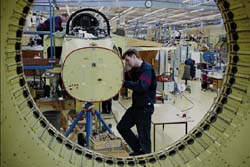 In order to maximise the return from marketing investment, and to ensure effective co-ordination of activities through contract delivery, the two companies have decided to strengthen their export alliance by enhancing their Joint Venture company, Gripen International.

The company, equally owned by the two shareholders and registered in Sweden, was formed on 3 September. It will be staffed by both shareholders, and co-located in offices both in Sweden and the UK. Gripen International will report through its managing director to a joint board.

"This is an important step to focus the activities for the Gripen export as we now create a single prime contract management structure and it confirms our strong commitment to meet all demands from the market," said Ian McNamee, the newly appointed Managing Director of Gripen International.

The establishment of Gripen International comes at a time when the Swedish Airforce is preparing for engagement of Gripen in international peace support operations. "This will further strengthen our market position as it combines the export requirements with the Swedish needs for international interoperability," concludes Kjell Moller, the new Deputy Managing Director of the joint venture company.