"Blitzkrieg" Announced
CDV Software Entertainment has signed a publishing contract with the Russian game developer Nival Interactive on the title "Blitzkrieg". "Blitzkrieg" is a RTS game set during the Second World War. Similar to Sudden Strike, the gamer commands Allied, Russian or German troops. "Blitzkrieg" will include more than 40 different types of infantry, more than 150 types of equipment, and around 250 different buildings and objects.

The game is being developed to be historically accurate, and it will feature 3D units and environments. In addition to a selection of single-player historical battles, Blitzkrieg will include a multiplayer mode with computer-controlled opponents.It will also include a random map and mission generator, as well as several levels of difficulty. A release date has not be set.

Myst III? Considering Ubi Soft is publishing two-thirds of the upcoming combat simulations, we are surprised that none of them made the ECTS line-up. Where is Silent Hunter 2, IL-2 Sturmovik, Lock On: Modern Air Combat? Perhaps it was an oversight. Stay tuned for our ECTS coverage.

Independence War 2: Edge Of Chaos In Stores
Infogrames has announced that Independence War 2: Edge Of Chaos has hit store shelves. As in the original Independence War, this sequel continues to focus on the logistics and physics of a space simulator while incorporating an action/adventure element. New to the series is a revolutionary graphics engine, allowing for such effects as rust, decay and wear on ships and stunning fire and flare effects. All ships in the game are modeled using the same textures and details as the ships in the computer-generated movies. Independence War 2 allows players to command four playable ships with over 100 weapons and upgrades that can be used in near-infinite combinations. With Internet and LAN multiplayer support for up to eight people, gamers can play DeathMatch, Capture the Flag, Bomb Tag or design their own scenarios. Previous Coverage. Review coming soon.

Arrow Weapon System Scores Again
Another successful test of the ARROW Weapon System was conducted yesterday at an Israel Air Force (IAF) test site. The test was a regular system test against a "Black Sparrow" target and was the ninth in a series. The target was launched from an IAF Aircraft toward the shores of Israel, to simulate an incoming ballistic missile. 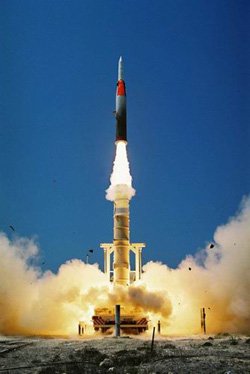 Initial results indicate that all components of the weapon system: the Green Pine radar, the Citron Tree fire control, and the Arrow missile performed as planned. All the test objectives were achieved and the target was destroyed.

The Arrow weapon system is deployed and operated by the Israel Air Force. It can intercept all types of Tactical Ballistic Missiles (TBM) threats existing in the region. Arrow was developed because of these existing threats. 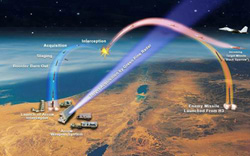 The Arrow programme is a joint US/Israel effort to develop and deploy an anti-ballistic missile defense system for the state of Israel. The information gained from the programme has potential applications in several US missile defence programmes.

Bye Bye Bruggen
The end of an era was reached on 21 August when the last permanently-based combat squadron - No 31 Squadron - of the Royal Air Force in Germany took farewell of RAF Bruggen. Six Tornado GR4 aircraft were waved off by the Burgermeister of Niederuchten, Herr Siegfried Wilms. After almost 50 years, the RAF is withdrawing from Bruggen and, indeed, from stationing in Germany as a UK national formation. 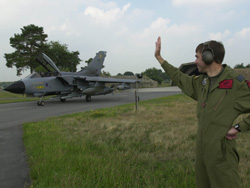 The six fast jets, departed the base on the German-Dutch border at lunchtime and, as a final tribute, flew over a number of the former RAF Germany bases as well as bases of the German Air Force. Their route took them over Laarbruch, Kalkar, Buchel, Norvenich. Wildenrath and one last time over Bruggen itself.

They landed at their new home at Royal Air Force Marham at 1331 hours (UK time) - precisely planned in honour of their squadron number.

Subsequent to the departure of the Tornados, there will be a number of further flights from Bruggen, for logistics purposes. Fixed-wing flying will cease entirely on 1st October. A final unit, 37 Squadron, RAF Regiment, will depart later in that month.

Following the decision in 1996 to withdraw the RAF from Germany and close the last remaining flying bases, the drawdown of RAF Bruggen began in April 1999 when No 17(Fighter) Squadron was disbanded. No 14 Squadron departed for RAF Lossiemouth in January 2001 and No IX (Bomber) Squadron re-located to RAF Marham in July this year. No 37 Squadron, RAF Regiment, will move to RAF Wittering in October.

The airfield at Bruggen closes in October 2001 and, thereafter, the base will not be used for fixed wing aircraft, although the Army Air Corps helicopter unit presently located there will continue to operate. The site will be taken over by elements of the British Army, with the final handover taking place in March 2002. The new Army occupants will be 1 Signal Brigade, comprising 7 and 16 Signals Regiments, 280 Signal Squadron, 63 Vehicle Troop and other units. (RAF Photo)