New MechWarrior 4 Web Page
Microsoft has announced a new "MechWarrior 4: Black Night" web page, complete with new screenshots of the upcoming expansion. The new screens are views of mechs in combat, and they display some of the weapon effects that are featured in the game. "MechWarrior 4: Black Knight" is an expansion for the mech simulation game MechWarrior 4. It will add a variety of new features to the sci-fi combat game, including new mechs, vehicles, and customization options, as well as a new single-player campaign and a number of new multiplayer modes. The expansion will also add a new black market mode where players can trade to get new parts for their mechs. Release Date: Fall 2001

Missile May Be Cause Of Kursk Disaster
THE WASHINGTON TIMES - Russia's military has disclosed details of a high-speed underwater missile that may have been the cause of the Kursk submarine disaster The Shkval-E is identified in a newly published encyclopedia of Russian naval weapons as a "high-velocity underwater missile" capable of sinking surface ships, protecting ports and blocking straits. The missile, which is fired from a torpedo tube, travels underwater at speeds of 200 to 224 miles per hour  three to four times faster than conventional torpedoes. [More...]

Full-Scale Model Of X-47A Pegasus
A full-scale model of Northrop Grumman Corporation's X-47A Pegasus experimental unmanned vehicle, on loan from the company, will be on display at the Naval Air Museum, Patuxent River, Md. The X-47A, built with company funds by Northrop Grumman Integrated Systems, will demonstrate the suitability of autonomous operation from an aircraft carrier. The results of Pegasus flight demonstrations later this year will be used in the company's ongoing work on a naval unmanned combat air vehicle (UCAV-N). 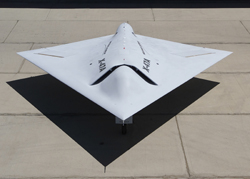 Pegasus received the X-47A designation from the U.S. Air Force in July, shortly before the vehicle was completed. The experimental designation acknowledges Pegasus' significance as a program that will advance challenging aviation concepts.

Under its UCAV-N contract with the Defense Advanced Research Projects Agency (DARPA) and the Navy, Northrop Grumman is performing trade studies, analysis and preliminary design. The goal of the joint DARPA/Navy project is to demonstrate the technical feasibility for a UCAV-N system to effectively and affordably conduct sea-based 21st century suppression of enemy air defenses, strike and surveillance missions within the emerging global command and control architecture.

Northrop Grumman To Develop Lithium-Ion Battery For ASDS
Northrop Grumman Corporation has been awarded a $4 million contract by the US Naval Sea Systems Command (NAVSEA) for the development and integration of lithium-ion battery technology for the US Special Operations Force's new Advanced SEAL Delivery System (ASDS). 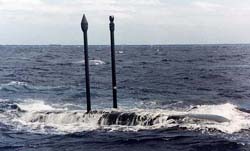 The ASDS is designed and built by Northrop Grumman's Oceanic & Naval Systems business unit. It is a mini-submarine intended to clandestinely carry Navy SEAL teams and their combat gear to and from hostile shores.

This first-of-its-kind system is transported to a mission area atop an attack-class nuclear submarine, or it can be airlifted with its land transport vehicle by C-5 or C-17 aircraft for insertion and deployment to littoral theatres world-wide.

Work on the ASDS battery system is being developed in conjunction with Alliant Techsystems, Inc.

"The emerging lithium-ion battery technology promises a 20- to 40-times improvement in life cycle and reduced operational cost when compared with traditional battery technologies," said Bruce Ballantyne, director of Special Defense and Submersible Programmes for Northrop Grumman. "This technology enables the Navy to expand the types of missions the ASDS can perform."