IL-2 Sturmovik Demo Leaked
As we suspected yesterday, COMBATSIM.COM has learned that the IL-2 Sturmovik demo was accidentally leaked. Since the leak was discovered the demo has already appeared on several sites, including 3DGamers.com and Adrenaline Vault. Oleg Maddox, the game's lead programmer and founder of 1C: Maddox Games, has told everyone on the SimHQ boards that although the demo is not final, it is not the end of the world that it was released. He did ask everyone to read the README carefully. The official demo is expected to be released in a couple of weeks.

New Commandos 2 Screens
Eidos has released new screenshots from their squad-based tactical shooter, "Commandos 2: Men of Courage". The new screenshots show off more of the World War II-era characters and environments that will appear in the game. Commandos 2 is set during World War II and features a variety of locations ranging from a remote Artic camp and a small tropical island to a densely populated European city. Players will control a group of characters with different skills and abilities, and they must complete a series of missions that combine action, strategy, and puzzle elements. Release Date: September 2001.

Saitek X45 Lands In Stores
Saitek Industries has announced that the Saitek X45 Digital Stick and Throttle is now available. The X45 is based on the award-winning X36, the new model comes with a special constant force spring system for smoother control. The X45 more closely resembles an actual cockpit with a covered missile launch button and dramatic backlit A and B buttons on the stick and D button on the throttle. 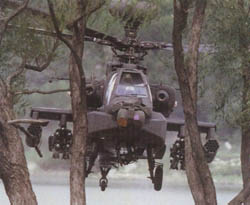 Apache Longbow fulfills a wide range of reconnaissance and combat missions, most without the need to reconfigure ordnance loads and electronic systems between missions. The advanced, multi-mission AH-64D Apache Longbow features fully integrated avionics and weapons plus a state-of-the-art modem that transmits real-time, secure digitized battlefield information to air and ground forces. The Apache Longbow incorporates a series of enhancements that make it more survivable in combat, readily deployable and easier to maintain.

"Delivery of this milestone Apache Longbow to our number-one customer demonstrates our ongoing commitment to equip the U.S. Army with the finest multi-role combat helicopter in the world," said Al Winn, vice president of Apache programs. "We're focused on maintaining and improving the Army's Apache fleet, which will continue to play a key role in global defenses over the next several decades.

Egypt Celebrates Arrival of Latest F-16s
The Egyptian Air Force (EAF) celebrated arrival of its first four F-16s of its sixth F-16 program during ceremonies at Gianaklis Air Base on August 19.

The F-16s were produced earlier this year in the United States and are the first of the 24-aircraft Foreign Military Sales (FMS) program named Peace Vector VI. The aircraft were ferried to Egypt in June and underwent thorough receiving inspections. A total of 10 aircraft have been produced thus far. Four more aircraft will be ferried in early September, and the remainder of the aircraft will be delivered this year and in early 2002.

The Chief of Staff of the Egyptian Air Force commented they were very pleased with the performance and maintainability of their F-16s and that the F-16 was the backbone of EAF's modernization program. He also stated that peace through strength was at the top of Egypt's strategic priorities, and the F-16s are helping to deter aggression and maintain peace in the region.

The EAF already operates similar F-16s and their Fighter Weapons Training School at Gianaklis AB. Egypt received its first F-16s in 1982 and has ordered a total of 220 aircraft, giving them the fourth largest fleet of F-16s in the world.