IL2 Sturmovik Demo Released!
The demo for 1C: Maddox Game's "IL-2 Sturmovik" was released today. There was no formal press release about this demo so we aren't sure whether it's an officially sanctioned demo or not. We've talked to some people at UbiSoft in North America, but no official word yet. The 102 MB demo file first made its appearance on one of the UbiSoft FTP servers in Germany, but is now also being hosted at 3DGamers.com. Here is the demo's README.txt file.

WWII Online v1.2.2 Released
World War II online version 1.2.2 is up and available as an automatic update. This version has been client tested, and should be more stable than 1.2.1, and all but the last blue skies are dead. As well, the long awaited MP40 fix is in 1.2.2, be cautious around German city fightersthey are finally armed and dangerous. The next dev cycle will be an interim release prior to 130. There are a few more stability fixes expected in 125, as well as a few features that are slated for 130.

Matrox G550 Now Shipping
Matrox Graphics Inc. today announced that the new Millennium G550 graphics card is now available in retail. The Millennium G550 DualHead board is an AGP 4X device equipped with 32 MB of fast Double Data Rate (DDR) memory . The board includes an integrated DVI-I output, with true multi-display support for Microsoft Windows 2000 and the latest eDualHead features. The Millennium G550 is based on the Matrox G550's powerful 2D/3D engine, which offers improved 3D performance and explosive Windows desktop acceleration . The 360 MHz UltraSharp RAMDAC pumps out super-crisp 2D image quality at resolutions up to 2048 x1536 at the highest color depths and refresh rates. Retail Value $125 US. 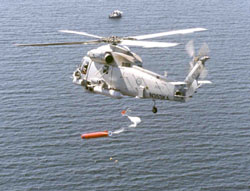 The two aircraft are the initial delivery of five SH-2G(NZ)s that will enter service under the operational command of the Royal New Zealand Navy. The aircraft become part of No. 3 Squadron, Naval Support Flight, based in Auckland at the Royal New Zealand Air Force Base (Whenuapai). Two additional SH-2G(NZ)s are scheduled for shipment in September from Kaman's U.S. headquarters in Bloomfield, Connecticut. Final acceptance of all four aircraft is expected in October following completion of qualification testing. Delivery of the fifth aircraft, which was added to the initial contract of four, is planned for late 2002.

"The new SH-2G(NZ) Super Seasprite helicopters are a significant addition to New Zealand's military capability," Defense Minister Burton said. "For example, in surface surveillance operations, the area searched by a radar fitted helicopter is approximately 10 times as great as that of the ANZAC ship alone. Looking for a survivor in the water as part of a search and rescue mission, the helicopter increases the effective search area by a factor of 100.

The SH-2G(NZ)s will operate aboard the Royal New Zealand Navy's ANZAC and Leander class frigates. The aircraft will perform both surveillance and combat roles with the capability to deploy Maverick missiles, MK-46 torpedoes and depth charges. It also will be able to transport equipment and personnel from ship to shore, carry out medical evacuations, search and rescue missions, and assist with boarding operations.