Crimson Skies Patch ver 1.01 Available!
The Crimson Skies development team has been hard at work to fix the save game bug and they've just released a patch to rectify the problem. Single player saved game status can be inadvertently reset to the first mission by playing multiplayer or by customizing a plane in Instant Action. Once the reset happens, there is no way to recover the lost mission state, short of replaying the Campaign. Crimson Skies Update, Version 1.01, specifically fixes this problem. Download here:Crimson Skies Patch

Panzer General® III: Scorched Earth Ships!
Next chapter in popular wargame franchise ships to retail. Utilizing the 3D engine from Panzer General 3D Assault(tm), Panzer General®: Scorched Earth features four exciting new campaigns an increased number of scenarios and enhanced graphics that combine to put gamers in the thick of the action as either the Soviets or the Germans in the struggle for control of the Eastern Front.

Star Trek: Voyager® Elite Force in Stores!
Star Trek: Voyager® Elite Force hits North American retail stores. Powered by the Quake III: Arena engine and packed with authentic Star Trek® action, Elite Force puts players on the front lines as a member of a new elite fighting force - The Hazard Team. Charged with saving Voyager, her crew and the Delta Quadrant from a threatening alien enemy, gamers must battle against both new and familiar enemies, including the Borg, Klingon, Hirogen and more.

Great Ace of Pacific Succumbs to Heart Attack!
Another part of living history is no longer among us. Saburo Sakai was at a dinner Friday evening, at the Atsugi naval base -- a US base -- and was sitting across the table from some American naval officers. He reached across the table to shake hands, and had a heart attack. He died in a hospital, two hours later. He was buried yesterday; and a memorial service will be held in Tokyo, October 14. A gallant enemy, and later a good friend, he will be missed. 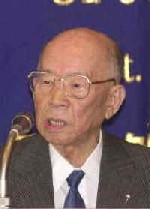 Japan's Top Ace Speaks of V-J Day and Historical Perspective
(from ANN, 08-15-00 -- V-J Day 55) Saburo Sakai, the top surviving Japanese fighter pilot, with 64 destroyed aircraft confirmed, is trying to set the record straight. He has been hearing, and with increasing frequency, that the Japanese military was solely responsible for that country's entry into WWII. Speaking as a military man (Navy), the crystal-sharp 84-year-old former Zero pilot, who lost an eye over Guadalcanal, said at a news conference last week, "We were ordered to go die for victory. Instead, some of us came back alive and defeated, and that's when people began saying that we had started the war ourselves."

He points out that, though several military men were tried as war criminals, the civilian leaders were assumed to have been "rehabilitated" after the war. The ever-venerated Emperor Hirohito was simply exonerated. He thinks the Emperor got off too lightly. "Who gave the orders for that stupid war?" Sakai-san said. "The closer you get to the emperor, the fuzzier everything gets." Sakai-san didn't fall for the in-vogue code of self-sacrifice unto an expected death. "Glorifying death was a mistake. Because I survived I was able to move on and make friends in the U.S. and other countries."

After the war, he sent his daughter, Michiko, to America, to learn English and to understand how the Republic works. She married an American, and now he has American grandchildren. He has also reconciled his warrior spirit with the reality of the pain and horror of war. "I pray every day for the souls of my enemies as well as my comrades," he said. "We all did our best for our respective countries." Source: The Aero-News Network

Xbox Trademark Dispute!
Microsoft may have some trouble trademarking the Xbox name. More details at: Gamasutra

Battle of Britain Demo---Not!
It seems the release of a Battle of Britain Demo was premature! According to Empire Interactive the "demo" that recently surfaced was not intended for public release. Empire Interactive expects to have the "official" high quality demo available by the mid of October 2000. This official demo; unlike the demo found on the web, is compatible with all Windows 95/98/ME based configurations (hopefully!) The demo is also expected to have a multiplayer component.

Pacific War Released!
Matrix Games has released its update to Gary Grigsby's Pacific War. Pacific War: The Matrix Project covers virtually every aspect of the war in the Pacific and includes just about every ship, aircraft, land unit, and important leader that took part in the conflict. Further details at: Matrix Games

New VP6 Motherboard from ABIT!
ABIT has announced the launch of the VP6. This dual processor motherboard is a follow-up to the BP6. The VP6 is an ATX form-factor mainboard designed for use with all PIII Coppermine FC-PGA 370 Processors. It supports all normal industry standard functions, including Advanced Configuration and Power Management Interface (ACPI), AGP 1X/2X/4X and 100/133MHz SDRAM Memory Bus Settings. The VP6 features four 168-pin DIMM sockets supporting up to 2GB memory. For further details on the VP6 go to: ABIT

Inteview with Charles Cook - WWII B-24 pilot!
MiGMan's Combat Diary has posted a heavily illustrated interview article with Charles Cook, a B-24 pilot in the Pacific in WW2. It includes a PDF version for download, many period photos, and screenshots from EAW illustrating some of the combat. They have also posted MP3 audio recordings of Chuck Yeager giving instructions for an early PC flight sim. Go to interview: MiGMan

Crimson Skies Spotted on Store Shelves!
Microsoft today announced that Crimson Skies, a new action/adventure game for the PC, has started to appear on store shelves. There have been several reports of its availability at locations throughout the United States, and full domestic distribution is expected later this month.