So...youre a hotshot pilot and youve been flying and driving the most complicated sims available for a while now. You can tell an AWACS from a T-72M at five miles, but now you have this Flanker in your HUD , on his tail and youre gonna go guns on him. Suddenly a missile streaks off his wing straight to you sending your F-22 plunging to earth in a fireball..directly behind him, dropped chaff\flares, jinked, ECM on..what happened? Is this a new weapon I had not heard of before?

The above scenario is one that could happen for real in as little as three years from now. Why? Well, combat aircraft are ultimately just a platform for the missiles and bombs that actually do the job. To illustrate my point, the Romanian Airforce was recently offered the F-16, F-18 and Mig-29, but instead they chose the Israelis offer to upgrade the avionics, sensors and weapons. The F-22, its best A\A weapon is the same AMRAAM that is found on a Harrier or a Humvee (new test program). Surprised? Dont be, just remember what your mom always told you: its whats inside that counts most, and this applies very well to combat aircraft as well as relationships! So, you say, why then is everyone getting all wrapped up about the F-22? Well, people understand jets better than the weapons they carry, they have more sex appeal, and you cant go for a ride on even the best bomb (unless youre in a Shwarzeneger flick). The USAF is happy about the F-22 because it means the AMRAAMs and JDAMs onboard can be launched from the most beneficial position without getting the pilot killed.

With all this in mind, my articles will cover the new (after Dstorm) missiles, bombs and a few noteworthy aircraft upgrades that have not yet made an appearance in sims. Are you familiar with DRM, EFOG-M and GREEN FLAG? You will be! Projects like these will change air and land combat and our sims in ways you never imagined.

We should start out with the simplest of the new A\G weapons, but first we should discuss the limitations of the famous laser smart bombs, and why they might not be as effective in the next wars as in DS. We all know that the whole principal of it requires someone to :1) visually see the target 2) be close enough to shine a laser on the impact point 3) have your laser collimated to the reticule 4) be steady while you illuminate the target 5) illuminate no higher than 20,000ft (max alt of most laser systems) 6) acquire the illumination if you are only dropping 7) release the bomb less than 1 minute from target (batteries), sometimes in a steep dive 8) have a low threat area with no SAMs or heavy AAA and total air superiority

As you can see this is a tall order for a pilot facing less than ideal conditions. As for the benefits over iron bombs and current weapons: -you can stick the guidance on just about anything that will go bang- 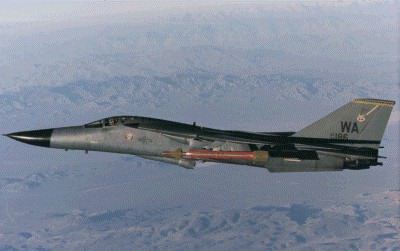 It costs less than doing the same job with iron bombs  its incredibly accurate- its flexible towards new tactics. The GBU-28 was a 4700lb laser bomb (shown left) was developed in record time DURING the DS air war from mid-Jan to Feb 27 when it was dropped on bunkers at an airbase just north of Baghdad. It is 18 feet long, made from artillery barrels, uses 650lbs of Tritonal, and is five times more destructive than a GBU-27 2000lb . It was dropped by the F-111F and was later approved for the F-15E, and an updated JDAM version has been dropped from the B-2 Spirit. In tests it would go over 100ft deep after concrete slabs. If this program was done during peacetime, instead of >2months, it would have taken over two years to field the weapon.

As for the flexibility of LGBs, the commanders were distressed that the B-52 strikes on armor formations were not killing much armor, they suddenly started using LGBs to plink tanks. This was cheaper than using Mavericks, and its better to save the Mavs for the ground war CAS. Often, a flight coming from a strike mission would return with ordnance due to clouds over the target, then get redirected to kill tanks before returning (200 tanks per day). As for ground forces illuminating the targets for you, this is more problematic, since it is harder for the bomber to locate the target initially and the reflection is not as easily seen by the seeker.

So what is the future of the LGB? Well, the UK has started a program nicknamed the "terrorist" or "peace" bomb. This takes an inert LGB training device (steel tube with the fins and seeker bolted on) and ads a 7kg non-fragmented HE charge to the tail. This allows special forces the ability to kill terrs in a room next to where the hostages are kept, provide a big distraction (!) right in the middle of your city, with minimal damage. The same effect could be had using laser Hellfires, provided you modified the warhead so the shaped charge is gone (or the blast would travel through three or four concrete walls). 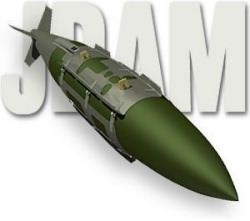 This is the Joint Direct Attack Munition, effectively a GPS\INS bomb for attacking fixed hard targets under any conditions. This is one of two primary A\G weapons for the F-22, (the other being LOCAAS). Once the plane is in range of the target he drops the bomb and turns away from the target area to avoid surface threats. The drop can be as far away as 15 miles (normally 5), hit less than 13 meters, and it comes in 500 and 2000lb sizes with a few 1000lb high energy versions for the F-22 (these do as much as a 2000lb).

It will cost about $18,000 for the guidance unit, with a lifetime warranty. This weapon can be dropped in clouded and bad weather with no performance loss and little effort from the pilot, being a fire-forget weapon. An improved version will hit closer than 3 meters. It is in production now, and will arm almost all jets which carry bombs now. Copies of this weapon are being developed in UK, CIS, China and France, who want to add a rocket to the tail for an increased standoff. The F-22 version may get an inflatable nose, in order to fit as much punch into the internal bays of the plane. 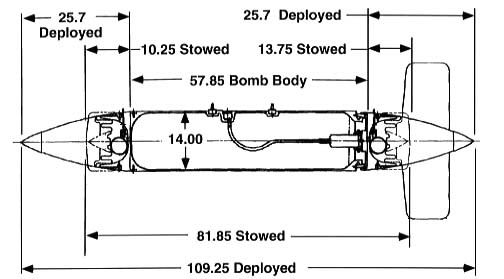 This is the Miniaturized Munitions Technology Demonstrator. It is a specialized weapon, similar to the JDAM but optimized for internal bays of stealth planes. It will be 250lb, penetrate 6 feet of concrete and detonate 50lbs of explosives. The explosives are being developed right now to provide 5 times the power of current bombs. Between 6 to 8could be carried inside the F-22s bays. In order to penetrate well, the bomb must be traveling quite fast (1100fps) and have a good auto-pilot to retain energy. These weapons are being developed with the JSF and UCAV programs in mind. 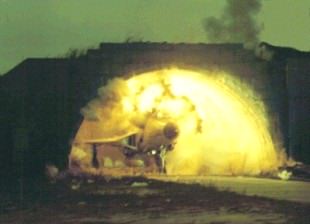 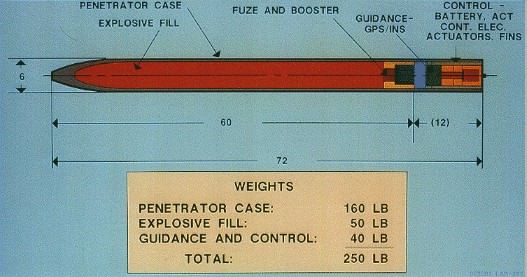 The British toss-bombing tactics would seem to be an effective way to employ these weapons, from any altitude. 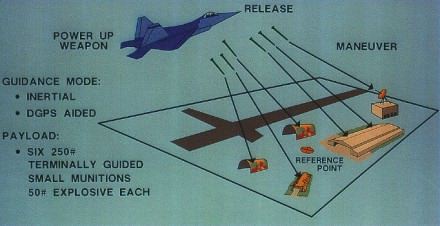 Part II will be posted on the weekend, covering: