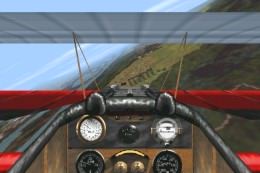 In late January Rowan released an incredible WWI simulation with a new graphics engine and some of the best force flight models yet designed. However, for some would be pilots with older equipment, the graphics engine was too demanding. Rowan later released an update for 3d hardware that INCLUDED Force FX support. For a review of the original see Flying Corps. For a review of the patched version see FC 3d. Flying Corps Gold adds support for Direct 3d (any 3d accelerator running in WIN95), a mission editor, enhanced AI, a new aircraft and a new campaign. You can even share the missions you design with other players. The graphical difference IN SIM over the original release is simply stunning. Don't let the shots fool you, however, it really is this BEAUTIFUL. The feeling I get in sim is reminiscient of my early days in EF2000, but of course even in version 2 it didn't look THIS real. When I first saw the 3d patched version of Flying Corps I had a hard time convincing myself that graphics had finally achieved so much.

A Room with a View 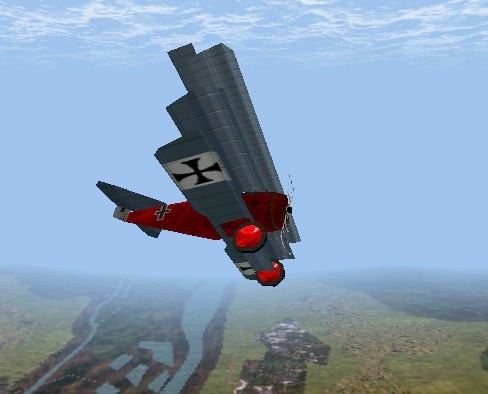 Note the shading under the wings and the light sourcing effect on the fuselage..

Its quite amazing how much difference light source shading makes on the aircraft in Flying Corps Gold. FC 3d had some of most impressive terrain visuals anywhere, and the sky and fog matched well. But the aircraft looked like last generation graphics in next generation surroundings. Well, no more! The shading means that as your aircraft turns shadows and color depth is relative to the light source. New underwing textures add dramatically to the effect. The aircraft now fit the quality of their surroundings.

Force feedback support was also added to 1.10. Once in the sim you can access the joystick menu to select the FORCE FX. Having done this you will calibrate the stick then go back to the main menu. From the new preferences menu (the one that shows the cake with the CHERRY on top...!) you may choose to ENABLE or DISABLE stick stiffness. With Force FX support enabled, stall and buffet effects will be transferred back to your stick. The stick will also reflect dynamic pressure and control surface deflection changes.In the beta I have machine gun recoil is also present, but not engine vibration. Perhaps this may yet show up.

As above, another screen of configuration options has been added:

From the Dweeb to the Devotee

In my original FC review I noted that there were a couple of AI tweaks needed. Rowan has gone ahead with these changes in the patch, and AI aircraft no longer spin as readily, nor do they plow into the ground so often when descending in a turning fight. These changes may seem subtle, but they will put the fight on a new footing for many pilots who had learned to take advantage of these weaknesses when pressed.

One of the beauties of this simulation is that it is accessible to the novice and challenging for the serious pilot. For the benefit of novices, each aircraft has its own dual modelling: a realistic option and a training option. Less experienced pilots may disable spins, as well as torque, wind, gyroscope and slipstream effects. If you don't have rudder pedals you can choose an option to compensate (but this is really a compromise and if you want to survive at higher levels of realism you MUST add rudders to your setup).

If you really are a novice, you can set enemy AI to the novice level and plan to survive a bit longer! You may also select the size of the hit bubble: from small to medium to large. When set on large you only have to get your bullets near to the chosen target in order to score a hit. This is really a large plus for those who are only beginning to train in flight.

Along these same lines, there is additional information available on screen for those who require it. Along the top of the screen, status information as well as nav info is available if selected. At its lowest level of information the status bar includes a stall indicator that changes from green to yellow to red to warn of impending stall. This display bar will even output threat warnings! While in padlock mode the nearest threat is identified with distance in meters, and compass bearing. Ditto for the nearest friendly or nearest ground target, and of course you can cycle through these. This works quite nicely and is very unobtrusive, and it can be argued that it compensates nicely for the limitations of monitor resolution and the real life Mk.I eyeball. So don't feel too guilty for using it.

Just how advanced is this flight model, you ask? Take the famous Sopwith Camel as an example. You need to pull back on the stick to turn hard right because of the gyro effects. It will correctly only snap roll in one direction(left).

Moreover, the Camel has a shifting center of gravity. At the beginning of a patrol, forward pressure was needed on the stick to avoid climbing. Later in the flight the fuel used would result in the CoG position changing and so the aircraft could be flown "Hands Off". (It would have been nice had Rowan included a cheat key for trim; with the F22 Pro pulling back constantly on the stick is a good job for Arnold Shwarznegger). Of course, aircraft will stall and spin. And it is possible to steer the aircraft on the ground using aileron (due to adverse yaw effect) as well as rudder.

Okay, so what is the new sim like? With these numerous tweaks both feel and execution have changed significantly over the original release. First, terrain detail has now made it a bit easier to spot aircraft at a distance, and if you are flying high above the ground looking down for those sneaky scouts they are also easier to spot. Second, the feel and execution of flight is quite different. You may go streaking past an aircraft where before it would have passed you by more slowly. You'll find that dogfights feel quite different.

I believe that Rowan also tweaked the g modelling. Red out and black out are now more noticeable. I used to get away with some serious gs without much effect, but I can no longer do this. If you pull heavy gs you are NOT going to be able to see what you are doing. Course, do this too much in these airframes and you will shed your wings anyway....!

Airframe jitter on landing and jitter in the flak fields has been added. Nice effect and definitely adds to the realism. Add to this some FORCE FX output and this really is pretty close to sim heaven. I no longer feel the pain of waiting for RB II!