Perhaps the first commercial man-to-man WW II game was SSIs Computer Ambush. Apple II owners had the unbelievable experience of leading members of his squad, represented by uppercase letters, against Germans, represented by lower case letters, around on a grid that could either be green or amber. Squad members could carry different weapons and were rated for abilities such as strength, morale, marksmanship and movement. Movement and combat commands were given through hot keys and a command line.

Turn-based WWII man-to-man combat games languished after that. Space games such as Space Hulk, Breach and especially X-Com advanced the man-to-man genre through improvements in graphics and interface but years would go by before serious attempts were made to translate these systems to WWII scenarios. SSIs Soldiers at War and Empires 101st Airborne finally picked up the torch; reception by the user community, however, was ho-hum at best. The former suffered from weak AI, clumsy mechanics and missions out of a comic book instead of real combat. The latter was released buggy with slow game play; subsequent patches did not overcome the initial bad impression.

Hasbro is making a stab at creating a popular turn-based man-to-man game by lending the title to one of the most revered board games, Squad Leader, to the newest entry in the genre. The new Squad Leader attempts to show the down-and-dirty side of combat with ordinary men doing the horrible usual tasks of war. In doing so, the game has three pre-set campaigns: the Americans start out on the Normandy beaches and slog through to St. Lo, British paratroopers battle in the hell of Arnhem while German troops are the dice Hitler cast at his Ardennes gamble. Generators for do-your-own campaigns and scenarios will be in the final version.

Players have a set number of five-man squads and specialists such as leaders, medics, radio operators, engineers and weapon teams, per mission. They can choose from eight squads, although the choice of specialists in the campaigns is limited. 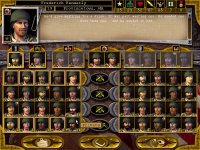 Every man's history and abilities are on the squad selection screen.


Individual soldiers are not only rated for marksmanship, health, morale, initiative and leadership but also have unique biographies that may affect their performance. The combination of attributes fixes the number of action points per move. These attributes can improve or degrade from mission to mission  if the soldier survives.

Squads start with typical weapon load-outs but missions may call for more specialized gear. Equipment can be changed in the squad equipment screen and men can have different weapons, load up on grenades and explosives. 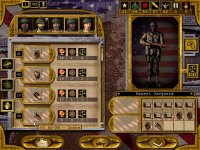 Squads can be equipped with lots of gear.


Before images of super squads armed with the best grabs the imagination, be aware that the choice is limited to what supply can actually provide. For instance, dont expect more than one BAR per mission.