The "flight model", if you can call it that, is pretty much the same as previous space sims. The standard pitch, yaw, and roll controls are supplemented by the ability to strafe left/right using small thrusters in Starlancer. In single player games, we haven't found a whole lot of use for this added axis of movement, but in multiplayer deathmatch games strafing will probably be a great way to shake somebody off your six. 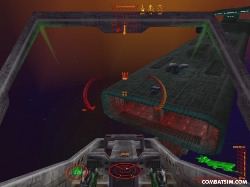 The weapons in Starlancer are the typical energy/projectile guns combined with various missiles and countermeasures. There are some new types of missiles available, such as an EMP missile that disable the targeted ship's systems with a very nicely done visual shockwave effect. Overall the offensive and defensive systems are par for the course in relation to previous space sims, and Starlancer really only offers better visual effects in the gun/missile department when compared to its predecessors. 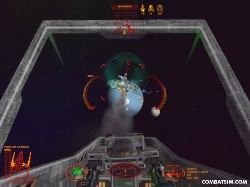 The view system will be old hat to most players familiar with this genre. The ability to switch off the cockpit as well as fly from third person is available, and all the standard left/right/aft views are included. 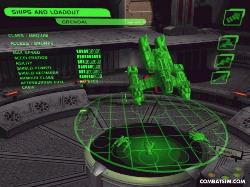 There are two main features where Starlancer has shown significant improvement over previous titles. The first is the interactive ship environments. The player can navigate the inside of the command ship in a 3-D walkabout environment, and this interface not only looks great, it is very fluid as well as easy to use. The second feature that has impressed us so far is the amount of AI controlled ship activity. There are an awful lot of ships in each battle, and they all have objectives of their own, and we've enjoyed watching the capitol ships beat the crap out of each other with large gun batteries and torpedoes. The flak in the "air" gets pretty thick when flying near capitol ships, and a hit or two from a cap ship will usually destroy any of the fighters. Space combat sim fans that enjoy the large battles depicted on television series' such as Deep Space Nine or Babylon 5 will love the balance struck between capitol ships and fighters in Starlancer's large battles. You feel very much like an insect buzzing around a slow, angry giant when capitol ships become involved in your engagements, and if you are even the slightest bit negligent you'll be a splat on the windshield.

Once we complete more of the single player missions, as well as try out the multiplayer features, we'll have Part II of our Starlancer Preview completed. Until then, our first impression is that Starlancer is an old dog that has been taught a lot of new tricks. The things that made previous space sims so successful are still included in Starlancer, and other than updated visual effects and graphics, things haven't changed a whole lot. The multiplayer capability, so long as it works, is the main feature that will make Starlancer an enjoyable space game for combat simulation gamers. The ability to play the entire campaign with four other players via a Lan or on Microsoft's Gaming Zone should be a lot of fun, not to mention a nice break from more complicated simulations.