by Len Hjalmarson and Neil Mouneimne

know, a gaming journalist should strive for objectivity. We should be able to play the cutting edge sims and cooly report the good, the bad, and the ugly.

Maybe, and maybe not! But I can't keep my cool about this venture between Activision and Parsoft, and when you are finished the first part of this interview, you'll likely be as excited as I am.

FS: SDOE depicts three unique scenarios from WWII: the English Channel, Rhineland and Northern African theaters. Choosing from nine different planes, including the Lockheed P-38 Lightning, the Focke-Wulf Fw.190 F-8 and the Messerschmidt ME-262  the first jet fighter on earth. But enough from me, lets hear from Parsoft on their new baby. 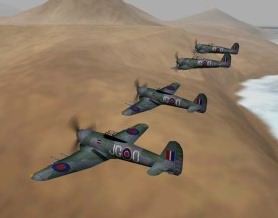 Csim: Tell us a little about the history of Parsoft Interactive.

Parsoft: My interest in flight simulation started in childhood. A flight simulation of some sort would eventually appear on whichever computer I had access to. In the early days, these flight simulators used simple ASCII characters to represent the runway, and updated a single frame at a time in response to control inputs from the keyboard. The real challenge came in the late 80s when I had access to expensive, high power workstations. Despite adequate processing power, the slow graphics bus found in many of these machines meant they were unable to smoothly render even simple 3D geometries with flat-shaded polygons. This was really the beginning of Parsoft.

Working at home after work, I developed a new graphics engine, which was then used in our first game Hellcats over the Pacific. This game was actually developed on a Tektronix 4317, but it was a simple matter to port the code over to the Macintosh. (A friend from school, Mike Bunnell, and I had actually written the first useable C compiler for the Macintosh - Megamax C). Hellcats was the first commercial release from Parsoft, and was the launch vehicle for the company as it is today.

Csim: What kind of influence does your experience making MacOS games bring to the new Win 95 simulations?

Parsoft: In terms of content, there really is no difference between developing a game for the Mac or the PC. The expectation level of the gamers is the same on both platforms, and drives the feature set that we implement for each new title. This implementation however, has been significantly facilitated on the PC by Win 95. Although we had planned to develop titles for the PC for some time, Win 95 was definitely the greatest single factor in making this transition happen. There were definitely some issues that worried us, particularly performance, but in the end the benefits far outweighed any concerns we had initially.

Some claim that the Mac is too proprietary and that this confines developers to the specific methodologies defined by Apple. In fact, making games for MacOS is actually quite simple - the structure is there if you need it, but you can always go the custom route if you want to. If you choose to ignore the conventions defined by Apple, then compatibility with new hardware and software cannot be guaranteed. This is effectively what Win 95 has introduced to the PC world.

Csim: A-10 Cuba! was a surprising work for a first foray into the PC simulation world. You must be quite proud of it. How did it come to pass?

Parsoft: A-10 Cuba! was the second title in the A-10 series. It was a fully-featured game that we developed in response to feedback from users who found that A-10 Attack! was too complicated. Although we improved the graphics, and added a few more features, the major changes included a simplified UI, and the networking. As you suggest, we were very proud of it, especially the network play.

Csim: If I have my math right the name for this simulation has gone through three evolutions. Is there a story to tell there?

Once we announced the new name we got quite a bit of feedback from the UseNet community that it wasnt descriptive enough, that it didnt sound enough like a flight sim. So we changed it to "Fighter Squadron: the Screamin Demons over Europe," because "Fighter Squadron" reflects the squadron-based nature of the game.

Csim: Parsoft has a remarkable reputation of simulating real-world physics, both in flight models and even in such esoteria as landing-gear and belly landing physics. How will this experience be reflected in Fighter Squadron?

Parsoft: Itll be even better! In the past we were forced to do all the physics with integer mathematics because we couldnt be sure all the computers would have floating point capability. Now we dont have to do that. With the floating point coprocessor there is enough precision to accurately simulate an extremely large range of forces and dimensions without the code contortions required when floating point is absent. In FS:SDOE were modeling characteristics such as gun recoil, ordnance and landing gear drag, lift and drag of multiple parts of the fuselage, stabilizers, wings, engines, etc.

Csim: FS:SDOE's graphical detail represents a real departure from the simplistic graphics of Parsoft's earlier works. Tell us about this new graphics engine and the artwork we'll see. 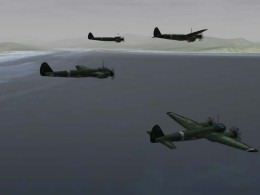 Parsoft: We've spent over a year designing this graphics engine, which we call G3, completely from scratch. In an effort to really take sims to a new level, we haven't reused any previous engine code. Instead, we have taken a more modular, open approach to designing the engine. Because not everyone who buys the game will have a 3D accelerator card, we wanted to make sure that the game would still run at a high frame rate and with similar options on both a 3D accelerated and a software-only system.

The engine supports almost all the features of a 3D card, and it does so in both software and hardware. The engine does perspective corrected texture-mapping, true per-pixel fog and haze, bilinear texture filtering, and true software z-buffering in both software in hardware. Hardware version can run in up to 24 bit color at fast frame rates, while the software version does 8 bit color with all of these features.

What this means for the user: No more static cockpit views, as the user can place the camera anywhere. No more sorting error, because the software z-buffer makes sure that every pixel is drawn correctly. Texture filtering means no more jaggy, pixelated texture maps on the ground. Perspective corrected mapping allows you to pan around the cockpit, for example, and still read all of the instruments.

The artwork looks great! In addition to fully textured models, we have great looking ground and sky, which we do with a special supertexture. Also, we aren't texture memory limited in the way that most sims are, so we can really get great detail on the planes, including allegiance markings, and really fine details, like the rivets on the cockpit.

Csim: What kind of frame rate can we expect under 3dfx hardware?

Parsoft: Were targeting 30 fps in 640x480 high color on the 3dfx card. Were also getting acceleration with MMX (including the Pentium II), so far getting up to 25% faster frame rates in addition to the 3D cards. On top of that, we have separate optimizations for the Pentium and Pentium Pro  were actually compiling code for them separately to get best performance. 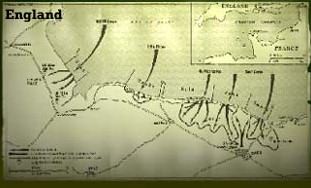 Parsoft: With Fighter Squadron, weve paid more attention to sound and sound effects than in either A-10 Cuba! or A-10 Attack! There are many different sounds in the simulation portion of the game, all sampled with the same kind of realism that you heard in Cuba! In fact, each aircraft has its own custom sounds. In addition, the shell features a "radio" mode that simulates 1940s radio broadcasts from the BBC, the Armed Forces Radio Services (AFRS), and German radio. Players will also be able to add their own sounds or change the sounds to their satisfaction.

Jeehun Hwang, who did the music for MechWarrior 2, MechWarrior 2: Mercenaries, and several other Activision games, is on board as a composer, and he has been turning out some beautiful 1940s period music that really sets the tone for the game. Doppler effects are also in the game. 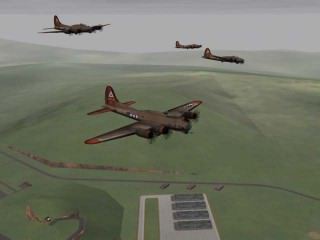 Csim: A-10 Cuba! was also impressive in representing aircraft damage. Can you give us some kind of feel for how damage effects and resolution will work in FS:SDOE?

Parsoft: Fighter Squadron really takes Cubas damage model to a whole new plane since damage is determined on a per-polygon basis. To the game engine, the planes, tanks and other vehicles are collections of objects joined together. When a piece is damaged and breaks off, the engine re-calculates the center of gravity, mass distribution and other factors and the vehicle behaves differently. The engine also calculates physics for the piece which broke off, so it continues to exist  you can even crash into it. In this way, both the air and the ground vehicles are alive in the world, and will never take damage in quite the same way in each mission, even when hit by artillery or rocket fire.

The 1997 crop of sims this year is not only technically impressive, but one of the key themes is that they're trying all kinds of new ideas to differentiate themselves from each other in some way. How is Fighter Squadron setting itself apart from what we've come to expect from combat simulations?

In addition to the physics and collision detection, this project is different from any simulator to date in the way that it is open. First, the game features the OpenPlane interface, which will allow users to build their own planes and fly them in the game, trade them over the Internet, and create crazy scenarios which wouldnt happen in real life, such as having a World War I tri-plane battling an Me-262 jet. Second, the inclusion of an easy-to-use, drag-and-drop mission editor means that players will be able to create missions, or even simulate a particular campaign that they like. Third, we have an open architecture that allows us to easily support multiple 3D accelerator cards, and even add new cards as they are released without patching the executable. Finally, we opened up as much of the game as possible to the end user, allowing him or her to swap out sounds, mugshots, etc. so that users can tweak the game to their particular liking.

Csim: We've heard that the selection of aircraft to fly in the game is rather atypical. What aircraft will we see and why were these particular craft chosen?

Parsoft: We wouldnt characterize the plane choices as atypical; we picked planes that we thought would be fun! OpenPlane allows more advanced users to build other planes that they want in the game. 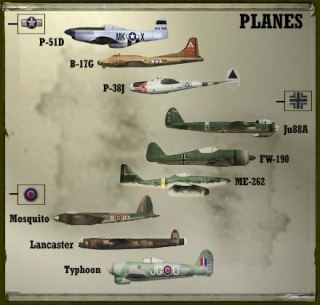 One of the biggest grievances players had with A-10 Cuba! was its small number of missions and lack of expandability. How will Fighter Squadron address this issue?

We believe Fighter Squadron will be the most expandable flight sim ever. The game itself will ship with 30 unique scenarios comprising over 200 individual missions over the English Channel, North Africa, and the German Rhineland. Were also shipping a mission editor which will enable people to create their own scenarios and missions. Since theres no difference between a single player and multiplayer scenario, any scenario that gets created can be used for both single player and multiplayer. The combination of the mission editor and OpenPlane means people will be able to play this sim for a long time.

Go to the Parsoft FS: SDOE web site, the best commercial site I have yet seen dedicated to a single simulation: FS: SDOE Hangar