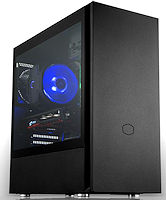 It’s time to check out the new Cooler Master Silencio S600 mid-tower PC chassis. CM released many new cases recently, including the Masterbox Q500L and the NR600, which we reviewed on Guru3d in May and June respectively. I’ve mentioned the latter on purpose, as the Silencio S600, which is the hero of this test, is very, very similar in overall design to the NR600. The case was announced in mid-June. As the name of the series suggests, it should be a silent chassis, and it comes with several design elements that minimize noise pollution. There’s a soundproofing internal lining, a light frame, and several anti-vibration pads inside. If the external design is sober and consistent with such staples of the Silencio family as e.g. an SD card reader on the I/O panel, then the internal layout has evolved. It’s been adapted to meet modern standards in terms of gaming chassis design and water-cooling compatibility.