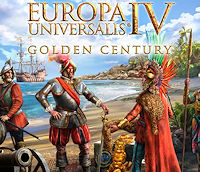 Plus Ultra: Rival the Empire of Charles V in Golden Century

From Madrid to Mexico to Manila, the Spanish Crown had the one of the first empires where the sun never set. From the fall of Granada to the Dutch Wars of Independence, Spanish power always had to be taken into consideration. But its road to dominance ran through local rivals like Portugal and Morocco, and its control over the vital sea routes was challenged by English navies and ruthless privateers. What path will you take?

Europa Universalis IV: Golden Century is the newest immersion pack for Paradox’s classic game of empire and exploration in the early modern era, and it is available today on Steam, the Paradox store and other major online retailers for $9.99 / £7,15 / €9,99.

Golden Century focuses its improvements on parts of the game central to the kingdoms of and around Iberia,including new mission trees for the major historical powers and a hypothetical Andalusia if you manage to turn back the armies of Catholicism. But Golden Century also lets you live out your childhood dream of being a pirate king, ruling a republic of brigands, sending your ships to finance realm by raiding the trade routes of more powerful rulers.

Other features of Europa Universalis IV: Golden Century include:

Golden Century is accompanied by the free Spain update, available to everyone who owns Europa Universalis IV. This update will include newly detailed maps of Iberia, North Africa and the Spanish Main, as well as revised National Ideas for many nations in the Western Mediterranean, new Government Reform options and other changes for all players.