Home Archive Forum About
Let There Be Light: How a Film on PTSD Worried the Army
Posted February 8, 2017 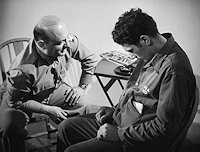 John Huston entered the U.S. Army in 1942 with distinctive credentials. In the previous two years, he had directed three hit films, including The Maltese Falcon starring Humphrey Bogart, which garnered an Academy Award nomination for Huston’s adapted screenplay. The army put his cinematic talents to good use. Major Huston filmed two ambitious documentaries for the Army Signal Corps in the next three years—one on army life in the Aleutian Islands, the other about the fighting near San Pietro, Italy.

Now, he had a new assignment. As the war in Europe wound down and American forces approached the Japanese home islands, the army wanted to document the medical treatment of battle fatigue casualties evacuated back to the United States. Because the condition—an acute nervous reaction to the stresses of combat—had received little publicity during the war, the army feared that those affected would be “misunderstood, mistreated, and looked upon with suspicion” when they were discharged into the civilian workforce. It wanted to reassure the public, especially employers, that those former servicemen were not dangerous and could function as well as the next man.