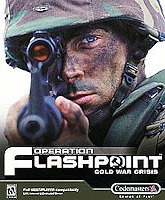 A new video from GVMERS is a documentary on the “rise and fall” of Operation Flashpoint: Cold War Crisis, Bohemia Interactive’s debut military first-person shooter. The video discusses the breakthrough nature of the game, conflicts between Bohemia Interactive and publisher Codemasters, and how this eventually led to Arma, the spiritual successor to OpFlashpoint that soldiers on to this day. Here’s a bit:

In 1997, a video game company named Bohemia Interactive was established in Prague. The Czech Republic had historically never been a hotbed for video game development, but Bohemia’s founders – Marek Španěl, Ondřej Španěl, and Slavomír Pavlíček – were on a mission. They were determined to create a first person shooter that would capture the reality of war more accurately than any game before it; an engrossing simulation that would depict what real battlefields were like, and feature an unprecedented sense of scale and attention to detail.