So, you think youve reached the pinnacle of the whirly-nosed flight sim heap. Theres not an AI bandit in existence that can perforate you. Youre unbreakable in EAW. Youre invincible in Janes WWII Fighters. Its true that the AI aircraft in CFS & CFS2 can be out-flown by a hamster, but youve torn into these like a well-trained, genetically altered battle hamster. B-17 II is too much of a role-playing exercise, and Battle of Britain is still over in the UK, out of your reach.

Flush with lame excuses like my wife wont let me or Im getting a frontal lobotomy in the morning, your tired-of-getting-their-tails-waxed buddies wont even TCP/IP or LAN with you anymore. There are no more challenges, right?

Wrong-O, Ace Boy. A session of HiTech Creations Aces High massive-multiplayer flight combat sim will quickly show you how good you arent, because getting the hang of this monster is hard. Oh, did I mention that you have to pay to be humbled? 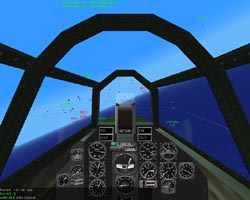 Into the breech: Hunting around task forces can be hazardous to your health


Getting Into ItYour journey into humility begins simply enoughno trip to your neighborhood software purveyor is necessary. The Aces High executable file is available as a free download at http://www.hitechcreations.com. The downloading and installation of Aces High is made as painless and snag-free as youll find anywhere. Download the reasonably sized 14MB file, and run it. Simple.

After choosing your video options (the optional high-resolution patch is no longer required for versions after 1.05) and color density, youll need to program your controllers. As all modern flight sims should dobut shamefully often dontAces High recognizes multiple controllers. In fact, Aces High has one of the most powerful in-game controller setup screens out there, and is a near-miracle for those of us using USB hardware. Multiple stick-mapping levels and axes with scalable gains and dead-bands are among the very trick features supported. 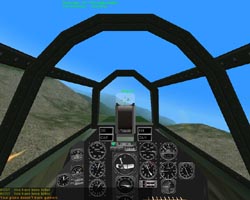 A drone meets its end. Note the smoke trail from the tracers.


14 Day Free Trial!OK, now that your sticks are set up, its time to sign your life away and create a Login. Actually, HiTech Creations offers a two-week free trial to new subscribers, so its not as bad as all of that. Also, whether you are an active subscriber or not, Aces High offers two modes as gimmes. Theres an Offline mode, which is great for getting a feel of the aircraft as you take potshots at non-manuevering drone aircraft circling your airfield. An H2H mode in which you can play via TCP/IP against up to eight of your reluctant buddies is also available. The Offline and H2H modes can be played anytime, free of charge, no salesman will call. Sticking to these modes only in such a sim as Aces High is somewhat like using a Ferrari 360 Spider exclusively for fetching the groceries, however, and will therefore and henceforth be ignored.

Once you are satisfactorily rigged up for flight, a click on the Online button brings up a list of available arenas. This list includes a Training Arena, where designated Aces High instructors can teach newbies the ropes of this hostile online world. Did I take any instructors up on this? No, but then again, Im a cocky idiot. If you are new to combat flight sims with hardcore flight & weapons modeling, it may be a good idea to set up an appointment with these people as its a rough world in the actual main arenas. Newbies can quickly become frustrated. 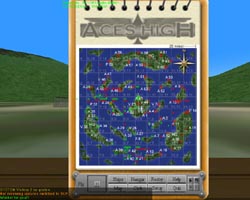 Your guide to fun. Rand-McNally, it aint.


My Name is GladiatorOnce you have selected your arena, you are put into a tower located on an airfield with your new best friend, a clipboard. This clipboard is the primary interface through all of Aces High, serving as map, scorecard, selection sheet, and just about everything else. The default mode of your clipboard is the map, and can be zoomed and minimized as needed. From here you may select your country from three eternal antagonists named for chess pieces: Bishops, Rooks, and Knights. The map is divided into 100 sectors, each representing 25 square miles. Provided that your selected countrys radar system and/or headquarters havent been disabled, you should see small colored horizontal bars within some sectors. These bars indicate the balance of power between aggressors within the disputed sectors. Small dots indicate the actual positions of friendly and hostile aircraft---a feature that you will sorely miss if your local airfield radar or, even worse, your countrys headquarters is destroyed. Realistic? Not even. Remember, however, that you are paying for this, and think about how pissed off youd be if you spent half of you online time trying to find a bad guy to shoot at. Locate to an airfield where there is action nearby, and lets go fly. 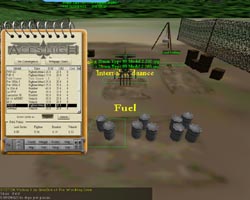 
Stabbing at the Hangar button puts you in front of your prospective mount, and what a plethora there is. As of version 1.05 Patch 3, there are 29 flyable aircraft in Aces High including fighters, fighter/bombers (or Jabos in Aces High parlance), heavy bombers, and even transports. Each has a specific role in the big strategic picture of the Aces High universe. The role of fighters is obvious enough, whether as tools of air superiority or escort. Jabos often take on a tactical role, suppressing triple-A batteries or targeting specific structures. Heavy bombers such as the Lancaster and B-17 rain down destruction from on high, while either a human crew of gunners or a harried individual (you, as you cycle crazily through the different stations) staves off attacks by firing from the turrets. 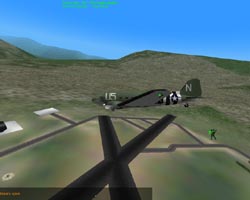 
The lone transport of the bunch---the C-47 Skytrain---is charged with delivering paratroops (or Goons in Aces High lingo) to enemy airfields. When enough Goons survive the drop or landing assault and take the fields map room, the field is captured. The C-47, as important as it is in the big scheme, is also the only unarmed aircraft in Aces High. Being caught by an enemy patrol over open water as part of a lightly escorted Goon flight, for lack of a better word, sucks. There are just not many options available except to watch your low & slow buddies get cut to pieces, and wait your turn. War is, indeed, hell. 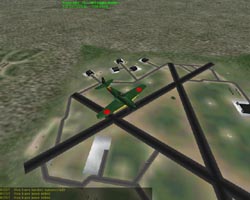 This is my friend. I will call him George.


Aircraft, Aircraft, AircraftNew aircraft types are added all the time, and alongside the pedestrian old standbys like Lightnings and Me-109 variants there are some WWII-era aircraft that you just wont see elsewhere. These usually unsung mounts include two different Macchi fighters and my personal favorite all-around mount, the Kawanishi N1K2-J Shiden, known by the allies as a George. The range and depth of choice is awesome. 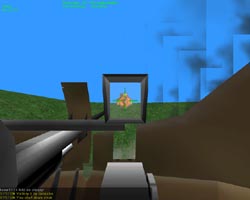 A Spitfire takes a face shot from an Ostwind. Ground vehicles are a fun diversion. Note the square smoke (video weirdness at times)


Land and SeaYou also notice that there are four vehicles and even a boat available in Aces High. The triple-A tracked vehicles and the panzer can prove to be interesting diversions, as the brand new P.T. boat is. Sometimes its a hoot to drive out a ways and park on the outskirts of your besieged airfield and blast away at incoming attackers. The occasional Panzer attack on an enemy vehicle park or airfield can also be fun, especially when coordinated with others. The P.T. boat, a new add-on to the Aces High universe, is available when tooling around with a carrier group. Positions aboard the battleships even allow players to man their massive 16-inch guns. I spoke to HiTech Creations about these seemingly unrelated add-ons, and was told basically what I thought to be the case. These are fun extensions of the sim, for sure, and more non-aircraft vehicles will be added. I was asured, however, that Aces High is and always will be first and foremost a flight sim. Im glad to hear it, personally. There is far too little focus these days, and mission creep can foul a sim beyond recognition. 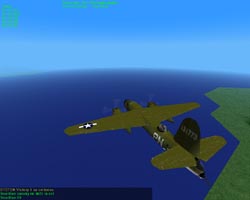 
From the Hangar, you can load up fuel and weapons stores---even set the convergence point for the guns! The ability to tweak the convergence point is a very powerful tool, and one that is best left to experience as it is more an art and personal preference setting than solid science. Care must be taken not to overload your aircraft: not only is maneuverability adversely affected but there is a good chance that your overloaded heavy bomber wont even get airborne! Trying to coax an over gross, fully armed buff out of ground effect and fly, dammit is something that does not come under the category of fun missions.

Provided that your airfield is reasonably intact (some types may be disallowed on certain fields if, for example, the bomber hangar or fighter hangar is destroyed), you should be able to jump into your selected airplane by clicking the desired direction of takeoff on the clipboard. Depending on the runway orientations, these are noted as the cardinal points of the compass (N, S, E & W) and as an H (for Hangar) in the center. Click on your choice, and lets rock. 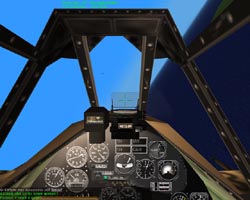