Thanks to Steve Judge Dicksons Sqzip extraction utility, fans of Janes WWII Fighters now have the ability to extract and modify the flight parameter files of the combat planes in the game. The flight modeling in WW2F has been called arcadish for various reasons, including an apparent lack of speed bleed during high-G turns, no accelerated stalls, automatic stall recovery, and no spins. Thus the desire of enthusiasts to modify the flight model, in the hopes of rectifying these non-realistic behaviors.

Analysis of the flight parameter files, or FLT files, has revealed major insights into the flight engine of the simulation. The flight engine of WW2F is the standard Six Degrees of Freedom model using Stability and Control Derivatives to compute the forces and moments that affect each aircraft.

This is a very solid and stable method to use, and has been used in other Janes simulations like F-15 and F/A-18. We will see that the engine is capable of producing more realistic flight behavior, but the exact implementation in WW2F also has hard-coded limits to realism.

The CX and CZ tables

In this article, we will deal with the modification of the most basic characteristics of each aircraft: the lift and drag curves that define a great deal of an aircrafts performance. The two basic tables we are concerned with are the CX and the CZ tables. These contain Axial Force and Normal Force coefficients for different flight conditions.

The first condition is the Elevator Deflection de tabulated in 12-degree increments. The five rows represent five elevator deflection conditions, with the 3rd row being zero deflection. The second condition is the aircraft Alpha a in 5-degree increments starting from 10° and ending at 45°. Given the aircrafts current Alpha and Elevator setting, the CX and CZ values are interpolated from the tables. 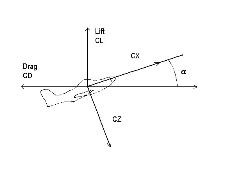 
The Axial Force and Normal Force coefficients, multiplied by the dynamic pressure q and the wing area S, produce the actual force magnitudes. These forces are NOT the Lift and Drag forces that many pilots (simulated or real life) are familiar with. The Axial and Normal forces are aligned with the aircrafts Body-Axis, while the Lift and Drag forces are aligned with the moving bodys Flight-Path Axis.