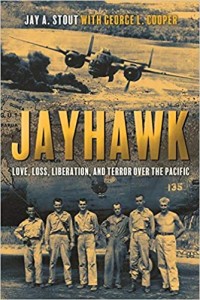 Title: Jayhawk: Love, Loss, Liberation, and Terror over the Pacific

LtCol (Ret) Jay A. Stout’s latest book, like the last two I reviewed (see below), is a work of narrative historical journalism.

Jayhawk traces the life and military career of B-25 bomber pilot George L. Cooper, who, at the time of this book’s publication in 2020, was still alive and well at 100 years of age.

Stout starts most chapters with a small vignette that illustrates the content of that chapter—be it the touching goodbye scene as he was about to leave Manila for the first time aboard a cargo ship headed to America, or a beautifully described scene of Cooper flying in a three-ship bomber formation just as the terrifying orange and black explosions of flak begin to reach for his plane.

In past books of Stout’s I’ve reviewed, he crafts his narrative from the personal letters of pilots and their families, after-action reports and military records. Much of this book, however, is from Stout’s in-person interviews with Cooper—so much so, that Cooper is given co-author status in the form of with George L. Cooper at the top of the book’s cover.

Of course, Stout doesn’t rely on Cooper’s accounts alone. As usual, Stout turns his microscopic and indefatigable eye toward the yellowed stacks of after action reports, military memos, news of the day, and personal accounts of others, to provide the broader context of the war and life in general as he traces not only Cooper’s life and military career, but also the lives of his parents and siblings living under Japanese occupation in Manila.

The story traces Cooper’s life from before his birth with details of how his American expat father met his Filipina mother while both were working as teachers on the island of Luzon in the Philippines. From there, the story moves on to Cooper’s almost idyllic life growing up as a child in an affluent area just outside of Manila after his father went into business. Armed with stacks of Cooper’s family letters, photos, and Cooper’s own memories, Stout paints a very heartwarming portrait of Cooper’s childhood days filled with fun and adventure both at home and in the surrounding jungle and waters of Manila Bay.

From there it follows Cooper’s journey to America with the intent of studying at his father’s university alma mater in Kansas, meeting his future wife Betty, enrollment in the USAAF air cadet training program, marriage, and on to becoming a B-25 bomber pilot

At this point, Stout starts interleaving the story of Cooper’s family experiences back in the Philippines under Japanese occupation as we follow Cooper’s life.  Throughout the book, the parallel stories of Cooper, his family, and his childhood friends who also went to war, are told to great dramatic effect. To paraphrase author Colin D. Heaton, who is quoted on this book’s back cover, this book isn’t simply the retelling of a combat pilot’s career, but a sweeping narrative worthy of a big screen drama.

The story then follows Cooper through his first tour in the Pacific Ocean Theater where he flies many perilous missions (more than his required quota, in fact) including the November 2nd Bombing of Rabaul. Cooper then completes his missions, returns home as a flight instructor, but signs up for a second tour as a both an A-20 and A-26 Invader pilot not only to help win the war, but also to have the opportunity to learn the fate of his parents and siblings still in Manila.

The book concludes with Cooper as an active combat pilot when the war ends in rather interesting circumstances which I’ll leave for those of you who read the book.

Because Stout had this unique first-hand source of information, I learned how it must’ve felt to leave one’s family in a warzone, then find oneself in the unique position of defending not just one’s own nation in the abstract sense, but also one’s own family who are trying to survive in the very warzone in which one is flying and fighting.

I also learned about the pilots’ and crews’ courageous acts of bravery, recklessness (sometimes fatal, sometimes not), and some of their deaths at the hands of the enemy, ignorance (sometimes their own, other times not), weather, and plain ol’ bad luck. And speaking of death in a combat zone, not all are in glorious battle. Stout recounts one of Cooper’s recollections on the death of a fellow squadron member that is so utterly random and capricious, it’ll leave you in disbelief that someone could be so unfortunate.

I also gained a far better appreciation for the combat abilities of the B-25 Mitchell, A-20 Havoc, and A-26 Invader bombers. Stout truly shines when describing how these aircraft operate, fly, and perform in normal flight and during combat, in good weather and bad. Much of these insights come from Cooper’s own recollections, but Stout brings a knowledge and perspective that makes for fascinating reading for the lay person.

As for the Pacific Ocean Theater of war, I’ve always heard and read stories of the fighter pilots, but this book gave me new insights into the  importance of the bombing campaign and the evolution of light and medium bombers in their close air support role. As an unexpected bonus, I also learned a few things about submarine warfare in the Pacific as well.

Outside of the combat tactics, because Stout had first-hand access to letters and recollections of those who lived under Japanese occupation in the Philippines, I learned, in graphic detail, of the senseless and horrific cruelty the occupying Japanese soldiers exacted upon both their POWs and the peaceful inhabitants of the Philippines. Stout pulls no punches in recounting these incidents, so be prepared if that sort of thing disturbs you.

Above all, I learned that George L. Cooper was a genuine war hero and has lead a long and remarkable life worthy of this excellent portrayal by Stout.

For the Combat Simulation Crowd:

I have to admit that I’m always been drawn to the excitement of single- and double-engine fighter plane dogfighting in WWII sims. However, after reading Stout’s book, I have a real hankering to fly at wave-top and tree-top height to drop parafrags on Japanese-held positions. I would also like to fire a burst of .50 cal. rounds from 8 or more forward-facing machine guns on an ammo dump or two.

Sadly, there is a serious dearth of medium and light American WWII bombers in my personal favourite combat simulation, IL-2 Sturmovik which only has the very under-gunned A-20B. I’m sure the developers did not include the more lethal bombers like the B-25H with its four .50 cal. machines guns AND a 75mm cannons in the nose ala the Barbie III, or the A-26B with the “eight-gun nose” .50 cal. machine guns option, because those variants would simply dominate and unbalance multiplayer gameplay. A single, on-target burst from either would simply vaporize any enemy fighter plane or bomber.

For you veterans of the Aces High franchise, version III has the A-20G and B-25 C and and the B-25H with its 8-forward facing machine guns and the massive 75mm cannon in the nose.

For developers of air combat simulations, you too may benefit from reading Stout’s book because it contains plenty of Cooper’s insights into the handling characteristics of the B-25 and a few of its peccadillos, too—both in terms of flight and weapons management (e.g., certain air combat maneuvers may actually disable your machine guns).

Should you pick up a copy of this book? If you’ve read and enjoyed any of Stout’s previous books, then of course, this is for you.

If you’ve never read any of Stout’s books, you’re in for a treat if you like historical narratives that blend drama while still remaining true to the facts.

Stout, in this reviewer’s opinion, is a gifted writer. He excels not only in terms of structuring compelling and engaging narratives, but he also succeeds in making real history accessible to all.  One cannot read any his books and not gain new insights into the courage and self-sacrifice of the pilots and the war in which they fought.  For me, I especially get a kick out of Stout’s seemingly innate ability to unearth the most peculiar and fascinating historical details of flying and fighting in machines that really just wanted to kill their pilots at every opportunity.

Other books by Jay A. Stout:

About Jay A. Stout:

Aside from his flying assignments, he served as the executive officer of 1st Air Naval Gunfire Liaison Company, and in a variety of additional assignments with various staffs around the world. During his twenty-year career he flew more than 4,500 flight hours, including 37 combat missions during Operation Desert Storm.

Lieutenant Colonel (ret) Stout has been published in various national journals and newspapers and his work has been read on the floor of the United States Senate. Articles published while he was on active duty addressed controversial topics (women in the military, the MV-22 Osprey, the Super Hornet, the effectiveness of the AV-8B Harrier, etc.). His opinions and viewpoints were often at odds with the service’s senior leadership; nevertheless his cogent arguments, logic and forthrightness earned respect and underscored his credibility. Stout has also written eight books—all published by mainstream publishing houses. Many of them won awards and all have been the subject of positive critical commentary.

Stout is a recognized military subject matter expert. He has appeared on the Fox News Network, Al Jazeera and National Public Radio as well as dozens of regional and local network affiliates.

Following his military career Stout worked for a very short time as an airline pilot before being furloughed after the terrorist attacks of September 11, 2001. He subsequently flew F/A-18s for the Kuwait Air Force for a year before returning to the States where he now works for as a senior analyst for a leading defense contractor.

For more information about Jay A. Stout, visit his website at https://www.jayastout.com/