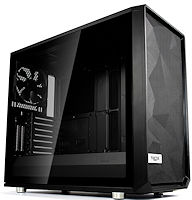 HEXUS readers were divided on their opinions of Fractal Design’s Meshify C when the mid-tower chassis launched back in 2017. One user called it “a case of arbitrary angle syndrome,” while another “quite liked the modern art vibe of the front mesh design.”

Said case was Fractal’s attempt to offer something different from its typically staid enclosures, and though we’re historically fond of the firm’s Define Series, it was nice to see Meshify mix things up a bit. We evidently weren’t alone, as sales of Meshify C were strong enough for Fractal to conjure up a larger alternative in the form of the Meshify S2.