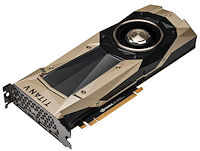 Out of nowhere, NVIDIA has revealed the NVIDIA Titan V today at the 2017 Neural Information Processing Systems conference, with CEO Jen-Hsun Huang flashing out the card on stage. A mere 7 months after Volta was announced with the Tesla V100 accelerator and the GV100 GPU inside it, NVIDIA continues its breakneck pace by releasing the GV100-powered Titan V, available for sale today. Aimed at a decidedly more compute-oriented market than ever before, the 815 mm2 behemoth die that is GV100 is now available to the broader public.