Escape from Tarkov New Year Event and the Load Testing

Battlestate Games kick off the load testing of the Escape from Tarkov game servers before the official start of the Open Beta testing at the beginning of 2018. Also the studio starts a holiday event which will allow the game to be purchased with a 25% discount during the week, and some of the users will receive a free 7-day access to the game. A full description of the event, participation requirements and instructions for redeeming the gift can be found on the project website in the news section.

Moreover developers released the last update of the game in 2017. This version of the game introduces the complete Shoreline map along with new weapons and weapon modifications, including AKMS, AKMN, Gyurza pistol and Trijicon REAP-IR thermal sight, as well as new equipment like customizable Ops-Core helmets. Moreover, several gameplay systems have been seriously redesigned, most importantly, deployment and extraction system, weapon mastering and dynamic changing of its size. Other notable changes include customization of helmets and head gear slots. The end of the Raid screen now features the opportunity to view the list of characters killed during the game session. Furthermore, players can now take dogtags off deceased enemies, which contain info on nickname, level and PMC affiliation. The complete list of new developments and changes can be found on the official project Forum and in social network communities.

At this point, users purchasing any game package get access to the Beta testing and can start playing immediately after purchase.

Learn more about the project testing plans and the estimated completion time frame, and purchase the game on the official website of the project.

My.com, developer and global publisher of Armored Warfare is thrilled to release its new expansion – Caribbean Crisis which adds a new game mode called ‘Special Operations’. This mode consists of a series challenging PvE missions which connect to an engaging overarching narrative. The first of these challenges will feature three new co-operative missions, set around the Panama Channel. The special operation will introduce a brand-new antagonist and enemy faction to the lore of Armored Warfare. By actively taking part, players will be able to shape the future of the story and lore of the game. Find out more about the new Armored Warfare – “Caribbean Crisis” expansion, check out some screenshots and watch the new announcement trailer HERE.

Armored Warfare is a free-to-play massively multiplayer online tactical military game that puts the player into the world of modern warfare. In Armored Warfare, players get a chance to try the most powerful tools of destruction invented by mankind – from modern main battle tanks to scouts and wheeled vehicles. Using modern defense systems like anti-missile protection and smoke grenades, along with various types of armor and ammunition, players can jump into fast paced battles both in PvP mode and a vast amount of PvE missions.

Find out more about Armored Warfare and download the game for free, visit the games official website.

The Christmas Truce of 1914 is going to be reenacted in Verdun once again this Winter, from December 21 to January 4! As in previous years, you’ll be able to get a taste of this unusual moment of peace and reflection in the midst of the enormous devastation of the First World War.

Between every few normal matches, players will experience the Christmas Truce event on a special map featuring football, snowball fights and Christmas cards which can be sent from the trenches by email or social media. Everyone who sends postcards to their loved ones has a chance of winning some WW1 Game Series swag, from Verdun / Tannenberg keys to a trench whistle or thermos. We’ll announce three winners everyday on this thread.

War Child is a charity working to help support children affected by war or living in conflict zones.

The FPS Verdun takes place on the Western Front between 1914 and 1918, in one of the bloodiest conflicts in world history. We were inspired by the infamous Battle of Verdun France in 1916. The game offers four distinct game-modes: Frontlines, Attrition, Rifle Deathmatch and Squad Defense. We have included many historically accurate features such as realistic WW1 weaponry, authentic uniforms, gore, and maps based on the real battlefields of France and Belgium.

Find out more about Verdun at the games official website.

This trailer offers a preview of The Resistance, an upcoming DLC pack for Call of Duty: WWII. Here’s word accompanying the clip:

Get a first look at each of the new MP maps, including Valkyrie, Anthropoid and Occupation, as well as the new War Mode experience and the next chapter of Nazi Zombies, The Darkest Shore.

Rise up against the enemy and take back your homeland.

The French Ground Forces research tree starts with a staggering amount of 35 vehicles from Rank I all the way to Rank VI, encompassing early tanks of the 1930s as well as modern vehicles from the late stages of the Cold War. The production of the most modern model in War Thunder, the AMX-30V2, began in 1982 and it is still in service today with several armies worldwide.

Together with the French Ground Forces comes the new combined battles location “Maginot Line”, portraying one of the sectors of France’s famous fortification line against Germany with its bunkers, a small town and even a medieval castle. Another new location, “Middle East”, sees combat between a ruined city and an oil plant located in the blazing desert sand.

A new reconnaissance game mechanic has been introduced for light tanks of all nations, which greatly expands the teamplay value for this type of vehicles. Now, light tanks can transmit information about enemy vehicles to their teammates and can assist all allies with repairs on the battlefield. More information about this is available HERE.

The air forces of War Thunder have received more than a dozen of new machines, including the twin-engined World War II machines Yak-2, Yak-4 for the Soviet Union and the British Whirlwind. New post-war fighters wait for the US and Japan, with the F3D-1 Skyknight and F-86-F40 Kyokko, respectively.

To celebrate the festive season, pilots and tankers of War Thunder can obtain unique Premium vehicles for free. For pilots, the P-40C for the USA and a captured Fw 190 A-8 in the French tree are available, while tankers can get the British wheeled armored car AEK Mark II, which is equipped with a tank turret, and a German Panther tank that is disguised as an American M10 tank destroyer. Specifically created for the New Year’s marathon this year, these vehicles can only be obtained during this event by fulfilling specific tasks available from 22 December to 22 January. Further rewards include boosters, decals and 3D decorative items. 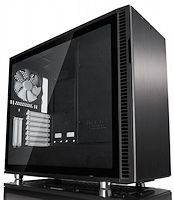 Fractal Design’s Refine series focuses on providing a sleek and silent case that doesn’t cut corners with regards to quality and design. Previous releases like the Define R5 have been very popular with users wanting a high-end feature set that is paired up with near-silent operation. Today we are taking a look at Fractal Design’s latest case in the Define series, the R6. The Define R6 has been designed from the ground up and incorporates many of the features that the Define series is known for, like sound-dampened side panels, tons of fan filtering, and ModuVent technology, and adds popular new features like seamless tempered glass, and a built-in fan hub. Can the R6 continue to carry the torch for Fractal Design and their Define series? Let’s find out!

There are still a couple of known issues but those should be cleared up with the next release.

As was the case with earlier drivers, the new Radeon Software Adrenalin Edition 17.12.2 drivers support all graphics cards since Radeon HD 7700/HD 7900 days and are available for Windows 10 and Windows 7 in both 32-bit and 64-bit versions.

NVIDIA has released the latest version of their GeForce software suite. Version 388.71 is a game-ready one, which brings the best performance profile for the phenomenon that is Player Unknown’s BattleGrounds. For professionals, there’s added support for CUDA 9.1, and Warframe SLI profiles have been updated. There are also many 3D Vision profiles that have been updated for this release, so make sure to check them out after the break, alongside other bug fixes and known issues.

You can download the new GeForce 388.71 WHQL Game Ready Graphics Drivers from GeForce Experience and GeForce.com.