By Ian Boudreau @ The Wargamer

Now approaching its sixteenth year, the U.S.-led war in Afghanistan is the longest armed conflict in American history, and arguably one of the most difficult to capture in a wargame format. That’s probably why Afghanistan ‘11 isn’t really a wargame, but rather a strategy game about a specific kind of war: counterinsurgency. As such, the game is less concerned with enemy casualty counts and focuses instead of the decidedly fuzzier notion of “winning hearts and minds” as laid out in the COIN theory.

Paradox Interactive, a publisher with a robust video division, today released the first trailer made with in-game footage of Steel Division: Normandy 44. Developed by the veteran strategy-game creators at Eugen Systems, Steel Division: Normandy 44 is an upcoming tactical real-time strategy game for Windows PCs that puts players in command of World War II military divisions. Featuring historically accurate units and environments as displayed in Eugen’s IRISZOOM engine, the game allows for battles to play out in extreme detail whether viewed from a broad overhead perspective or while focused on a single unit.

See Steel Division: Normandy 44 in action and envision your own division with the new gameplay trailer.

This weekend, Paradox and Eugen will be featuring several live streams of Steel Division: Normandy 44 from the show floor of EGX Rezzed in London. Multiplayer games will be broadcast featuring developers and show attendees, and game features will be highlighted in a developer stream on Paradox’s Twitch channel. All streams will be available at https://www.twitch.tv/paradoxinteractive, and the stream schedule will be as follows:

Origin now offers They Shall Not Pass, the first DLC pack for Battlefield 1, the World War I shooter. Here’s word on what this offers:

Two new voices join the multiplayer action in Call of Duty: Infinite Warfare with the Method Man and U.K. Special Forces Voice Over Packs now available on PlayStation 4 and Xbox One and PC soon after. A unique way to personalize and enhance the multiplayer experience, VO packs replace the standard in-game commentary with custom dialogue narrated by recognizable characters from Call of Duty and beyond.

“Infinite Warfare is all about customizing your multiplayer experience to suit the way you want to play,” said Dave Stohl, Studio Head of Infinity Ward. “We’ve built the game around the ability to personalise your rigs, loadouts and weapons in really cool ways, so now we’re taking it a step further. What better way than to change up your MP commentator? It’s a ton of fun and we hope fans will get a kick out of what we have in store.”

The Method Man VO Pack features the legendary hip hop artist from the Wu-Tang Clan, guiding you through multiplayer combat. The American rapper, producer and actor dials up the intensity, updating you on killstreaks, enemy activity and adding some extra flavor to every MP firefight.

Kriegsmarine is the upcoming DLC for the Order of Battle series and it covers the German Navy’s efforts to challenge Allied superiority at sea. From the shores of the Baltic to the deep waters of the Atlantic Ocean, you will lead a smaller varied fleet of destroyers, cruisers and battleships, submarines, seaplanes tenders and carriers, as well as Marines units specialized in amphibious assaults.

This DLC marks, of course, a return to naval mechanics. The team has put a lot of focus in expanding the naval aspects of the series with Kriegsmarine, and to best represent naval warfare they implemented several new features. Let’s look at them, shall we?

After the victory at Ligny and at Quatre Bras (even if this latter less decisive), the French have forced Wellington’s Anglo-allied army to a defensive re-deployment at Waterloo. To avoid any interference from the Prussians, the aile droite of the l’Armée du Nord lead by Marshal Groucy is sent, consisting of 33,000 men and 80 guns.

The Battle of Wavre is about to commence!

Get more information about Scourge of War: Wavre from its official product page!

Scourge of War: Wavre Strategy and Wargaming | Donster | March 29, 2017 |
Take a Tour of the Safe House in Sniper: Ghost Warrior 3

Every soldier needs a safe place to rest, recuperate and gear up for his or her next mission. Today, CI Games invites you into the welcoming environs of the Jon North’s Safe House in Sniper: Ghost Warrior 3.

As one may predict by the name, the Safe House is a safe place where our lead protagonist can sleep to a designated hour, craft and purchase items, choose equipment loadouts and begin missions. There are different safe houses to be discovered in the northern part of the Republic of Georgia, many of which contain loot or new weapons to equip. After they’re discovered, players can fast travel back to these locations as long as they aren’t in a designated mission area.

Listed below are some key things players can access in the Safe House:

The Weapon Cache is a place where the player can change his or her loadouts. Primary weapons, secondary weapons, side-arms, gadgets, weapon skins and armors can be purchased and equipped here.

At the Workbench, the player is able to craft regular and special bullets, gadgets and medkits using resources found in the world. There are five kinds of resources, each used in different proportions to craft different equipment such as special bullets, gadgets, and modify weapons and attachments.
The currency in Sniper: Ghost Warrior 3 is called ‘Trading Goods’. Player can purchase almost everything available in game for it – starting of grenades and medkits, ending with weapons. The Trading Goods can be acquired by various actions during gameplay: completing main story missions, completing side operations, finding collectibles, assassinating most wanted targets, helping civilians or just simply found in the world.

Gadgets/ combat gear are a large set of tools available through crafting or purchase that will help players execute their planned approach. These gadgets differ in their intended use, ranging from offensive frag grenades to defensive warning devices, but it’s ultimately up to players to choose how they’d want to use them.

It’s worth noting that the source behind this leak is the same one that also leaked Call of Duty: Infinite Warfare a year ago. Not only that, but the title font appears to be similar to what Activision has been using, so this seems like the real deal.

The leaked images show that Call of Duty 2017, developed by Sledgehammer Games, will take place during the World War II era.

The images above show artwork that Activision appears to be creating for promotional images for the title. It also appears that Activision has decided to be straightforward with the naming scheme for the game and call it ‘Call of Duty: WWII’. This would be, probably, the simplest name for a Call of Duty game since before Call of Duty 4: Modern Warfare. 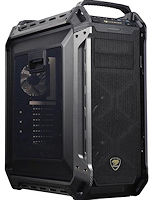 The Cougar Panzer Max is a full-tower representation of the Panzer chassis. It is larger, bulkier, has more space, and looks a lot more menacing to boot. It really does look like a tank, which is what “Panzer” means in German. So, in this review, we take the Panzer Max for a joy ride, fill it with some ammunition, and see if it is a straight shooter.