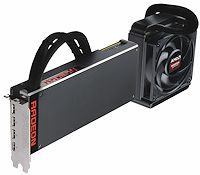 These recent years we have seen a slow but steady buildup of VR from both technological developments to growing enthusiasm shown by consumers and the industry. Today AMD is releasing the Radeon Pro Duo to the market as their first card targeted at VR developers. This card is not being directly aimed at gamers, despite the capability under the hood, but focuses on official support for professional software. Additionally, multiple initiatives are being both spearheaded and supported by AMD and others to encourage growth in the VR sector.