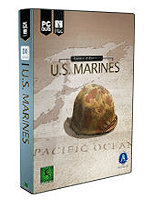 “The fruits of victory are tumbling into our mouths too quickly” – Japanese Emperor Hirohito, 1942

6 months after Pearl Harbour, the Greater East Asia Co-Prosperity Sphere has reached its peak of expansion. Australia and New Zealand are under direct threat, weakening more and more the American ability to intervene in the Pacific.

Only decisive actions to take the initiative could allow the Allies to re-establish a naval and air superiority over the Imperial Army.

Today we are announcing a new chapter in the series, adding a new challenging set of scenarios and a new faction: the US Marines Corps!

From the product page:

“As the fighting progresses across small, isolated jungle islands, the Japanese adapt their strategy from ruthless assaults to deep, well-prepared defensive systems – determined to hold on and fight to the last man.”

This expansion has opened its gates to Beta testers and we are inviting all the players to enlist and to concur in defining this great milestone!

You can apply for the Beta from here!

Order of Battle: US Marines will be available also on Steam!